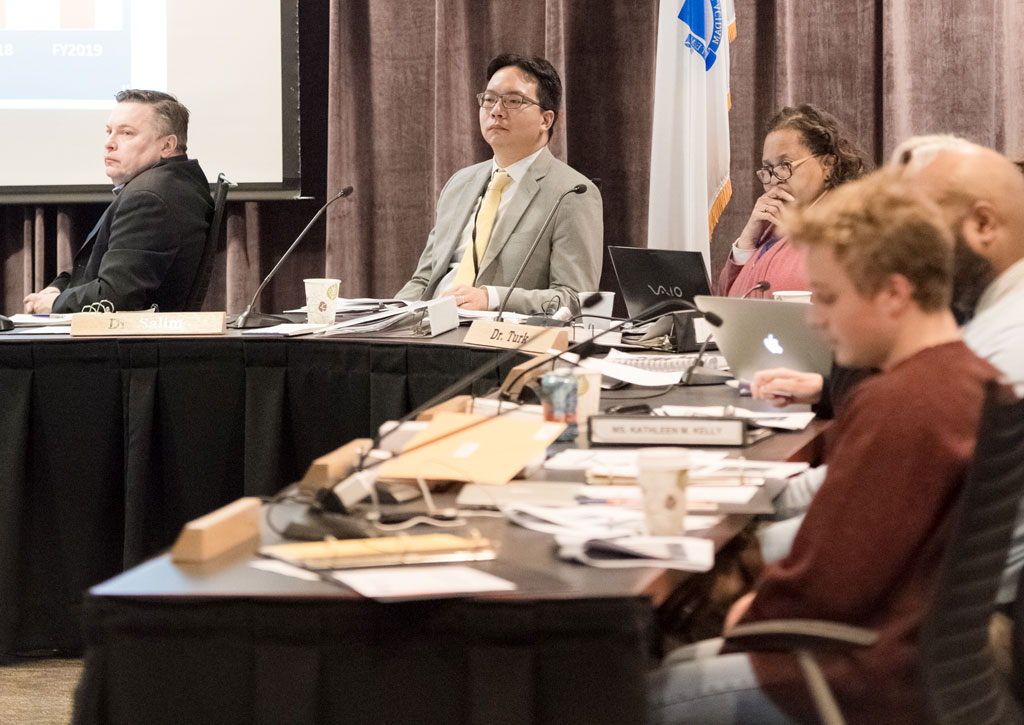 Up $8.1 million, but a lower percentage hike than in recent years
By Jean Cummings

A preliminary schools budget of $191.1 million was proposed by Superintendent Kenneth Salim at a March 15 special School Committee meeting – a $8.1 million increase, which at 4.4 percent is slightly lower than the annual increases of the past three years. Property tax revenues, which cover 87 percent of the budget, are due to increase by $8.5 million.

The bulk of the total budget increase, as usual, goes to enrollment-based and contract-determined salary increases and inflation adjustments, notably in transportation costs. Just over $1.1 million of the $8.1 million is allocated for nine major new initiatives. In addition, there is $136,000 under “budget adjustments” going to notable increased school supports. The district is estimating an additional 178 more students.

Each of the nine initiatives is linked to the multiyear District Plan Framework, Salim said, which names five “strategic objectives” to focus on: equity and access, engaging learning, “the whole child,” partnerships and continuous improvement.

Equity and access. The proposed budget expands the honors-for-everyone Level Up English classes approach for all first-year students at Cambridge Rindge and Latin School to include world history. Each course will still be “one semester,” but will be taught every other day for the entire year, alternating daily between history and English. Principal Damon Smith has reported high staff satisfaction that the program “is working” to fully engage all students in honors-level work, although he was unable to provide data on student performance with the course still midway and state standardized testing still to come. (MCAS testing begins next week, but data are typically not available until the following fall.)

An enhanced seventh-grade math program eliminates the recent separation into two streams:  What is considered eighth-grade math, or an accelerated program aimed at students’ passing the ninth-grade algebra test at the end of middle school. Staff are describing this as a “new model” – not a return to the previous, heterogeneous class that left many students unprepared and many other students forced to move too slowly – with more teacher professional development, “enhanced curriculum materials” and additional math interventionists.

This year’s high school “1:1” technology initiative providing free Chromebooks to all first-year students expands to the rest of the students and starts the rollout of in-school Chromebooks to upper schools, followed by elementary schools (down through third grade). Existing cultural proficiency work will expand to reach more educators and administrators and support student-and teacher-led activities and training.

A partnership with Boston University and the W.K. Kellogg Foundation is beginning under the guidance of new diversity director Ramon de Jesus to support Cambridge paraprofessionals in completing a master’s degree in education toward teacher certification. The initiative is part of a goal of raising the number of teachers of color; paraprofessional staff are notably diverse.

Though presented as “budget adjustments” instead of “new initiatives,” there is also funding for field trip buses to ensure that every school has the same minimum number of resources (a request that arose from school-based parent organizations who wanted to level the playing field for schools with different family resources); increases in school-based discretionary funds; and modest increases to two community partners that provide student mentoring, coaching and access to work experiences.

Provide engaging learning. A teacher-driven Design Lab initiated with the current year’s budget will continue to fund a one-half salary for a coach who helps teachers create and implement “novel solutions through design-based problem-solving.”

Supporting the whole child. One additional social worker is proposed to work at the Kennedy-Longfellow and Graham & Parks schools to focus on the social-emotional well-being of students and provide coaching for school-based teams, such as math teachers of all grades in a school.

Partnerships. There’s a proposed $10,000 funding increase (to $55,000) for the CRLS Enroot program that provides academic and job-searching supports for qualified immigrant students; and a $16,000 increase (to $180,000) to the Cambridge Housing Authority Workforce program, which coaches and mentors high school students, now up to two years after graduation.

Continuous Improvement. A second data evaluator will be added to last year’s hire to continue improving “data-informed decision-making at all levels” of staff.

The general shape of the budget – which gets a committee hearing process before going to the City Council in May for an up-or-down vote – does not change much from year to year. Staff accounts for four-fifths of the budget; out-of-district tuition and busing costs are substantial, and continue to rise significantly; rising costs for maintaining 17 school buildings, some getting fairly old, is beginning to be balanced by energy costs leveling off because of energy improvements such as the green energy efficient Martin Luther King Jr./Putnam Avenue Upper School building.

Staff. As is typical, about 82 percent of the budget goes to employee salaries and benefits (and 89 percent of these funds go to school-based staff). Of the proposed $157.1 million staff expenditures, enrollment-based increases drive $2.6 million for new staff positions – primarily due to three new first-grade classrooms (but one fewer kindergarten class); new separate special education classes (such as the Autism Spectrum Disorder and Special Start programs); and three teachers and four paraprofessional “reserve positions,” to be filled as needs evolve (two existing vacant Sheltered English Immersion positions will also continue to be held in reserve). Fourteen new staff members for the nine new initiatives are also included. Central administration staff costs are about $5.5 million.

The only new positions proposed for the high school are three full-time equivalent staff to support the ninth-grade Level Up expansion into world history.

Transportation. Total transportation costs are budgeted at $9.2 million. Bus costs have risen dramatically in recent years – 47 percent from 2014, the budget reported, and will be up $800,000 from this year. Limited competition (the last bid brought one bidder) and housing developments requiring additional bus routes, such as from Cambridge Crossing in East Cambridge, have driven up costs. A little less than half of bus costs go to regular and sports buses; special education buses cost $4.5 million, buses for homeless students put up in other districts costs $280,000, and busing for students to out-of-district vocational schools costs $60,000.

Out-of-district tuition is projected to be $16.9 million next year for about 170 students. The school department’s share will be $9.1 million; the rest come from federal and state funds. Costs continue to rise, although this year Cambridge’s share of costs dropped for the first time in years. Out-of-district vocational school tuition is another $75,000.

Technology. Technology costs are projected at $1.6 million, with a $130,000 increase that includes $109,000 for the enhanced Chromebook rollout. The district is moving to a five-year hardware replacement model from a more optimistic six-year one.

Other supplies and services stay the same as the current year, at $3.3 million. 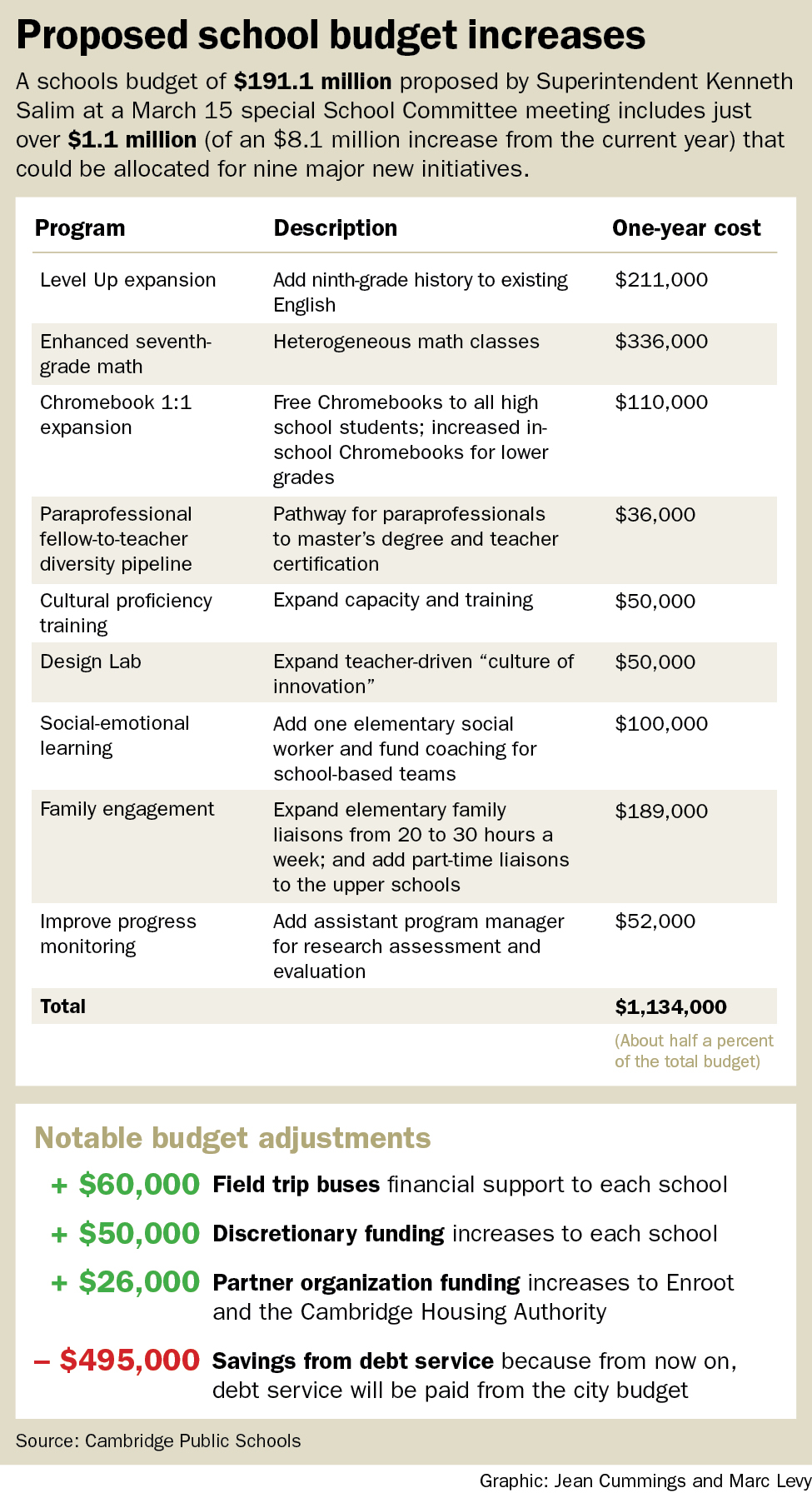 Member Kathleen Kelly, who co-chaired the budget subcommittee for the past two terms, had a “very positive feeling about this budget. The emphasis on equity is very clear to me.”

Current budget co-chairman Fred Fantini also had praise, noting several items he was happy to see: family liaisons in the upper schools, expanded partner support and a pipeline for paraprofessionals to become teachers. Like every year, he gave a list of ideas he’d like to see implemented, such as getting partner organizations full access to the student computer system to better know and share about students, or using popular phone apps to better connect to families.

“Kudos for always delivering a high-quality product,” said Manikka Bowman of the budget, but she had some questions, including concerns about changes in the seventh-grade math program. “It’s no secret our district has some trouble meeting the needs around advanced learners,” she said, noting that there are also dangerous “assumptions” about the demographics of advanced learners – presumably that they are mostly white and wealthier.

Salim responded that the change to heterogeneous math in seventh grade is not just about adding teachers to the mix, but “a strategic approach around existing staff as well, much as with Level Up.”

Co-chairwoman of the budget subcommittee Emily Dexter praised the quality and clarity of the presentation and budget documents, listing several things “that are very right about our schools” (facilities, focus on social equity and high school extracurriculars), but returned to a favorite theme: expanding resources for younger students.

“There are really good ideas here. I appreciate the work,” she said. “But are there enough resources in this budget to dig deep?” Noting the funds for Chromebooks, professional training and an outside consultant for reviewing bus needs, she asked if the district has enough social workers, guidance counselors, family liaison hours and math support or high school teachers, given that there are expected to be another 60 first-year students next year.

Patty Nolan also had several questions about specifics and implementation of the new math approach. Like Dexter, she has a regular theme: Is Salim’s emphasis on collecting and analyzing data shedding light on longer-standing programs and projects in the district? Salim tried to reassure that he is incorporating lessons in new approaches.

Mayor Marc McGovern wondered about the long-standing call from teachers and parents for “more hearts and hands in the classroom. Can you explain the process of deciding not to add more folks in classroom?”

Salim said that the new budget does call for 39 new positions (22 due to enrollment increases in special education and elementary school enrollment). He said they approached this budget with an eye to “aligning with our priorities” in the District Plan.