Ending ‘tracking’ at high school is working, staff says, but so far that’s more of a feeling 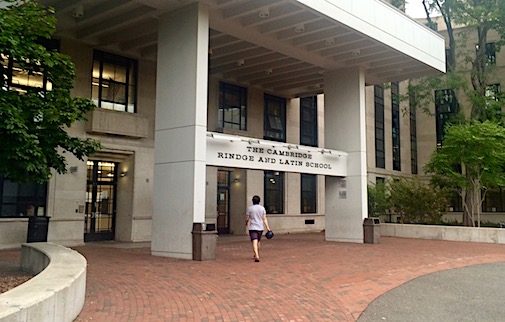 Ending ‘tracking’ at high school is working, staff says, but so far that’s more of a feeling

A program at Cambridge Rindge and Latin School called Level Up is due to expand next school year by topic and grade. (Photo: Marc Levy)

The “Level Up” program of English classes combined for all ninth-graders – undoing a structure described as making two different high schools, separated largely by family income and race – got an enthusiastic progress report Tuesday to a School Committee roundtable meeting, though staff said it is too early in the school year to provide much solid data.

As of this past fall, all ninth-graders take honors-level English; Level Up for world history was postponed at the request of Superintendent Kenneth Salim, who wanted to “get it right” in English first. But next year students will take English and history on alternative days.

Level Up English will also extend to 10th-graders next year, according to a presentation by Principal Damon Smith, key deans and classroom teachers.

It was news to the School Committee, but there was no discussion or questions about it.

Unusually for the school, Level Up courses last an entire year; in the traditional CRLS block schedule, one year is usually completed in a semester, with students meeting 80 minutes each day. In the first year, students who need help keeping up have been taking an “English seminar” on alternate days – small classes with targeted writing and reading support. There are about 90 students in these seminars, staff reported. Other students alternate English with required health or physical education classes, which will presumably be the support seminar alternates next year.

In addition to capitalizing on deep outside expertise, the course has adopted a technical tool, SchoolCity, where students submit work for quick feedback from teachers. It allows “a deep dive into data [and a] complete profile of student performance,” teacher Jennifer Hogue said, more so than the Google Docs used schoolwide, and similar to what’s used in MCAS standardized testing.

This common online assessment provides consistency across sections, Hogue said, and eliminates “perceptions about different teachers not doing the same work” that pervaded in previous years.

Data from SchoolCity, though, were not available yet, staff said, because two snow days delayed entry of midterm scores. (January is finals time for other classes, but the every-other-day, full-year schedule for this course makes it midterms time.) Sample reports with fake data were presented showing how SchoolCity can generate reports quickly showing scores by population subgroups; whether students got partial credit on specific answers; and feedback to students on time spent on each question and what they got wrong. Next year, too, this spring’s MCAS scores can be compared with students’ eighth-grade MCAS scores.

Staff were clearly encouraged, and said students who may have been destined for CP classes were newly inspired to do honors work. CP classes had been beset with behavioral issues, with discouraged students “checking out,” but teacher Drew Kreiser said that this year’s classroom “vibe” feels much better. “There is a level of engagement that is infectious,” he said. “It lifts the level of everybody in the room.”

CRLS’ lead special education teacher, Desiree Phillips, said she couldn’t provide data on behavior immediately, but her observation of classes showed “a noticeable difference in the level of engagement and behavioral issues.” While there is a “pretty large” cohort of Autism Spectrum Disorder ninth-graders in general education, there is also added support on special education needs, including ongoing coordination and staff training and an emphasis on helping general education teachers recognize signs of stress and anxiety so they are “mirroring the work a social worker might do to help divert a crisis and to help kids work through challenges.”

A student survey issued in the fall showed 89 percent of first-year students saying they plan to take more honors English courses. This compares favorably with last spring, when 56 percent of 10th- through 12th-grade students had enrolled in at least one honors or advanced placement course. 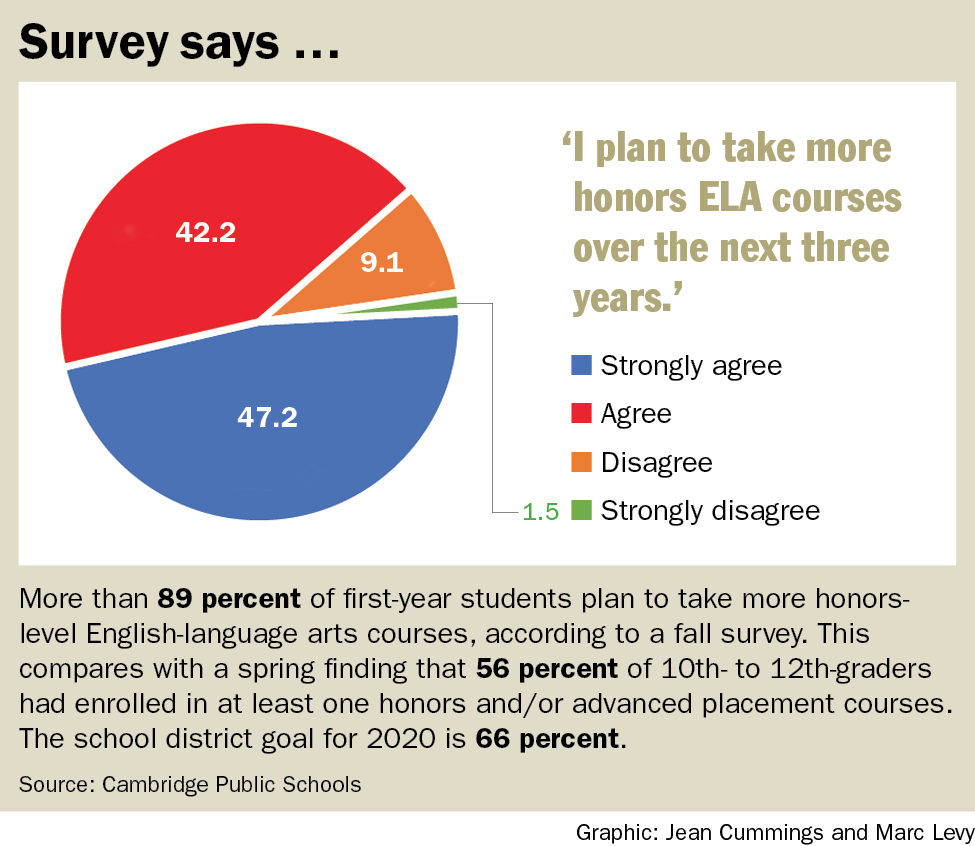 One student gave compelling testimony on the changes. “Coming into CRLS this year I didn’t feel I was capable of doing honors,” he said. “This class is helping me feel confident in myself to do better things in my [future] schedule.” He also praised his support seminar, which he said was like a “little family”: “We help each other with everything. We have a great bond.”

Another student said, “I think it’s awesome. It’s a great idea for people to be exposed to more and be pushed so they know they can do it.”

Is it honors level?

The second student, however, also raised the notion that “many students say that now that everyone’s in the class it’s not an honors class anymore.” They are wrong, she said. “I consider myself an honors student.” Student school council member Paul Sullivan agreed that he has heard many students say that about the course, and suggested that there be more education about opportunity gaps embedded in curriculum starting in kindergarten.

Smith pushed back on the “preconceived notions” of students entering school without knowledge of what ninth-grade honors is. “It may not feel to some that it is rigorous enough, but that’s intentional,” he said.

Kreiser, the teacher, said that the first book assigned (“Bronx Masquerade” by Nikki Grimes) was a young adult novel that “many kids thought [was] an easy book. But for good conversation, sometimes you don’t want the hardest passage. So you can do a higher skill level with easier accessed reading.”

The fact that the course is yearlong can blur perceptions of the amount of work assigned: As a one-semester block course, the course would be only two months in. The perceptions that teachers previously “did different things” also presumably makes it difficult to measure what an honors-level course looked like. Staff did not present information comparing previous honors curricula with Level Up: What did students read? How much did they write?

All School Committee members gave enthusiastic support, praising staff energy and commitment. But many focused on the need to measure success.

“I think this is magnificent,” Manikka Bowman said. “And I also think it is really important – particularly because it is a pilot – that you need to have something at the end of the year to celebrate. Not clearly identifying what those things are puts you on the defensive. We get ourselves in trouble here when we launch a lot of pilots … and don’t put accountability measures in.”

Patty Nolan agreed, also pointing to the student survey. “I’ve shown it to three social scientists,” she said, “and they say it is not a good survey.” The fall version, she pointed out, asked nothing about whether the student felt challenged. (Staff said the question will be in the spring version.) The two pages are mostly agree/disagree statements of beliefs, such as “I feel I have the skills to contribute to the discussion in my ELA Honors class,” or “Having classmates of different racial backgrounds is beneficial to my learning.” The survey can be viewed here.

Members Laurance Kimbrough and Fred Fantini pushed for more communication between the school and families about what goes on in the class and the status of student assessments.

Members also worried about what the wide ranges of student skills and self-perception coming into ninth grade say about the work being done in K-8 classes, which are taught with all students in one class.