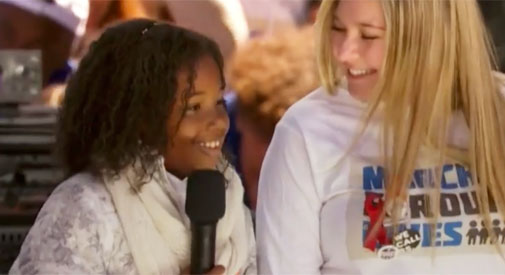 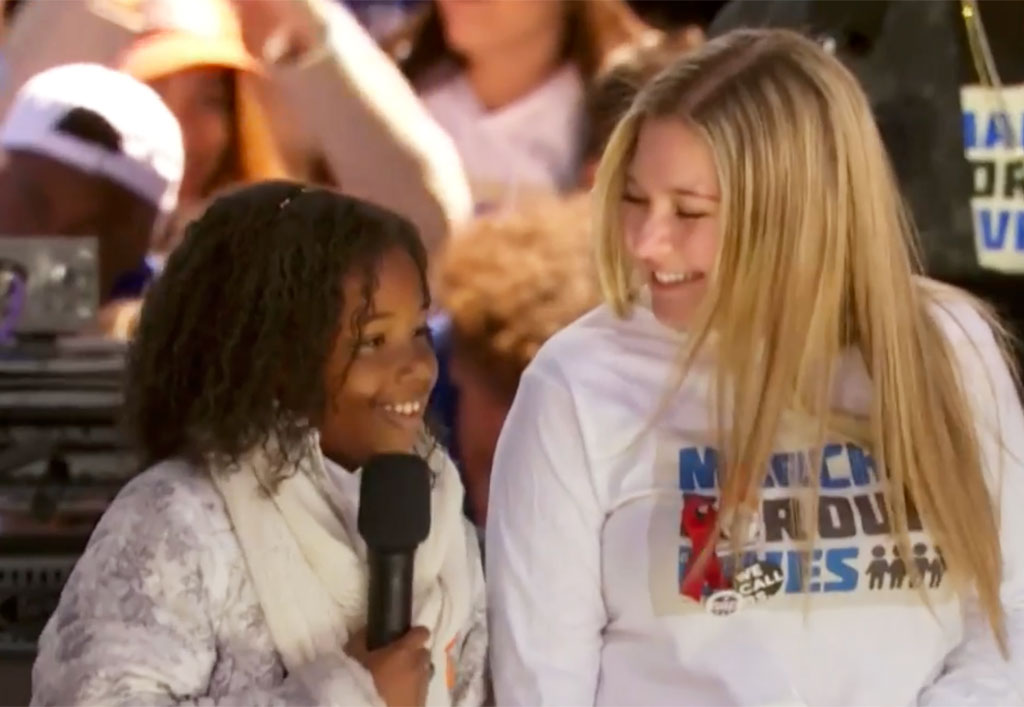 Yolanda Renee King, 9, onstage at the March for Our Lives in Washington, D.C., on March 24, with school shooting survivor Jaclyn Corin.

Today’s 50th anniversary of the Rev. Dr. Martin Luther King Jr.’s assassination is a searing reminder of unaddressed gun violence in America. And, because gun violence has gone unaddressed for half a century, the generations of children residing in a safer and healthier America that MLK dreamed of in his speeches now live in fear of guns – when they are not running from them.

King would have been proud of the student-led March for Our Lives for gun safety laws that took place in Washington, D. C., last month. It demonstrated the collective power of children and teen activists to shame and to bring recalcitrant Second Amendment advocate lawmakers to their knees, like the “Children’s Crusade” of 1963 did in Birmingham, Alabama. The Children’s Crusade braved arrest, firehoses and police dogs to bring to the nation’s attention their state’s unrelenting segregation laws.

And one of the surprise guest speakers was 9-year-old Yolanda Renee King, his granddaughter.

Like the hundreds of thousands of children and teens who came to the nation’s capital with the mission to end school shootings, she told the audience, “My grandfather had a dream that his four little children will not be judged by the color of the skin, but the content of their character.” Standing on stage alongside one of the survivors of the Marjory Stoneman Douglas High School  shooting in Parkland, Florida, she continued:“I have a dream that enough is enough. And that this should be a gun-free world, period.”

As I watched King’s cherubic-looking granddaughter deliver her speech to a cheering crowd, I nearly cried realizing she never met her grandfather, because a bullet shortened his life.

King wrote in his “Letter from the Birmingham Jail” in April 1963 that “Whatever affects one directly, affects all indirectly … This is the interrelated structure of reality.” In 2018, no one could have fathomed the No. 1 issue all American school-age children face is an epidemic of school shootings – whether in wealthy suburbs such as Newtown, Connecticut, and Parkland or urban cities such as Chicago and Baltimore. Gun violence is killing our children, and gun reform continues to be that hot-button issue as a country we can’t seem to budge on.

It was a similar problem 50 years ago.

President Lyndon B. Johnson thought so too. Johnson wrote to Congress requesting stronger gun laws in the wake of RFK’s death. “Far too many [guns] were bought by the demented, the deranged, the hardened criminal and the convict, the addict and the alcoholic. So today I call upon the Congress in the name of sanity … and in the name of an aroused nation – to give us the gun control law it needs.”

Then King’s assassination shocked the nation. The alleged weapon was the Remington 30-06 hunting rifle, a weapon easily obtained then, like the AR-15 – used in Parkland – is today.

Johnson redoubled his efforts to get sensible gun laws in place with each act of gun violence, unlike President Donald Trump, but the National Rifle Association and others mobilized in opposition. Johnson passed landmark civil rights legislation during his tenure, but with licensing and registration blocked from his bill, he could not make a significant dent on gun reform.

There were 17 school shootings before March was even over. The high volume can be pinned on the NRA and its allies employing similar tactics used 50 years ago to obstruct gun safety legislation. No one could have fathomed the NRA would use those same tactics against the safety of our children.

But our children have spoken up, and they want sweeping new gun control laws now, and not crumbs.

King’s assassination is a glaring reminder of what happens to a generation when an issue such as gun safety goes unaddressed. In his famous “I Have a Dream” speech he said, “Now is the time to make justice a reality for all of God’s children. It would be fatal for the nation to overlook the urgency of the moment.” I’m hoping lawmakers listen this time.