‘Belle de Jour’: Surreal and sexy provocation from the ’60s is back for Kendall Square run 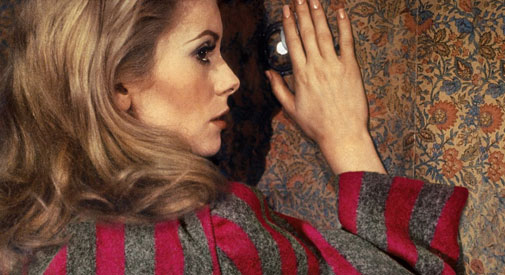 ‘Belle de Jour’: Surreal and sexy provocation from the ’60s is back for Kendall Square run

Hard to believe it’s been 50 years since Luis Buñuel’s “Belle de Jour” caused a minor stir by chronicling the soul-searching of a bored Parisian housewife who, for obscure reasons, takes up part-time work as a high-class call girl. Provocative and erotic but never base or graphic, the film’s a deep dive into the psyche of its heroine; entwined in fantasy and fulfillment, the film gives Buñuel, a deft surrealist (“The Discreet Charm of the Bourgeoisie” his signature work), opportunity to reach into his bag of tricks and smudge the edges of reality the way Dalí or Munch might on a canvas. 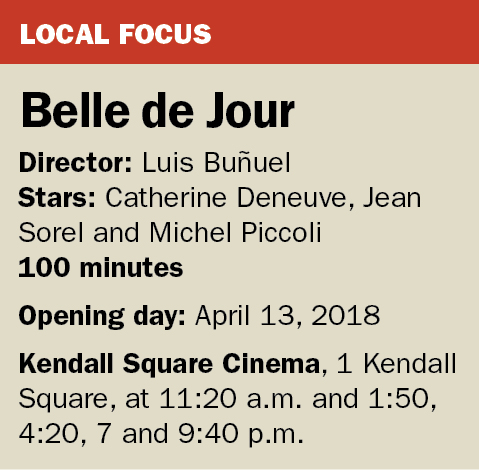 On the outside Séverine (Catherine Deneuve) has it all: a spacious flat in a nice neighborhood and a classic, good-looking husband by the name of Pierre (Jean Sorel) who works long hours as a surgeon. Everything’s perfect, yet there’s an aloofness and conflict behind her wide, luminescent eyes. The film begins with Pierre and Séverine in a horse-drawn carriage ambling though the countryside when Pierre orders its driver to halt and his assistants to assail her. It’s one of the many fantasies we get from Séverine’s point of view. In another she’s dressed in a virginal white gown and men throw mud and perhaps worse at her – thoughts of Pasolini’s “Salò” well up.

The carriage bell, the beat of hooves and the mewling of cats work their way mysteriously into scenes within the flat and brothel. What’s it all mean, and what of Séverine‘s masochistic fantasies? A troubled childhood? The desire to break free of a coddled life, yet an unwillingness to jump? A self-destructive bent to feel alive? Perhaps simply the intoxication of strange men in strange places? It’s a tease throughout, and the real-world pairings as arranged by Madame Anais (Geneviève Page) are almost as far out as Séverine’s fantasies, especially the client who demands that she dress up like his recently deceased daughter. Then there’s the gangster who gets freebies on the house, and the obsessed john who follows Séverine home. Ever lurking too is Pierre’s buddy Henri (Michel Piccoli, who has the mug of a mortician) who’s on to Séverine’s game and quite taken by her seeming piety and the wild side just beneath. Séverine outwardly loathes him. “Keep your compliments to yourself,” she tells him.

Deneuve, who also starred in Jacques Demy’s “The Young Girls of Rochefort” in 1967 and two years earlier teamed with Roman Polanski for the brilliantly eerie psychosexual thriller “Repulsion,” tackles the tough assignment with aplomb. It’s hard to believe the film could have worked with any other actress. Some might compare the performance with that of Nicole Kidman in Stanley Kubrick’s “Eyes Wide Shut” (1999), but as effective as Kidman is in that film, she’s nowhere near as compelling as Deneuve, who balances the line between icy blonde beauty and sensual temptress as seamlessly as Buñuel toggles between the realms of the real and surreal. Their partnering couldn’t be any more mutually enriching.

Interestingly too, the material the film is based on – Joseph Kessel’s novel – was published back in 1928, around the time Austrian author Arthur Schnitzler wrote a somewhat similar tale of upper-crust lust titled “Rhapsody” that Stanley Kubrick would spin into “Eyes Wide Shut.” Clearly, pent-up male sexual frustration was a broad, sweeping thing in post-WWI Europe.

“Belle de Jour” is both spot on for this era and dated. Women relegated to the kitchen or the boudoir serve as a reminder of a more chauvinistic time, but Séverine won’t be stopped by any force – male, female or otherwise, from taking charge of her destiny, even if in the shadows.

Strangely enough, the 50th anniversary print of “Belle de Jour” starts a run at the Kendall Square Cinema today opposite “You Were Never Really Here,” a film that also features a high-end brothel and a very different character journey.