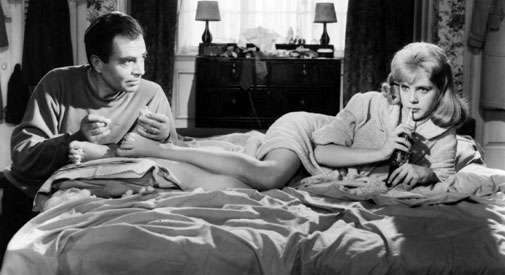 The Boston Calling music festival comes Friday to the Harvard Athletic Complex, but abutting that (date wise) on this side of The Charles is its Boston Calling Film Festival, running Tuesday through Thursday and curated by Academy Award-winning actress and Harvard alum Natalie Portman. Her entertainment sidebar at last year’s music showcase was canceled; how that transmuted into the three-day “Female Gaze” lineup at the Brattle Theatre is a bit unclear – Portman, Boston Calling and others involved in programming have been tight-lipped.

Not that any of that matters; the seven films featuring strong female protagonists and feminist themes fold nicely in with the Brattle’s “A Year of Women in Cinema” focus. Classic staples bookend the slate, beginning with Stanley Kubrick’s adaptation of Nabokov’s timeless taboo tale, “Lolita” (1962) and concluding with William Friedkin’s viscerally chilling “The Exorcist” (1973), a thinking man’s horror film that changed the way a generation looked at split pea soup.  “Lolita” pairs with “The Holy Girl” (2004) directed by Lucretia Martel, an Argentinian flip of Kubrick’s film – in a way – as a young girl looks to save a doctor with unholy sexual proclivities. Likewise, “The Exorcist” is teamed up with Rungano Nyoni’s 2017 effort “I Am Not a Witch,” a tale based on true events revolving around a Zambian girl accused of channeling the occult.

Also on the docket is Chantal Akerman’s 1975 rare classic “Jeanne Dielman, 23 Commerce Quay, 1080 Brussels,” starring the grossly underappreciated Delphine Seyrig as a mother supporting herself and her son by taking gentlemen callers in their flat. Given the illicit nature of the occupation plied in “Jeanne Dielman,” it makes a perfect pairing (on Wednesday) with Luis Buñuel’s alluring, surreal contemplation about a bored housewife (Catherine Deneuve) who for enigmatic reasons (definitely not lack of money) also receives pay for pleasure in “Belle de Jour.” The 1967 film recently circulated the art house circuit as part of its 50th anniversary commemoration. Both films stand the test of time effortlessly, and a cinematic playbill that features Seyrig and Deneuve is hard to beat.

Also playing with “Lolita” and “The Holy Girl” is Marielle Heller’s “Diary of a Teenage Girl” (2015), telling the ordeal of a teenage girl (Bel Powley, simply sublime) in 1970s San Francisco having an affair with her mother’s boyfriend (Kristin Wiig and Andrew Skarsgård, both fantastic as well). Heller won the Boston Society of Film Critics’ Best New Filmmaker Award and is a directorial talent to watch. Upcoming in 2018, Heller helms a film about celebrity biographer Lee Israel, “Can You Ever Forgive Me?” starring Melissa McCarthy, and has a project in development about the same-sex marriage bill in California.