‘Ocean’s 8’: Crew of women execute the job, but brains behind the camera can’t con us 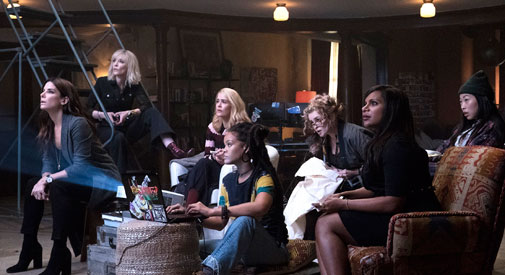 ‘Ocean’s 8’: Crew of women execute the job, but brains behind the camera can’t con us

The narrative around the Sandra Bullock-led “Ocean’s 8” has been about its “gender swap” element – which can be scrutinized and celebrated, but shouldn’t dominate conversation surrounding a heist flick that is stylish, fun and fleeting. Separated from the faux controversy, its success rests largely on the  the leading ladies’ delectable camaraderie, off-kilter and eye-catching performances and lavish production. 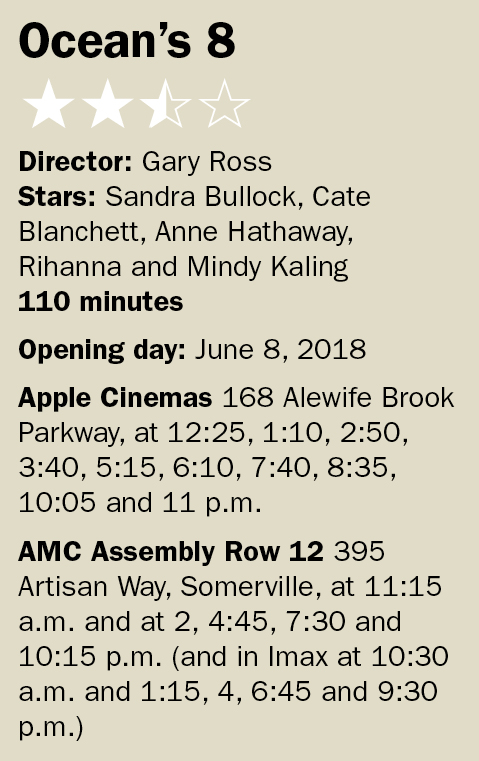 On release after five years in prison following a set-up by an ex-boyfriend, Debbie Ocean (Bullock) is ready to once again dive headfirst into crime with a masterful plan to rip off deceptively airy starlet Daphne (Anne Hathaway – having a blast) at the Met Gala. The rest of her ragtag team includes Cate Blanchett, Rihanna, Helena Bonham Carter, Sarah Paulson, Awkwafina and Cambridge’s Mindy Kaling. Every woman has a part to play to execute Debbie’s plan.

“Ocean’s 8,” directed by Gary Ross (“Pleasantville,” “The Hunger Games”), is nothing without its impeccable costuming, which encapsulates perfectly a sense of femininity the film is determined to celebrate and deconstruct. Debbie uses makeup as armor against a world in which she hides, while Daphne is forced to be a fawning princess playing dress-up. Blanchett’s Lou sports clothing only she could wear; in theory the tailored suit cuts are stereotypically masculine, but Blanchett uses them to reinforce her androgynous, screen-shattering appeal. From her outfits to the genre to the namesake of their film, they’re taking male-dominated areas of entertainment, fashion and pop culture and giving them new life.

Ross is ill-equipped to tackle a central set piece as showy and glittering as the Met Gala, though; he shoots with a stagnant and dull eye. There is no passion behind the camera, and the actresses and naturally opulent scenery are relied on to fill the void. The script, penned by Ross and Olivia Milch, is similarly didactic and vacant. The characters exist solely with the performers, who add enough flavor and depth to their delivery and shared chemistry to make them a group worth rooting for. The stakes were never going to be particularly high, but if the script had added a touch more tension between the characters or some dimension beyond the heist itself (maybe even real motivation, aside from simple curiosity) the film might’ve risen to be more than just a fun time.

A fun time it is, however, with the cast almost uniformly game. The only low point is Bonham Carter – bless her, she is so tied to the bulging-eyed Tim Burton aesthetic that she remains cartoonishly broad no matter the role. The standouts, barring the effortlessly cool Blanchett and Rihanna, are Hathaway and Awkwafina, both eliciting some of the greatest laughs. Hathaway uses a comedic edge and self-awareness unseen since early in her career to add texture to a performer we thought we knew (and she’s completely unfazed by physical comedy). Awkwafina is a newfound delight – to be seen this summer in “Crazy Rich Asians” – with an off-kilter approach to her delivery physically and verbally that comes off as effortlessly eccentric.

There are more memorable parts to the whole than in the original “Ocean’s Eleven,” in which Don Cheadle’s bad Cockney accent and Brad Pitt’s charms were what stood out in a film made for pizazz rather than character.

There’s a moment when Bullock’s Debbie dismisses the idea of men joining in the heist, citing the fact that in everyday life men get noticed, while women are overlooked. It’s a theme that resonates throughout, as women are dismissed continually and taken for granted – particularly Hathaway’s Daphne – due to past perception. “Ocean’s 8” lacks soul at times, and feels less like a cohesive film that a lot of truly great ideas, but the women at the center – the characters and actresses – are fascinating in how they break barriers. It’s imperfect but delightful, troubling yet winsome, and an absolute blast to watch in a theater no matter the implications of an industry so incapable of creating original content or opportunities for its female talent. “Ocean’s 8” is about women taking control of their own narratives, no matter how that manifests itself, and studios should take heed of the talent on board and what they can do.