‘Trois Couleurs’: Kieślowski vied for an Oscar with intertwined tales of Blue, White and Red 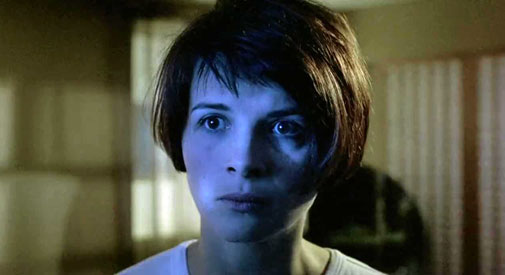 ‘Trois Couleurs’: Kieślowski vied for an Oscar with intertwined tales of Blue, White and Red

With France a lock in the World Cup final this weekend, it’s somewhat coincidental, if not fortuitous, that the Brattle Theatre plays Krzysztof Kieślowski’s “Trois Couleurs” Trilogy this weekend, beginning Friday and concluding Sunday as the French soccer team goes for the brass ring. If the connection between futbol and film eludes you, the three colors, “Blue,” “White” and “Red” – while patriotic to our American mindset – are not in Fourth of July order, but that of the French flag, symbolizing liberty, equality and fraternity. 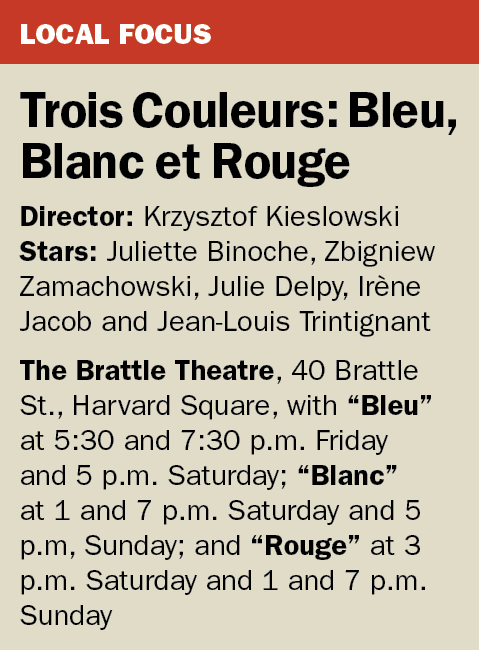 Kieślowski, Polish by descent, made most of his critically acclaimed films in France – “The Double Life of Veronique” (1991) and the aforementioned trilogy (1993-94) – though earlier works in Poland such as “A Short Film About Killing” and “A Short Film About Love” (1988) and his 10-part “Dekalog” (1989) TV series, in which each segment represents a different one of the Ten Commandments – remain little-seen yet riveting explorations of crime, punishment and morality.

The Couleurs trilogy lands at the Brattle to celebrate the 25th anniversary of “Blue” (1993), the first in the series, about a recent widow (the indomitable Juliet Binoche, then hot off “Damage” and “Wuthering Heights”) who takes on an eager lover and decides to drop out of familiar circles, only to run into her husband’s lover. The second film in the moodily affecting series, “White” (1994), revolves around a disenfranchised Polish immigrant (Zbigniew Zamachowski) by the name Karol Karol (a Pole immigrant with the initials KK? Hmmmm) seeking satisfaction from the French beauty (Julie Delpy) who so unceremoniously divorced him. It doesn’t help that their sex life consisted of one coupling, or that his grand scheme becomes to stow away in a suitcase on an airplane. One of the series’ great teases is that Delpy and Zamachowski leave a small footprint in “Blue,” and Binoche returns the favor here. They all make a show in “Red” (also 1994), the final and most profound chapter about a model (Irène Jacob, so sublime in “Veronique”) who comes into chance contact with a reclusive judge (French screen legend Jean-Louis Trintignant) after striking his dog with her car. All three films are built on an ethereal web of fate and circumstance driven by personal distress, with beacons of hope looming from various points on the horizon. There’s something distinctly tragic, romantic and deeply moving to them all, and after “Red” the director, who would be nominated for an Oscar for the foreign language effort – a rare recognition – said it would be his last film. Whether fateful or tragic, it would prove absolutely true: Kieślowski would die in 1996.

The Brattle shows all three of Kieślowski’s magnificent colors on 35mm prints. Be there or be blue.