EMF Building, once for industry, then the arts, will get a historical landmarking study by city 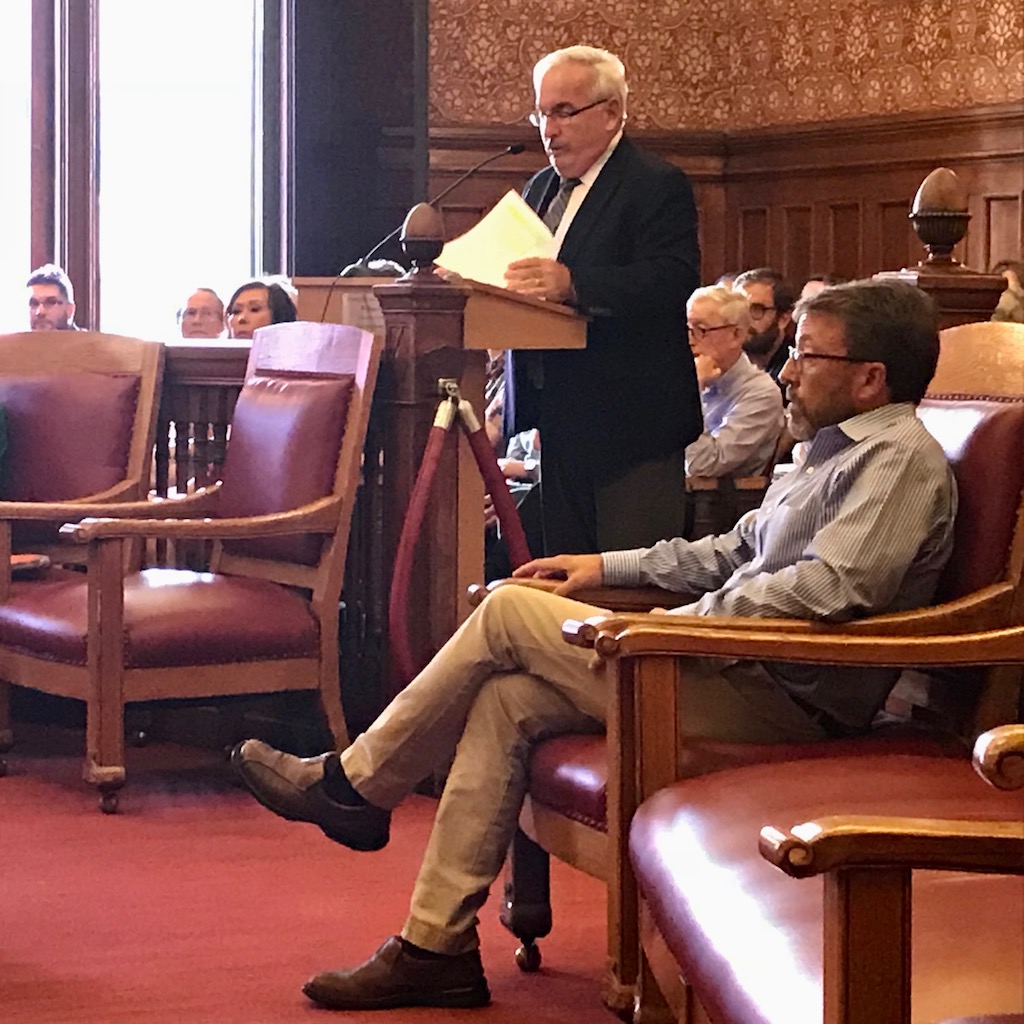 EMF Building, once for industry, then the arts, will get a historical landmarking study by city

Attorney James Rafferty prepares a presentation to the Historical Commission on Thursday on behalf of client John DiGiovanni, seated. He plans to redevelop the EMF Building on Brookline Street near Central Square. (Photo: Marc Levy)

Developer John DiGiovanni looked “stunned” upon hearing Thursday that his EMF Building would undergo a landmarking study up of up to a year, said people at the Historical Commission meeting deciding the issue.

Among commissioners, only chairman Bruce Irving voted against a landmarking study after a motion for one was made by member Jo Solet. While member William Barry Jr. expressed skepticism about the outcome but deemed the effort worthy, alternate member Gavin Kleespies seemed more enthusiastic: He called the building a symbol of the city’s counterculture and suggested that the artists who proposed the landmarking might participate in the study.

A finding that the Brookline Street building near Central Square is a landmark wouldn’t stop DiGiovanni from turning it into office space after more than a decade housing 60 rehearsal spaces, three professional recording studios and three visual arts studios, which he shut down in the spring with the eviction of more than 200 artists and musicians. A landmarking would force him to keep the exterior intact without commission approval for changes, and the potentially yearlong study period – though possibly taking only into the spring – could affect his stated plans for a roughly $4 million gut rehab and reconstruction, depending how much he hoped to change its industrial feel and small windows.

James Rafferty, the attorney for DiGiovanni and his Ledgemoor company, noted a staff memo to the commission that “recognizes the limited architectural significance of the building,” a 23,554-square-foot, three-story brick structure that as far back as 1921 housed a company that made electrical parts and sold consumer goods such as radios. 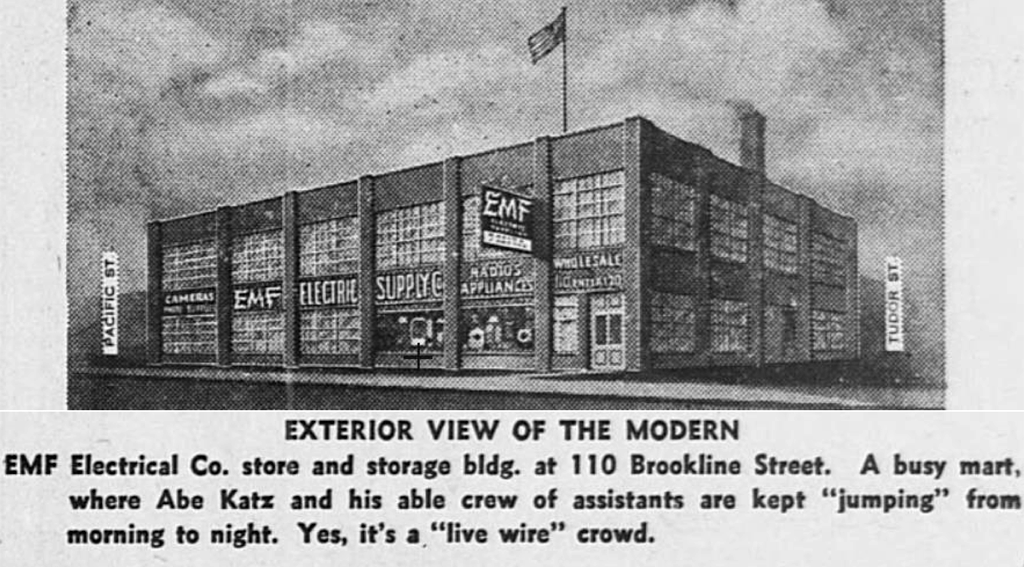 A Historical Commission presentation on the EMF Building seen Thursday included a 1947 clipping from the Cambridge Sentinel.

Architectural significance wasn’t the hook on which the landmarking request hung, though. In a presentation given by former EMF tenant Jon Glancy, the request addressed how “the interplay of industry and culture can be traced throughout the history” of the building, and how its innovations such as radio and camera technology came to be used “as means of artistic expression.” The artists did find it important how the building’s industrial features lent themselves to its most recent use: “The building’s thick walls and limited doors and windows played a critical role in allowing musicians to create their work only steps from houses without disturbing neighbors.”

Nationally known performers that have recorded in the building include Arctic Monkeys, Bearstronaut, Juliana Hatfield, The Lemonheads, Letters to Cleo, The Melvins, Scorpion and Peter Wolf, according to the artists’ presentation.

“All the technological innovations that we’re seeing in Cambridge today, which predominantly issue from white-collar workspaces, never would have been possible without the pioneering work of blue-collar workers in electrical manufacture facilities like EMF. Furthermore, innovation itself relies upon freeform creative community spaces that allow experimentation to take place,” said filmmaker Steve Onderick, one of the driving forces behind the landmarking request.

The idea of Cambridge’s industry turning from the manufacturing of goods to the making of music seemed to intrigue the commission, though Rafferty noted that neither the thickness of walls nor interior elements would be affected by a landmarking.

“It admittedly has cultural significance,” Rafferty said, but the building already falls under the demolition delay ordinance that would bring a study if DiGiovanni sought to tear it down, and “the owner has no intention of demolishing the building.”

In fact, the grandfathered size of the building – if it were torn down, laws might allow for a replacement of only half its size – is “one of the most significant preservation tools,” Rafferty said. “This building will be preserved as a matter of practicality.”

While the significance and fate of a mural covering much of the building’s north side was a puzzle to the commission’s executive director, Charlie Sullivan, his staff recommendations called the orange and blue “EMF” signs visible from Brookline Street the building’s “most distinctive features.” The body typically has no say over paint, but in this case he identified the images an “important character-giving features of the building  [that] we’d certainly have an interest in protecting.” Rafferty said his client had talked about “a willingness to perhaps incorporate” the sign into his new concept for the structure. “It’s certainly something the property owner has expressed a willingness to explore doing.”

After Rafferty wrapped up, urging the commission to reject the landmarking study, his references to DiGiovanni’s “willingness to perhaps … explore” drew a dubious reaction during public comment.

“Why would we not preserve the building just because he says ‘I don’t think I’m going to change it?’” the speaker asked.

State Rep. Mike Connolly called the commission’s decision “good news” applied to a local “real estate speculator,” though DiGiovanni is better known for his Trinity Property Management company and as president of the board of the Harvard Square Business Association. Suzanne Preston Blier, a Harvard architectural historian who helped the former EMF tenants write the request for a landmarking study, called the decision “really stunning.”

“Sullivan and the commission clearly put a great deal of care into doing some preliminary research,” Onderick said. “We owe the Historical Commission a lot of credit for having the vision to see the value in this and the courage to stand up for the preservation of Cambridge’s history in the face of developers who’d see it erased in the name of amassing more wealth and power.”

This post was updated Aug. 13, 2018, to clarify that a landmarking study may take as long as a year, but might be shorter.