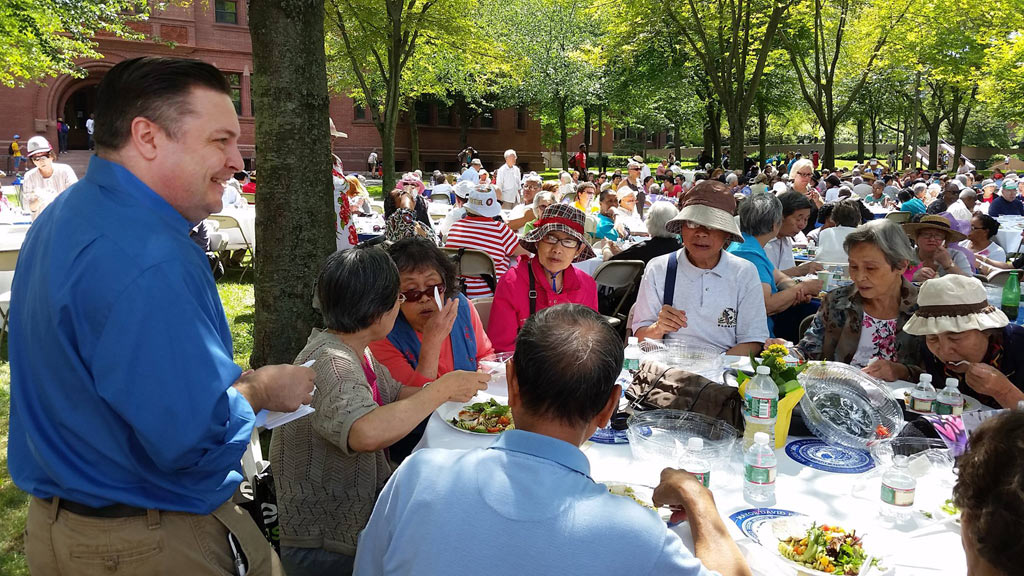 Weather was perfect for the 2015 Mayor’s Office senior picnic in Harvard Yard – attended by then city councillor Marc McGovern, now the mayor exploring a relocation. (Photo: Marc McGovern via Facebook)

Expecting thunderstorms and temperatures in the 80s, the Mayor’s Office canceled its Senior Luncheon expected to be held Aug. 1 in Harvard Yard – the second time in four years that the outdoor annual event has been called off by summer weather and some 1,100 seniors have missed an outing.

Now the city is looking at ways to guarantee the event can take place as regularly as the counterpart spring senior luncheon held indoors in Massachusetts Institute of Technology facilities.

“It would be nice if we could have predictability,” said councillor E. Denise Simmons, who was mayor when the 2016 event had to be canceled and filed the order heard Monday asking that the city and Harvard explore adding rain dates or, better yet, finding a location seniors can navigate better and in more comfort. (The yard offer mobility challenges for some seniors, and toilet facilities tend to be an inconvenient distance away, Simmons said.)

In fact, conversations about changing the site of the summer event began almost instantly after this year’s cancellation, Mayor Marc McGovern said: “Even the day of, we were meeting and talking with Harvard exactly about this.”

With several follow-up meetings complete, McGovern said he was “pretty confident” an indoor location would be found for upcoming years and announced soon.

One possibility is across the river in the Harvard athletic facilities, “which isn’t Cambridge, but we bus folks,” McGovern said. Holding the meal at Cambridge Rindge and Latin high school or at the city’s Falcon Field House at Russel Field near Alewife were other possibilities – with Harvard continuing to cater, though it wouldn’t then be hosting.