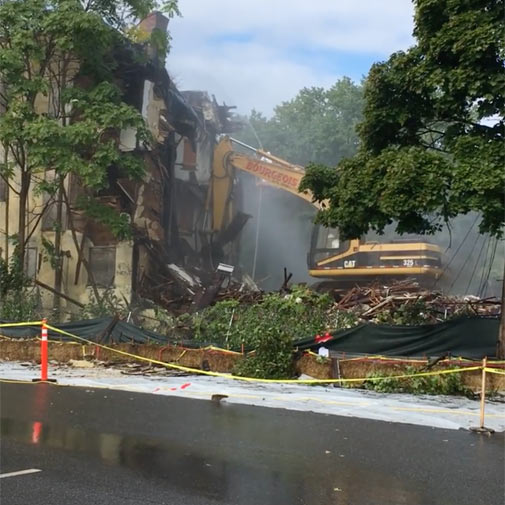 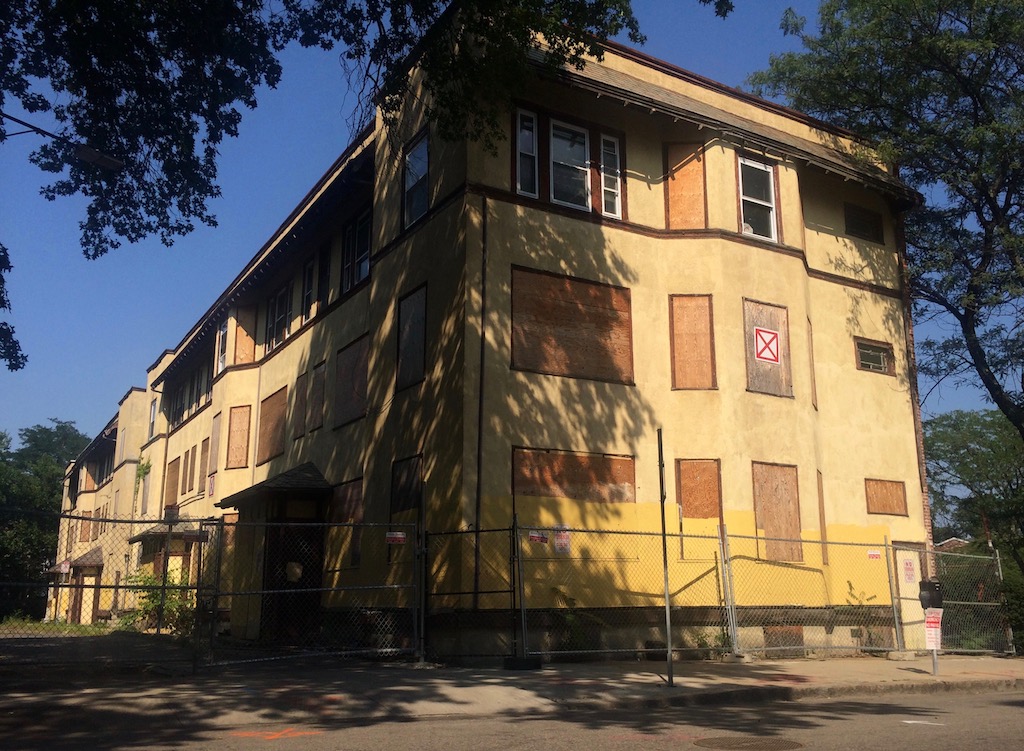 Vail Court, on Bishop Allen Drive near Central Square, was prepped for demolition in summer of 2017 – but demolitiomn only began Tuesday. (Photo: Marc Levy)

Demolition of Vail Court began Tuesday, with the abatement and teardown of the boarded-up, rat-infested buildings near Central Square expected to take about two weeks.

Destruction of the buildings was going fast: As of Wednesday, the rear building was already down and being loaded up into trucks, with the second building to follow next week before foundations were removed, said the city’s manager for the project, John Logiudice.

When the site is cleared, before being able to build its planned affordable, senior or transitional housing the city will still have to resolve litigation with the Abuzahra family, which once owned the property. The city acquired the 139 Bishop Allen Drive property in September 2016 through an eminent domain land taking that saw the family given $3.7 million in exchange.

The land taking was the result of inactivity on the degrading site: the family had spent the better part of a decade in court squabbling over ownership and eventual development rights. But expectations that action on the site would begin as soon as August 2017 were snatched away when the family filed litigation, starting with a temporary restraining order against demolition.

Now the demolition itself may challenge the neighborhood. The city is suggesting that people who live nearby close their windows during construction activity to minimize noise, and rats fleeing the site are another concern. “The city’s Inspectional Services Department has been closely monitoring rodent activity in the area and has taken all necessary control measures to limit activity during the demolition process,” the city said online, offering a contact to report rodent issues: Dave Power at (617) 349-6119.

Minka vanBeuzekom, a real estate agent and 2012-13 city councillor, was watching – and recording video (above) – as the three-story Vail Court structures began tumbling, having been alerted by neighbors who remembered her time as a citizen activist on the old Area IV Neighborhood Coalition.

“I’ve been waiting for this day since 2006, when there was a huge rodent problem and I was called in,” vanBeuzekom said, explaining that she’d “been following the saga ever since.”

The waste from the demolition will go to landfills in New Hampshire and Maine that can accept contaminated materials such as the asbestos-laden remains of Vail Court, Logiudice said.

After demolition, the area will be back filled with crushed stone, the city said, to await resolution of the court case that’s slowing construction of affordable, senior and transitional housing housing.

The city once hoped construction would begin this fall, but based on a presentation given in July 2017 to the Affordable Housing Trust, the schedule is off by as much as 14 months.