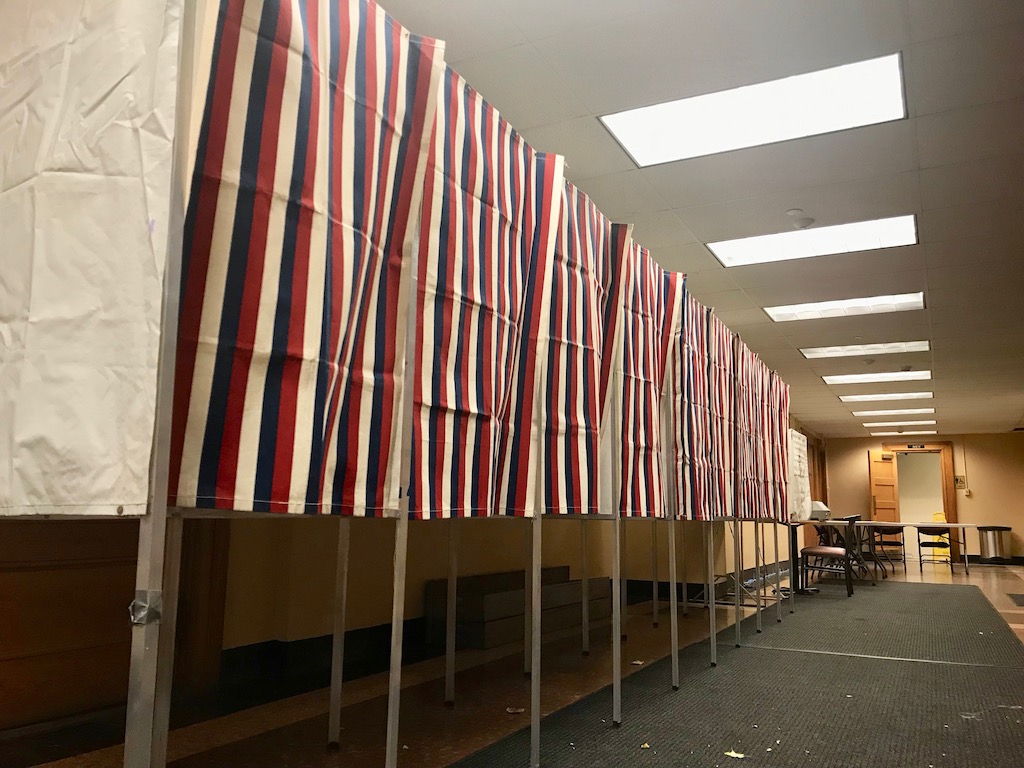 Voting booths are set up and ready for action Monday at Cambridge City Hall, where Tuesday saw a stream of residents contributing to 64 percent turnout citywide. (Photo: Marc Levy)

In Somerville, preliminary results were available at 9:32 p.m. Tuesday, while Cambridge’s Election Commission released preliminary results at 1:52 a.m. Wednesday. Using those results – lacking write-ins, hard to read ballots and oversea and other  absentee ballots – and figures from New York Times reporting of 97 percent of votes tallied statewide, it is possible to get a sense of how the cities voted compared with each other and voters from across Massachusetts.

In candidate races, incumbents are marked with an asterisk. Elections in which there was no challenger are not shown here.

When it came to statewide ballot questions, Cambridge voters were significantly more interested in limiting how many patients could be assigned to each registered nurse (but the question failed to pass); far more energetic in seeking a citizens commission to undo the Supreme Court finding called Citizens United, which gives corporations the same Constitutional rights as human beings to make campaign contributions (a measure that passed statewide); and even more supportive of retaining protections for trans people in public places (another win statewide).

When it came to electing a governor, Cantabrigians were strongly in favor of unseating Republican Charlie Baker in favor of Democrat Jay Gonzalez. But statewide, Gonzalez got only around a third of the vote, the opposite of how Cambridge voted.

Cambridge also showed U.S. Sen. Elizabeth Warren more love than Somerville or voters statewide – but she’s a member of the home team for us. U.S. Rep. Katherine Clark was also returned to office easily over Republican John Hugo. Of the 33,973 residents of Cambridge able to cast a ballot in this race, she captured more than 60 percent of the vote.