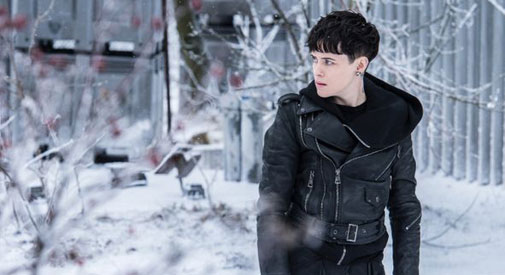 As in “The Girl with the Dragon Tattoo” (either version), female revenge fantasies reign in “The Girl in the Spider’s Web” as hacker/punker/private investigator-cum-vigilante Lisbeth Salander (Clair Foy, “The Crown” and “First Man”) takes down rich abusive husbands (emptying out their bank accounts, giving the spoils to the abused and sending that video of the miscreant shagging the boss’ wife to said employer), deals with even deeper daddy and family issues than previous cinematic installments and, well, pretty much saves the world James Bond-style. Yeah, it’s a hive (nay, a web) of activity and a lot is asked of Foy, who’s not given much of a skin to fill — though she’s every bit as fierce and feral as Noomi Rapace and Rooney Mara were in earlier incarnations. 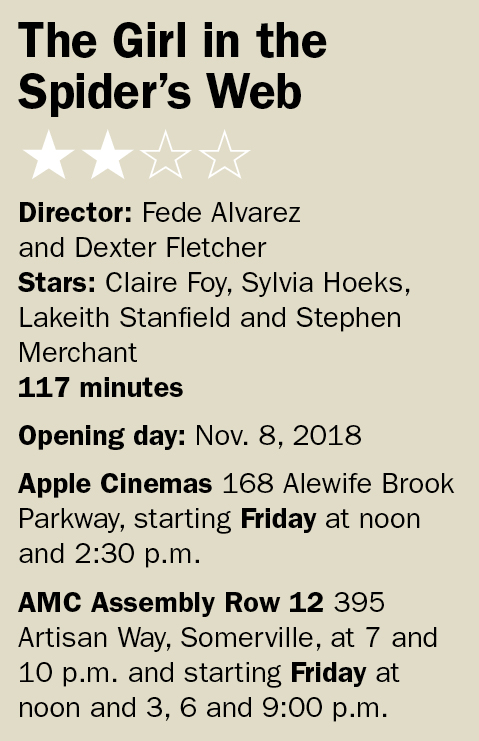 The story, adapted from the first posthumous adaptation of Stieg Larsson’s “Millennium” trilogy by novelist David Lagercrantz (thus the “A New Dragon Tattoo Story” tag you may see), centers around a rogue black market mob called the Spiders that possesses a encryption program called Firefall granting it the keys to every nuke around the globe. They’ve hijacked the master switch from Lisbeth after she, at the behest of its creator, a conflicted NSA agent (Stephen Merchant), hacks it away from the NSA to destroy it. To get the keys to the doomsday device, there are big chases, cloistered struggles and improbable getaways – Swedish cops make the Keystones look adroit – and the baddies are all fetching statuesque blondes, namely Sylvia Hoeks, so cold and steely as the relentless replicant in “Blade Runner 2049” and more of the same here.

Lisbeth has to handle a package – the savant son of said NSA genius (Christopher Convery), who is the key to Firefall going live. In all the crash-bang Bond-esque thrills, the nuance and dark gothic brooding that made the Swedish series and the American remake by David Fincher so compelling never gets switched on here. Foy looks the part, but her Lisbeth is nearly as cold and aloof as Hoeks’ sadistic stalker in red. (The smackdown-in-stilettos thing, which worked for Charlize Theron in “Atomic Blonde,” does not work here.) Plus, Lisbeth’s skills are so top-notch and she’s so well known, how is it Google or Amazon haven’t hired her away? I mean this “girl” is sharp and resourceful in a way that would make McGyver look inept. She’s able to hack an airport security system with a cache of dildos, and while driving a car she uses her iPhone to take control of the vehicle she’s pursuing – while careening across a bridge at a breakneck speed in a snowstorm.

Even when it winds back to the big family estate in the cold icy hinterlands, made so iconic and visually alluring by Fincher in 2009, the film’s still all about high-tech oneupmanship and soft-core, bind-torture shenanigans. Lakeith Stanfield, so good in “Sorry to Bother You,” drops in as the U.S. agent out to recover Firefall. His Needham allegedly is one of the greatest hackers of all time, yet we never see him at a keyboard, just behind the trigger of a very big gun. The script by Steven Knight (“Locke”), Jay Basu and director Fede Alvarez tries to strap too much in. It’s sleek but overloaded. As built, this web’s a fun, passing fancy too emotionally inert to snag anything worth caring about.