Sessions begin on equity, power and privilege with a leader who’s encountered bias in city 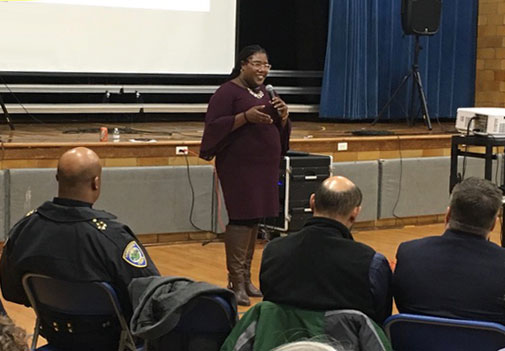 Sessions begin on equity, power and privilege with a leader who’s encountered bias in city

Twenty-four hours after a School Committee roundtable on racism at the high school – depicted by the school’s Black Student Union last year in videos sharing painful experiences inflicted by some staff and students – a large audience turned out for the first in a Cambridge Digs Deep series of a “community conversation on race, equity, power and privilege,” as city councillor Sumbul Siddiqui put it.

“Listening to the students last night at the School Committee meeting was heartbreaking,” said Mayor Marc McGovern, who initiated the series with Siddiqui. “Racism is not just something that happens somewhere else. We must confront some difficult and unpleasant things about our community and ourselves.”

“The roots of race and class inequities are deep and imbedded in our systems. They are resistant to change,” said Siddiqui, echoing some of the previous evening’s comments from committee members Manikka Bowman and Laurance Kimbrough. “I hope that in addition to all the talking our community does do, we have an action plan.”

For the rest of the evening, the floor was held by the charismatic Darnisa Amante, founder and head of the Disruptive Equity Education Project, an organization that specializes in building community and breaking down barriers based on stereotypes and preconceptions.

Amante has been working with Cambridge Public Schools for more than 18 months, and has been part of some of the meetings between administration and BSU students.

In this first session, titled “Building Understanding on Differing Perspectives,” Amante opened with anecdotes about her first years in Cambridge as a Harvard student, such as about the taxi driver who told her she “must have got the address wrong” when going home, and that she meant Dorchester or Quincy. “Walking around as a Harvard student, people would ask me if I was lost,” she said.

“Somewhere along the way,” she said, “I really fell in love with Cambridge, but it really made me sad that something I loved so much didn’t want me. I know I am not an anomaly. This is also true for people not of color. My way of giving back to this city is pushing it with love.”

“We all have biases,” she said.

Having caught people’s attention, she turned to what she called “direct instruction,” including laying out the vocabulary and rules of conduct for talking about race with people of all backgrounds. Using slides (the presentation and her notes are promised to be available online this week) and talking extemporaneously, Amante began with Deep’s framework for “moving through equity work.”

One example was her separate definitions of “diversity,” “inclusion” and “equity,” which she says also illustrates the difference between “liberal” and “progressive.” 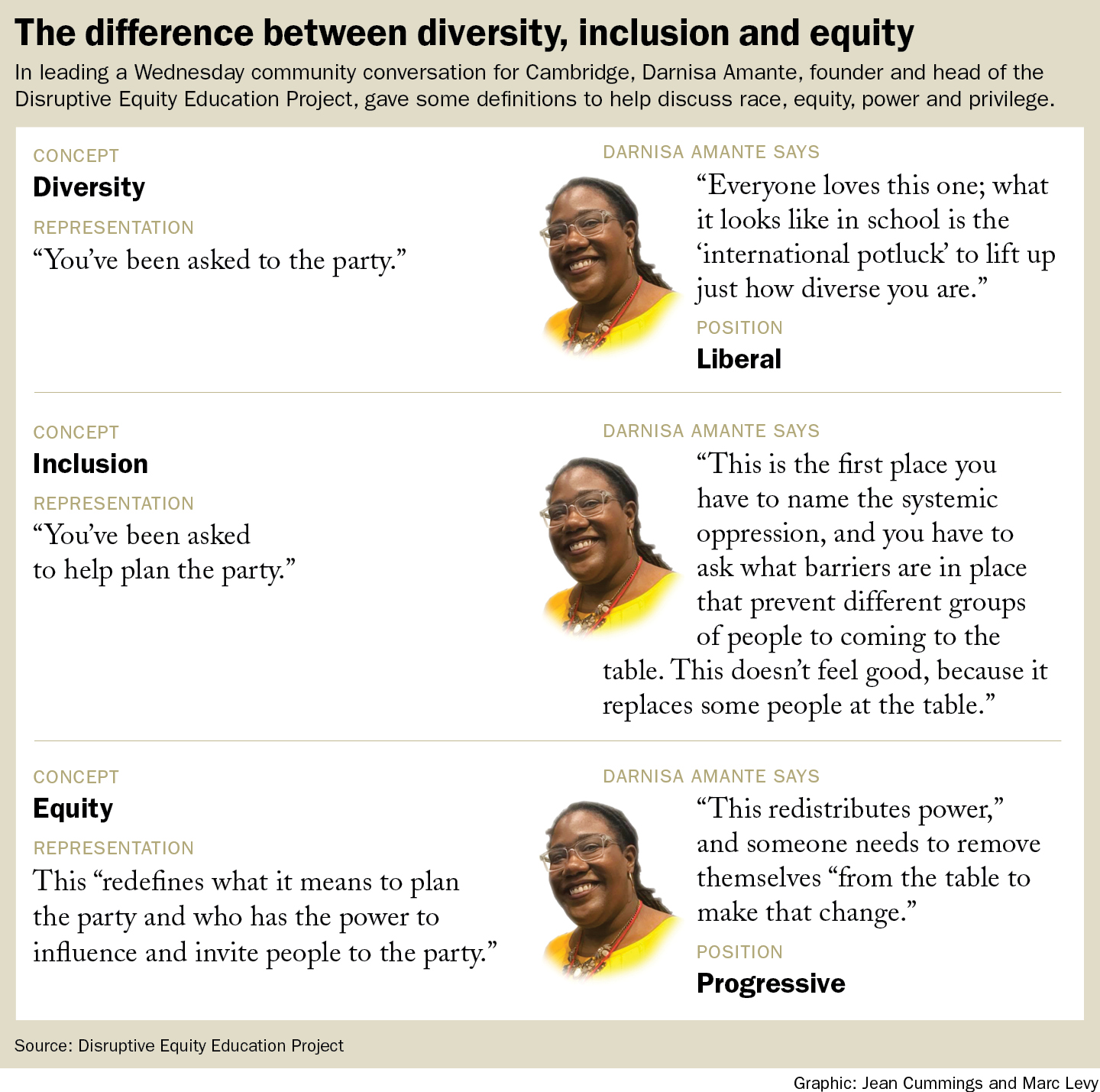 Twice Amante asked audience members to break into small groups to discuss a question or two, considering its application to themselves or to the city as a whole. Groups were encouraged to report summaries, and individuals were asked to suggest ideas and topics for future sessions on Post-it notes.

The next sessions, with all locations to be announced, will be:

Feb. 7 from 6 to 8 p.m., presented by the city and Cambridge Public Schools