After repeated examples of racism at school, impatience rises over lack of apparent action 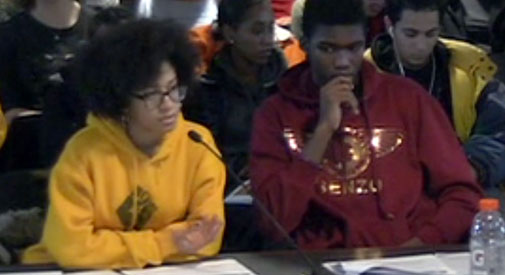 After repeated examples of racism at school, impatience rises over lack of apparent action

Cambridge Rindge and Latin School students Jessica Paul, Benjamin Attles, Renam Zeroual and Casey Torrez, seen in screen captures from video, give testimony at a Tuesday meeting of the School Committee about race.

This was a notable week for Cambridge “conversations” on race, with two significant events held on succeeding nights.

Wednesday saw the first of five sessions of “Cambridge Digs Deep,” a “citywide conversation on race, diversity and equity.”

The night before, the School Committee held a public roundtable of “conversations with students,” particularly members of the high school’s Black Student Union that last year began revealing to the public through videos the racial microaggressions and other issues they’ve encountered from some students and staff – a major impetus for the Digs Deep sessions. The committee room had a good turnout, with several Cambridge Public School staff and parents of all races in the room.

Though Cambridge Digs Deep is just starting, the roundtable message from the students and faculty adviser of the Union was that they are “done” having conversations. “We’ve talked about it. We are talking about it. We’ve done point A. What’s next?” adviser Kevin Dua said. “If you are looking for a green light, just go.”

Although it took quite a while until students were ready or willing to talk, when they did they had a lot to say. Most seemed to suggest that as long as teachers who say racist things to students remain in the classroom, there is no evidence of progress.

“I’ve heard it so many times, we need to hear ‘the kids’ voice,” Cambridge Rindge and Latin School senior Casey Torrez said late in the meeting, “but when we voice our opinions, nothing happens. I want to believe you, but we hear, ‘We are going to look into it,’ and the next thing you know the same teacher is back in the class. Nothing happened.”

At Tuesday’s roundtable, where committee and administration officials used the word “conversation” nearly 20 times, there was almost no actual dialogue. After opening comments from Mayor Marc McGovern, committee member Manikka Bowman (who asked to chair the event) and Superintendent Kenneth Salim, the mic was turned over to Dua, who for 13 minutes gave the history of his “reading a Cambridge Day article that made me want to come” to Cambridge schools, the revival of the Black Student Union and the creation and responses to its videos. Much of this history is documented, but Dua also reported that a BSU sign on his door has been defaced and that a banner advertising a group-sponsored “Cultural Night” last spring was destroyed twice, which led to the group canceling the event. He ended by listing some comments he and students were subjected to, including a white teacher calling him an “N-word” – Dua used the full term, twice – and others chiding students in the group for being “militant.”

Bowman asked if students wanted to speak. After some moments of expectant silence, no students acted and Bowman turned to Salim, deputy assistant superintendent Carolyn Turk and high school Principal Damon Smith for a half-hour of presentations on work undertaken to address student concerns. They admitted these included several initiatives that predated BSU activity – such as the “leveling” of certain classes for first-year students to combine “honors” and the lower-level “college prep”; providing Chromebooks to all high school students; and the goal of “equity and access” as one of the three-year District Plan’s five strategic objectives.

Turk’s presentation on a Microaggressions Working Group was most directly pertinent. Created through a December 2017 committee motion in direct response to the union’s “Minority Reports Vol. 1” video, the group has met seven times with a membership of of CRLS students, Cambridge Public Schools educators, community partners, caregivers and one School Committee representative. They have identified five “action steps and tools”: generate recommendations on policies and procedures; increase diversity among teachers; focus on relationship-building; improve “cultural and identity work”; and ensure clear and well-known guidelines for “reporting microaggressions.”

When the adults finished their presentations, the students wanted to talk.

“I think we know we can talk,” student Renam Zeroual said. “But it feels like all we’ve been doing is talking. It’s very repetitive.” Then she and four other students let it out for nearly a half-hour. “I think that the Cambridge district is clearly racist,” Zeroual said to finger-snapping approval by many students, reporting what she’d taken from attending four of the working group meetings, where “I’ve heard a lot of good things come out. But when we talk about bad things it’s [called] ‘challenging’ or ‘low moments’ rather than acknowledging them and apologizing. it’s important to recognize who was in the wrong and why.”

“My first day here, I heard a racist comment from a teacher,” said Benjamin Attles, now in his third year. “I’ve seen change here … but we’ve got to focus on some of the teachers that have been here. Even with all of our volumes, there are still [racist] comments. If they feel that, why are they with kids? This school is diverse. We all know that. So why do we put in teachers who don’t like diversity?”

“I have a problem with the terminology,” Natisa Farah said. “It’s racism. ‘Microaggression’ is the minimizing term. Throw it in the trash. It’s not helpful to forming a solution.”

Jessica Paul said that as a non-Cambridge resident she felt fortunate to attend the Rindge School of Technical Arts, but she feels a “lot more comfortable being myself in Everett. In this school, oftentimes black students have to code switch to fit in,” she said. “It’s going to be hard for some students to act the way that teachers want us to … and a lot of times it’s because they don’t understand their students.”

“We still have a system”

The one moment resembling a conversation came as Bowman acknowledged the students’ frustrations and “hurt and pain,” especially at dealing with limitations to fast action. “This is not about us individuals, it is about a system. The point of this is, what can we do to change the system? We can talk and talk or remove individuals, but we still have a system. It is not sexy. It is easier to have a conversation about the N-word than to pull back the layers a bit to figure out what are the [systemic] things that make us behave the way we behave that allow us to perpetuate the behavior.”

School Committee member Laurance Kimbrough, in brief comments, also stressed institutional racism. “The racism here is what got to me,” leading him to leave his career in Cambridge Public Schools after growing up in it, he said, but he “just recently firmly [came to] say that our system is actually doing what it is intended to do: Create a system of haves and have-nots. It’s not broken – it’s intended to create inequity. To continue doing what we’ve done and thinking we will get difference results is actually the definition of insanity.”

Bowman also tried to explain the difficulties of removing a staff member, alluding to but not naming union contracts that help protect staff from arbitrary dismissal by creating layers of required action.

McGovern talked about the difficulty of explaining long-term “higher level” work to parents and students who want immediate results and noting that “it’s the law that we can’t share some things [that we have done].” But just getting rid of a given teacher doesn’t solve the problem: It’s the “silent racism,” he said, not the blatant form, “that is the worst part” and hardest to change.

Committee member Emily Dexter’s comments were also brief. “It sounds like there is a lot of pressure on the BSU and Mr. Dua, and I feel very bad about that – because this is a big topic that is all of our responsibility. One place we might want to focus on this year [is the] reporting process.” She ended by turning to the union and Dua: “I don’t think it’s your responsibility to eliminate racism in our schools.”