‘Ben Is Back’: This addict son’s homecoming takes bad turns from family drama to thriller 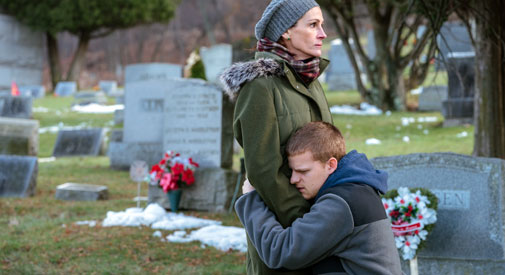 ‘Ben Is Back’: This addict son’s homecoming takes bad turns from family drama to thriller

It’s a family affair as dad Peter Hedges directs son Lucas Hedges in “Ben Is Back,” an edgy if overwrought melodrama about a family caught in the crosshairs of addiction. Similar material was explored this year in “Beautiful Boy,” a based-on-real-life yarn that worked inner sentiments with solid fervor but somehow failed to kick it over the moon. 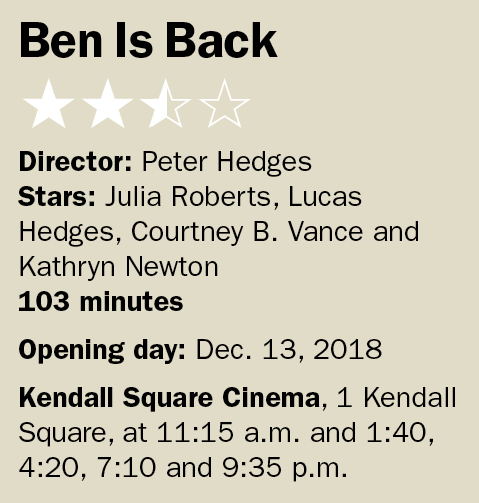 The result’s about the same here, but the film moves in very different strokes. For one, “Ben Is Back” is much grittier and edgier in texture and context. The addicted son, Ben (Lucas Hedges, nominated for an Oscar for a “Manchester by the Sea”) makes a surprise return home from rehab as Christmas nears and becomes an immediate source of tension between his mother (Julia Roberts) and stepfather (Courtney B. Vance). His presence is a clear code red. Sure, they’re fearful Ben will use again – but there seems to be something more. Holly (Roberts) puts down some hard rules and Neal (Vance) agrees reluctantly. There are other kids in the house whose welfare is at stake: Ben’s sister Ivy (Kathryn Newton) and Neal’s two children from a prior union. It’s something of a “Brady Bunch,” but there’s no laugh track and nothing funny in what’s to come.

Holly and Neal’s concerns seem a bit over the top initially. Holly won’t let Ben go to the bathroom or try on a shirt in a retail store without her constant supervision. After a group meeting you realize why: Ben’s not only at risk to use again (“all addicts lie,” he forewarns Holly), but was an active dealer in the upstate New York hamlet that’s a harried mix of sugar plum nice and badass vice – the tentacles of which threaten to drag him back in. Neal and Holly’s quaint homestead is soon burglarized, the dog’s gone missing and unsavory sorts start to lurk out from the dark shadows of Main Street. A wonderful life this is not.

By the third act the film shifts into thriller mode – something of a tough-love saga by way of “Breaking Bad.” It’s too bad, too, because the homestead dynamic between the father who bought into this little shop of horrors and the protective mother caught in conflict gets lost. The film comes out of the gate wobbly, and just when it find its feet and we begin to get invested, Hedges the writer and director takes one mean street turn after the next. Only the first few might be plausible.

The fraught chemistry between Roberts, Hedges and Vance sells much of it for a while – the whole ensemble is quite convincing – but what they’re given to work with is palpable, unbridled anger without ownership or remorse. As Holly sees it, her family’s troubles are tied to one person, and when she gets her moment of confrontation, it’s ugly, with little upside. Addiction’s no doubt nasty and impactful beyond the veins of the person using, but bleak tales close to the edge don’t necessarily need to go over it. Sometimes family affairs need to just be more intimate.