‘Spider-Man: Into the Spider-Verse’: One bite and heroes abound with so much in common 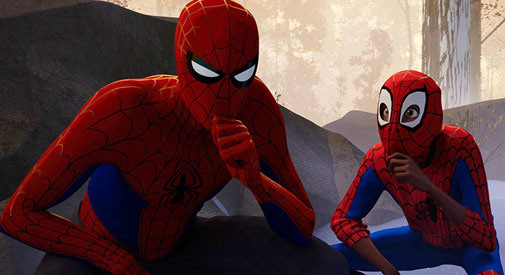 ‘Spider-Man: Into the Spider-Verse’: One bite and heroes abound with so much in common

“Spider-Man: Into the Spider-Verse’’ is a wild spin with a web of plots that not only passes the torch but also reinvents the Marvel comic on screen for a new generation and set of eyes. For starters, it’s animated, a cool blend by directors Bob Persichetti, Peter Ramsey and Rodney Rothman that’s a bit of the old TV cartoon, a bit of the blurry three-color printed comic and a lot of the creamy rich CGI we’ve come to know since Pixar punted out “Toy Story.” Also, there’s more than one Spider-Man – in fact, there’s a posse of spider-people, but more on that later – and this “Spider-Verse” includes a coming-of-age tale about a Brooklyn kid name Miles (voiced by Shameik Moore) who, like Starr in “The Hate U Give,” is an African-American kid attending a private school outside the neighborhood. Dad’s an overly cautious cop (Brian Tyree Henry, so good in “If Beale Street Could Talk”) and uncle Aaron (Mahershala Ali, “Green Book” and “Moonlight’’) strikes a hip big-brother figure, though pa considers him something of a black sheep. 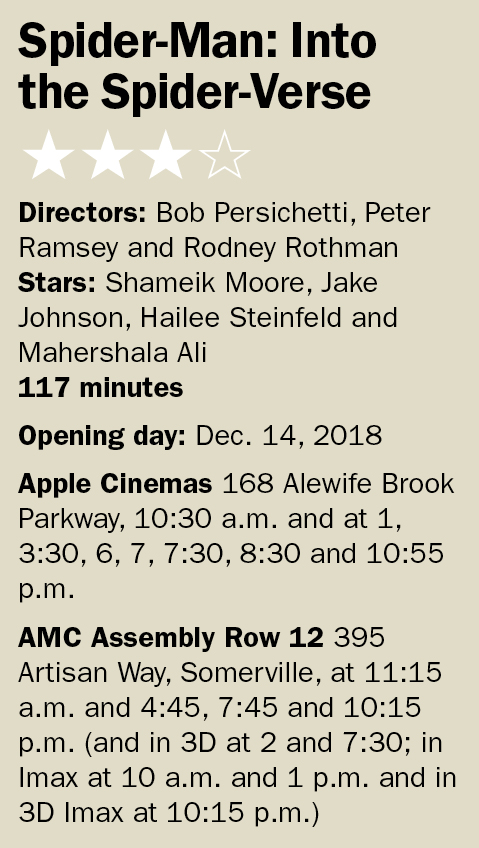 Miles is a kid at the crossroads of figuring out who he is and who he wants to be. Uncle’s tips on how to woo the other new kid at boarding school, a cute, sassy girl named Gwen (Hailee Steinfeld) doesn’t work out so well. But by now you’re probably wondering what any of this has to do with Spider-Man? Well, one night Aaron and Miles break out to tag a wall in a subterranean annex and Miles, after laying down his final aerosol flourish, is bitten by a radioactive spider. Paper, a girl’s hair and even some pigeons stick to his palms – talk about adolescent confusion – and he can walk on walls. In a return to the site, Miles encounters Peter Parker/Spider-Man (Chris Pine) fighting a giant demon goblin and a someone known as the Prowler. Spidey wants to shut down a collider set up by a mad mastermind with the self-aggrandizing tag of Kingpin (Liev Schrei­ber), but needs Miles’ help, while Miles needs Spidey’s help to make sense of his new powers.

Long and short, the collider goes off and uni-“verses” (Marvel’s, something Looney Tunes adjacent and slivers from the past and future) blend and merge. Now we’ve got a new Peter Parker/Spider-man (Jake Johnson), a paunchier, saucier version. The quest to shut down the collider remains, though this gruffer Spidey has ill-timed glitches the way Venelope does in the “Wreck it Ralph” films. Also now there’s spider folk from the pulpy noir past (Nic Cage, voicing an incarnation that seems right out of “Sin City”) a Japanese anime lass (Kimiko Glenn) and her trusty spider-bot and a wise-cracking spider-pig-toon (John Mulaney) who carries a massive mallet in his pocket. Lily Tomlin’s also in there as Peter’s take-no-shit aunt; Katherine Hahn is naughty and nice as a dour lab director with a deviously far-reaching grasp; and Stan Lee’s voice and countenance make a perfect last appearance in perhaps his best cameo ever.

The directing trio and writer Phil Lord (“The Lego Move”) do a deft job deconstructing both the film franchise and the comic series with wit and verve. If you’re a Spider-Man fan, there’s lots packed in here for you as insider nuggets while it all shoots off in a new direction. It’s packaged to cut smartly across cultural and generational lines, with animation that’s also something new and something old. “Verse” takes the web-head series to a new level that looks bound to catch on.