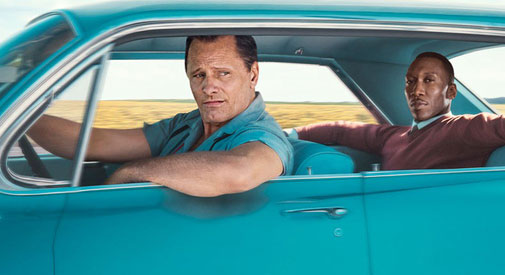 Peter Farrelly, best known as half of the brother tandem who made “Dumb and Dumber” (1994) and the chaotically uproarious “There’s Something About Mary” (1998), pulls something of an unexpected about face with “Green Book,” real-life saga about a white man chauffeuring a black man through the Deep South during the early 1960s.

The boss is Dr. Don Shirley (Mahershala Ali, a deserving Oscar winner for his work in “Moonlight”), a renowned jazz pianist tired of playing the Upper East Side who decides to take his talents south – in part to see the world, and also to make the world see him. His driver, a Bronx-bred Italian-American name Frank Anthony Vallelonga, aka Tony Lip (Viggo Mortensen). Tony is something akin to Robert De Niro’s fat Jake LaMotta – boy can he eat, he’s not one to take too much shit and he’s got a mouth. It’s “Driving Miss Daisy” (1989) in reverse in so many ways, with its racist backdrop still far too similar to what pervades our country now. One difference is that the current “green book” is an app with historical insights; from 1936 to 1966, it was a vital guide to safe spots in the segregated South.

For the most part, the film’s a buddy bonding road movie, as the aloof intellectual and motor-mouthed lout with a heart of gold break down cultural and personal barriers. At its best, Tony doesn’t judge Don Shirley after bailing him out of several compromising and potentially explosive situations where the jazz pianist dips into the bottle too much and wanders outside the lines. At its worst, Tony lectures Shirley about “his people,” Motown stars the classical musician hasn’t heard (Little Richard and Aretha) and the virtues of fried chicken – a cringeworthy scene, if just for the risky proximity of grease to a neatly pressed white shirt.

Farrelly lays it on a bit at times where films such as “Hidden Figures” (2016) “Miss Daisy” and “The Butler” (2013) respectfully observe and allow character and history to make points on their own terms. His actors, though, do a great job selling it, and forge a genuine chemistry, despite such overwrought handling – Ali welling with dignified resolve and Mortensen adding a ton of weight and tackling new emotional territory with a screwball sense of humor. Shirley has to stay in seedier hotels and can’t use the same restroom as white people, even though he’s the allegedly well-respected main attraction. Ultimately there’s the big end-of-tour performance in Birmingham at a white-glove country club (where Nat King Cole was once assaulted). The maitre’d, trying to appeal to Tony, explains that when the world champion Boston Celtics came to town, “even the big one didn’t get to eat in the club” after polite use of such phrases as “it’s a tradition” and “that’s how we do things down here.” Sign of the times, and one not to be forgotten.