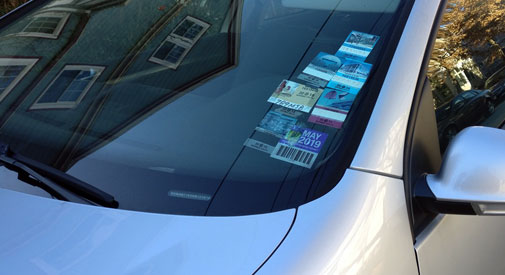 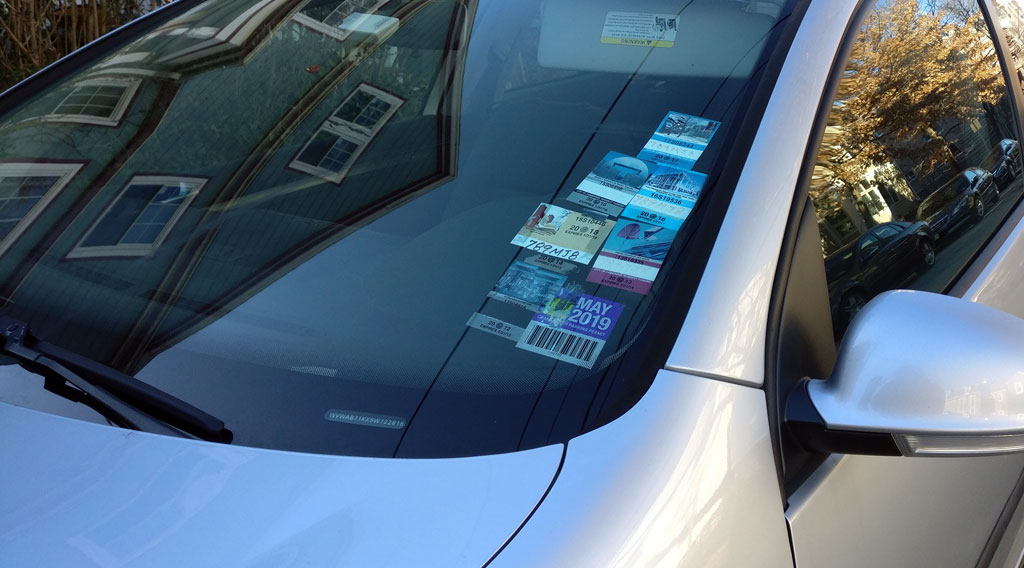 What if the city of Cambridge charged just once for new car registrations and ended annual renewals? (Photo: Ian Mello)

Yes, folks, it’s time again for the annual useless, nonsensical and costly replacement of your  parking sticker. More than ever – especially with a Monday “outside vendor system problem” that caused delays by shutting down the online renewal system – the pointlessness of this ritualistic nuisance can’t be denied.

For the first time, Traffic, Parking & Transportation Department director Joseph Barr revealed that fewer than 10 percent of the steady 38,500 permits issued annually are for first-time registered cars. That small percentage represents the predictable flow of university affiliates who come and go from the same apartment addresses on regular cycles.They don’t hang around, and new tenants immediately invalidate previous stickers. No menace of departed renters returning to park illicitly ever existed, and the steady decline of resident parking violations isn’t even published in the city’s annual report anymore. People have got the message, folks.

Notably, those numbers emerged from a City Council committee hearing in July called to raise the annual sticker fee to as much as $40 by 2022. Councillor Quinton Zondervan is the lead proponent for the increase.

The real cost of issuing stickers is anyone’s guess, but certainly more than the $25 fee. Zondervan, along with a couple of his fellows, made the absurd suggestion that increasing the fee will reduce the number of cars in Cambridge. To their credit, councillors E. Denise Simmons and Tim Toomey resisted the fee bump, despite Zondervan’s successive, watered-down exemptions and exceptions proposed to keep the increase in play and ultimately more complicated than the tax code.

Completely lost in the discussion is any justification for the renewal process. Cars displaying just one sticker are rare; parking control officers already have the means to validate suspicious stickers instantly – those handheld scanners are used daily to zap state inspection stickers to validate use of the pay-by-app meter program, as well as to flag meter feeding. That same state database includes the town of registration for each vehicle. Worst case, the officers enter a Massachusetts license plate number manually if things seem fishy.

Has anyone noticed that Cambridge stickers have the barcode on the inside? That’s the level of silliness you’re tolerating from city management.

Car owners pay hundreds of dollars annually to Cambridge for excise tax (and more than a thousand if you’re stupid enough to buy a Tesla). Boston residents pay nothing for their stickers; the program cost is a small fraction of what’s already paid, and any politician on the other side of the river knows that a new fee is a third-rail issue. Why are some of our own councillors championing more wasteful expense and hassle for their constituents? Here’s a hint: jobs.

The best approach would be to charge a one-time, $50 fee for new registrations and be done. Establish a provisional sticker for newbies if the bureaucracy insists. That’s plenty of cash to fund the direct cost of the new issues, and it relieves everyone else of the annual baloney.

Don’t have your 2019 sticker yet? At 7:20 p.m. Monday, there were 59 people in line. It was moving pretty fast, bu you’ll still waste the least amount of your time in line by showing up at Broadway shortly before closing, when staffers get motivated to quit for the day. That’s 5 p.m. Thursday. Use your waiting time productively by sending a message to your No. 1 Council vote asking why you’re there in the first place.

Gary Mello is a Central Square pharmacist, landlord and real estate broker with degrees in engineering.