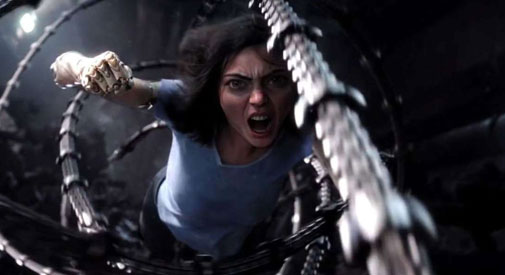 There’s no denying the entertainment value of Robert Rodriguez’s “Alita: Battle Angel.” It’s bombastic and wildly imaginative, and it spins one of the first relatively decent adaptations of a manga series. Granted, the bar is low (see: “Ghost in a Shell”), but with top-notch special effects and pulsing action sequences that have genuine stakes, Rodriguez has delivered upon his promise in terms of scale. A shame it’s so relentlessly dumb. 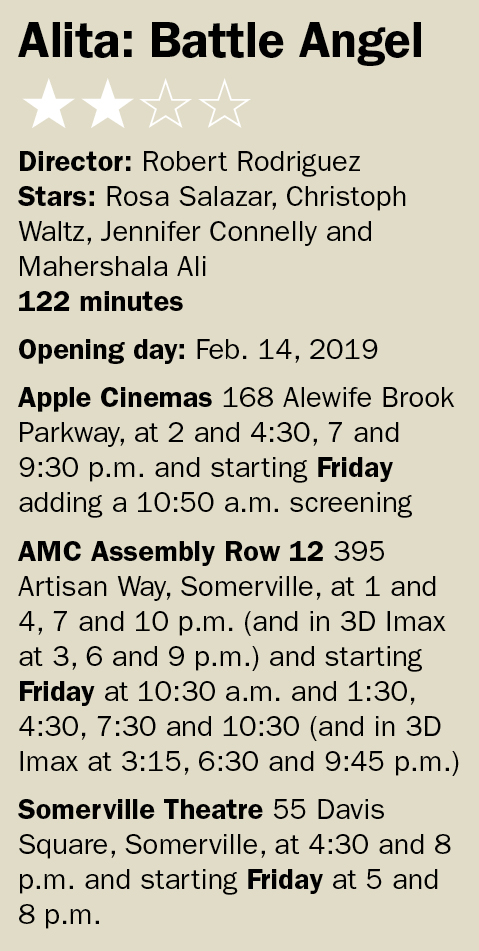 In the distant future where what remains of the universe has gathered in Iron City, a rubble- and debris-ridden area where lower-class citizens fight in a motocross game to move up in society, an abandoned Alita (Rosa Salazar) is found and repaired by Dr. Ido (Christoph Waltz) but appears to be unable to remember her life before being awakened. A cyborg, she soon comes to realize that with her past comes dark truths and violence, her body having been built to defend and attack on instinct.

Every bit of the film shouts missed opportunities, from the first 30 minutes of info dump exposition (that still leaves us bewildered) to actors that at best can be accused of phoning it in (poor Rosa Salazar could be delivering a good performance, but it’s lost under uncanny valley motion capture) and a storyline that focuses on the most mundane details even as an apocalyptic zealot threatens their world. When the most interesting thing the script wants to focus on is a tepid, chemistry-lacking will-they-won’t-they romance and a violently enhanced game of soccer, perhaps the filmmakers should’ve set their sights higher than simply making everything look futuristic.

It’s the cyberpunk visuals that flourish in the (clearly) James Cameron-produced picture, enhancing the story by immediately giving the world a clear sense of self. It’s a city made of scraps and parts, where seemingly everyone is part machine and anyone who isn’t might be attacking the former for parts to sell. It’s an unforgiving world, depicted in a scorched daytime setting and grim and gray night. When characters die they die gruesomely for a PG-13 film, the lack of human blood saving the rating but not undoing cyborgs getting their heads bashed in, teen delinquents being sliced in half and Alita fighting even at the risk of her body ripping apart. It’s not a film filled with optimism, veering more toward the survive-at-any-costs school of thought.

The sense of danger, coupled with hyperkinetic action choreography, vivid cinematography by Bill Pope and an electric score by Junkie XL allows the film to transcend basic action romps for something more adventurous and (purposefully) more akin to reading a manga or watching an anime. It’s fantastical to the point of being cartoonish, but with a grimness that never lets us forget the stakes.

For all “Alita” gains in technical achievements, it loses in dialogue that is near embarrassing, with wooden simplicity coupled with often rote delivery. Written by Cameron and Laeta Kalogridis, the screenplay opts to spell out practically everything, fearing the audience won’t be able to keep up. Perhaps that’s helpful for the technical mumbo-jumbo, but for familial beats, romantic moments or scenes in which a character comes to a deeper understanding of who they are, the less-is-more strategy would’ve worked best. We don’t have to see Alita hold out her actual heart to her would-be suitor to understand that she’d offer him everything to keep him safe; if we do, the screenplay hasn’t done a good enough job.

The success of the performers varies. Salazar does well when she’s given more to do; Mahershala Ali, as the villain Vector, shines simply based on charisma; there are also performers such as Jennifer Connelly and Keean Johnson onscreen only to fulfill scenes of narrative necessity.

There’s a want (from this critic at least) to see more films cut from the same cloth as “Alita: Battle Angel” because it means tentpole blockbusters are being given a chance to gamble in the face of an industry that’s come to value the familiar. While “Alita: Battle Angel” is ultimately a miss, it’s a near one, and with just the right amount of tinkering and with a screenwriter that could do justice to the sheer spectacle, it might’ve been worth talking about longer than it takes you to get from the theater to your car.