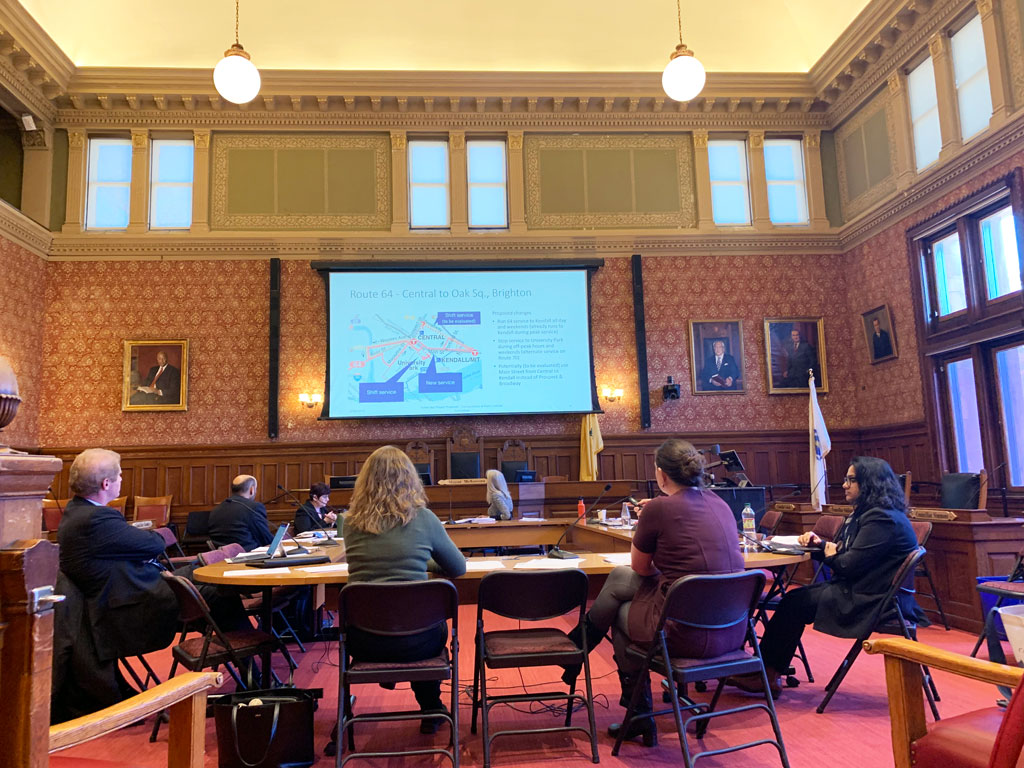 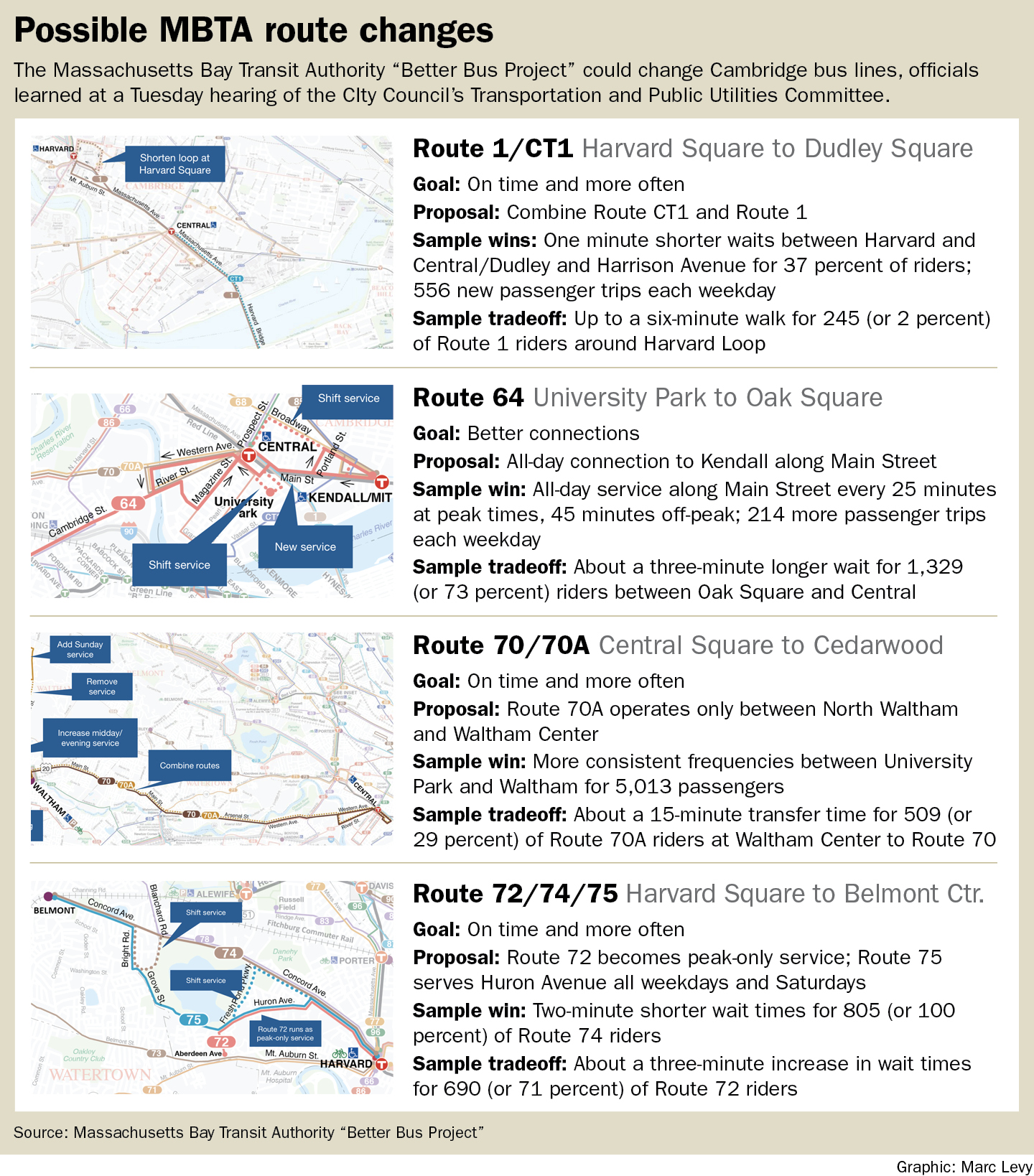 The prospect of longer walk times to some bus stops and longer waits at others raised eyebrows Tuesday at a “Better Bus Project” hearing with the City Council’s Transportation and Public Utilities Committee, but residents’ ability to alter MBTA plans seemed limited.

Proposed Massachusetts Bay Transit Authority changes to some bus lines were “a real concern” that held “academic implications” for children who rely on the buses, councillor Alanna Mallon said, and other councillors had other concerns, such as Dennis Carlone’s note of still unmet needs for more robust public transportation in business districts such as Kendall Square and around the Alewife T station.

State officials plan to roll out the changes Sept. 1.

As presented to the committee Tuesday at City Hall by Tegin Teich, a transportation planner with the city’s Community Development Department, Cambridge bus lines will see the removal of two Harvard Square loop stops on the Route 1 bus (down Massachusetts Avenue to Dudley Square in Boston); more Kendall Square and less University Park on the Route 64 bus (Central Square to Oak Square in Brighton), creating an all-day link between Allston-Brighton and Kendall Square along Main Street; a combining of the 70 and 70A buses to Waltham; and changes to lines between Harvard Square and Belmont that would run the 72 line to Aberdeen Avenue only at peak hours and shift 75 buses from Fresh Pond Parkway to Huron Avenue all weekdays and Saturdays.

It was mainly city officials on hand for a Tuesday presentation on proposed MBTA bus changes. (Photo: Tom Meek)

It’s all part of 47 proposed systemwide changes, all intended to cost no more than the current bus network and based on“about a year and a half worth analysis of every single route,” MBTA deputy general manager Jeffrey D. Gonneville said at a later forum held at Cambridge Rindge and Latin School.

“We know where they’re congested, we know where they’re meeting our service standards. We know how many customers are getting on and where they’re getting off. These recommendations look at the routes and some of the meandering these routes do and say, ‘Okay, if we just streamline this, eliminate this one stop, it would save X amount of minutes on a trip,” Gonneville said.

Streamlining routes will give the MBTA capacity to add buses and then drivers, eventually bulking up routes in the off-peak hours between 7 to 9 a.m. and 4:30 to 6:30 p.m., Gonneville said. “Once you’ve built your foundation and have these streamlined routes, we’ll now be in a position where we can talk about various corridors and investing back into our system, putting more drivers back on the street to help with capacity issues that we have,” he said. “All it will do is benefit the customers.”

About half the response he’s seen to changes while doing several science fair-style forums like the one at the high school has been extremely supportive, with strong opposition at around 15 percent, he said.

Cambridge officials at the committee meeting seemed to be leaning toward the negative. In addition to Mallon’s and Carlone’s concerns, vice mayor and committee chairwoman Jan Devereux called the three-line shift to Huron Avenue “confusing” and said it would be hard to really assess the impacts without being able to compare current and proposed schedule change data. Councillor Quinton Zondervan called the process “frustrating.”

Councillor Craig Kelley wanted to know to what degree the city could influence MBTA decisions.

The city had an open and collaborative relationships with the authority, said Joseph Barr, director of the city’s Traffic, Parking & Transportation Department. But while the city mostly owned the streets the buses ride on and the sidewalks that host the bus stops, the MBTA could make the schedule to stop or not stop at their discretion.

Councillors voted officially Monday to oppose a proposed 6 percent fare hike; the Better Bus changes are open to public comment until March 13 with implementation expected to happen this year.