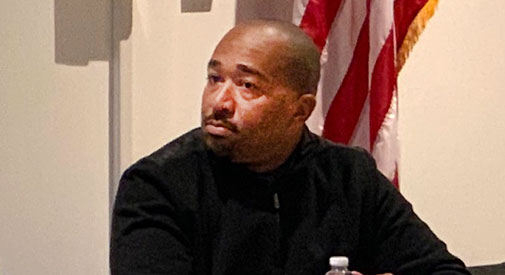 Sarah Gallop of MIT and the Kendall Square Association speaks at “Growing Divides in Cambridge: A Tale of 2.0 Cities” on Thursday. With her are panelists Chuck Collins and Damon Smith. (Photo: Tom Meek)

The experts at Thursday’s talk on “Growing Divides in Cambridge: A Tale of 2.0 Cities” came with suggestions and progress reports on handling the city’s widening socioeconomic chasm.

As part of the Cambridge Center for Adult Education’s “Conversations on the Edge” series and moderated by Geeta Pradhan, president of the Cambridge Community Foundation, the panel included Chuck Collins, director of the Program on Inequality and the Common Good at the Institute for Policy Studies think tank in Washington, D.C.; Sarah Gallop, co-director of the MIT Office of Government and Community Relations; and Damon Smith, the principal of Cambridge Rindge and Latin School.

Smith pointed to work on the “Level Up” program, now two years in to eradicating a structure that put students on two tracks through high school, only one headed for college, that was separated largely by family income and race. “It’s been difficult,” he said, in a city that can be most “progressive when looking outward,” but an education that was the same for every student was his offering as a solution for keeping Cambridge a united community. 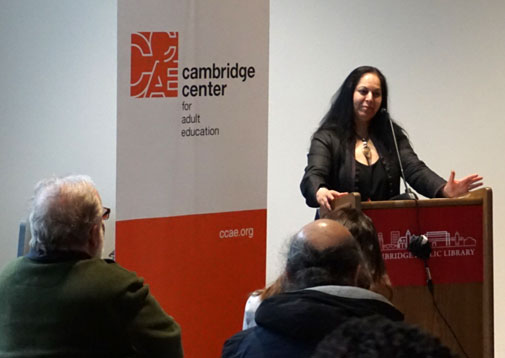 Gallop spoke as a co-founder of the Kendall Square Association, which represents hundreds of businesses in a variety of industries. Building diversity and equity into business models is demanded by young employees as part of their working environment, she said, and will be “part of the success equation.”

Collins had the most potentially controversial part of a solution for the “global city phenomenon supercharging … four decades of extreme inequality” in places such as New York, San Francisco and Boston: a luxury real estate surtax. Kicking in on property transfers of more than $2 million, it could produce $350 million annually in Boston that would be earmarked for building affordable housing. (Boston is also looking at a “flipping tax” on property resold within two years of purchase.)

Each could help Cambridge, a “prosperous city with more jobs than people” where 15 percent of the city lived below the poverty level and “one in six children are poor,” Pradhan said – the “Tale of Two Cities” from the event title.

The “Conversations on the Edge” series was initiated by CCAE staff and board members in the wake of Donald Trump’s election to talk about issues that had no “clear answers” and engage the community. Thursday’s event drew a diverse crowd to the Cambridge Public Library’s Central Square branch. Though the event was sold out in advance, more than half of the 120 seats were empty –possibility the result of sharing a night with the fourth installment of the city’s Cambridge Digs Deep diversity series, taking place at the same time at Cambridge Rindge and Latin High school.