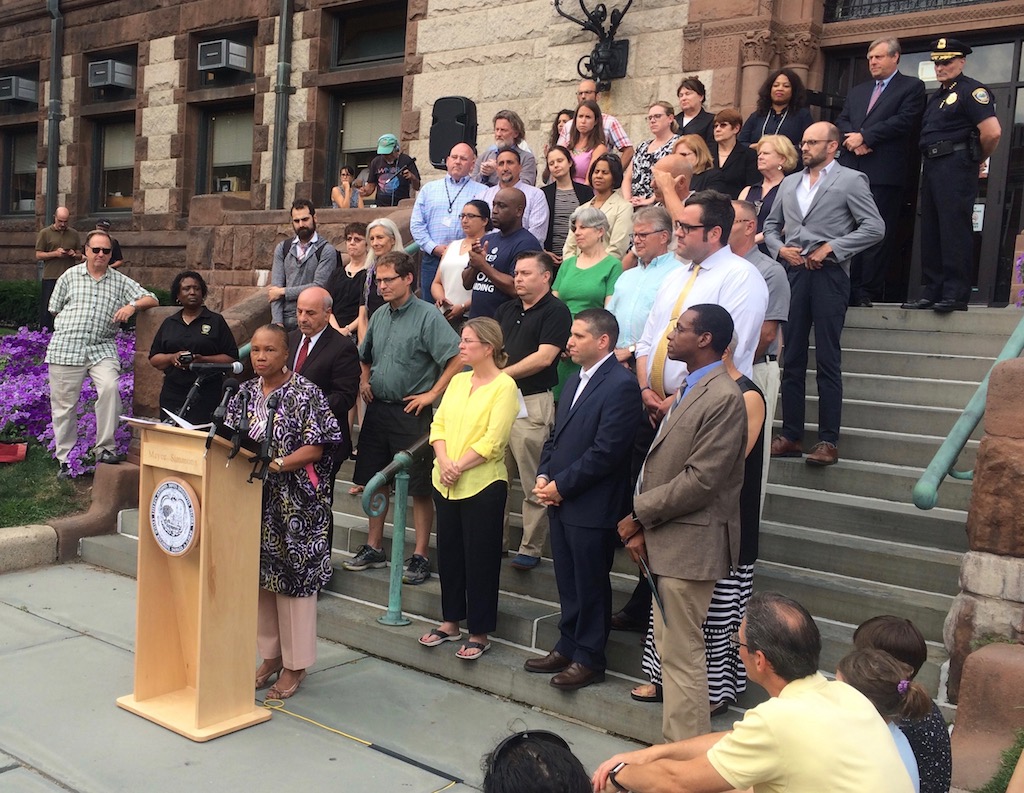 A rally at City Hall held Aug. 14, 2017, responded to a violent white supremacist gathering in Charlottesville, Virginia, but only hinted at some of the racial animosity to come in America and Cambridge. (Photo: Marc Levy)

The city launches its Cambridge Digs Deep sessions Wednesday, a program initiated by Mayor Marc McGovern and city councillor Sumbul Siddiqui to spur a citywide conversation about race, diversity and equity. The program partners with the Disruptive Equity Education Project – a professional development organization that specializes in building community and breaking down barriers based on stereotypes and preconceptions. Deep will lend its services to help facilitate and shape the conversation.

Part of the impetus for the series were ongoing concerns raised by the Black Student Union at Cambridge Rindge and Latin School, which also get a hearing at Tuesday’s meeting of the School Committee, and recent viral flares of racism including a July confrontation between a Harvard employee and the mother of a biracial child who was playing “noisily” and a public schools employee who used the N-word with a student. Siddiqui also cited a divisive climate created by the administration of President Donald Trump and national events such as last year’s white supremacist gathering in Charlottesville,Virginia, and the migrant caravan seeking asylum at the southern border.

“Cambridge is not truly the progressive utopia that everyone sees it as,” which makes constant examination and reevaluation necessary, McGovern said.

One of the tools Deep and chief executive Darnisa Amante will bring to the table is the exploration of microaggressions versus macroaggressions, as well as the understanding of intent and impact. As illustration, McGovern cited a scenario in which a teacher on the first day of a high school honors English class asked the lone black student if he was “in the right class.”

“The teacher might not think they are racist,” McGovern said, “but there’s an impact.”

McGovern and Siddiqui believe their deep roots in Cambridge will help give the workshops a historical perspective, and said they hope for a dialogue that will “get people outside their comfort zones and begin to see the ways in which identities – such as race, class, gender, religion – impact our lives.” Expected outcomes are a “bit of a work in progress,” McGovern admitted. “We’re going to be learning as we go.”

“We don’t expect a prescribed list of policies,” Siddiqui echoed, “but we’ll be listening.”

Also on the agenda will be issues of class and inclusion made newly prominent by an affordable housing overlay zoning proposal raised by the Envision Cambridge master plan process.

“Our goal is to ensure that people can talk about race and inequity – and know the differences between diversity, equity, and inclusion, race, racism and oppression – in a way that does not ostracize others and/or make anyone feel unwelcome,” Amante said. “We will, however, push with love.”

The initial Cambridge Digs Deep session takes place at 6 p.m. Wednesday in the gymnasium of the Fletcher Maynard Academy, 225 Windsor St. Four more are scheduled for the early part of 2019. The sessions are set up to build on each other, but there is no requirement to have attended previous sessions to be part of the conversation. McGovern and Siddiqui said they hope for a strong turnout and a constructive dialogue.