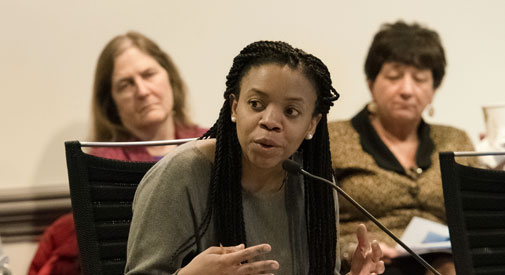 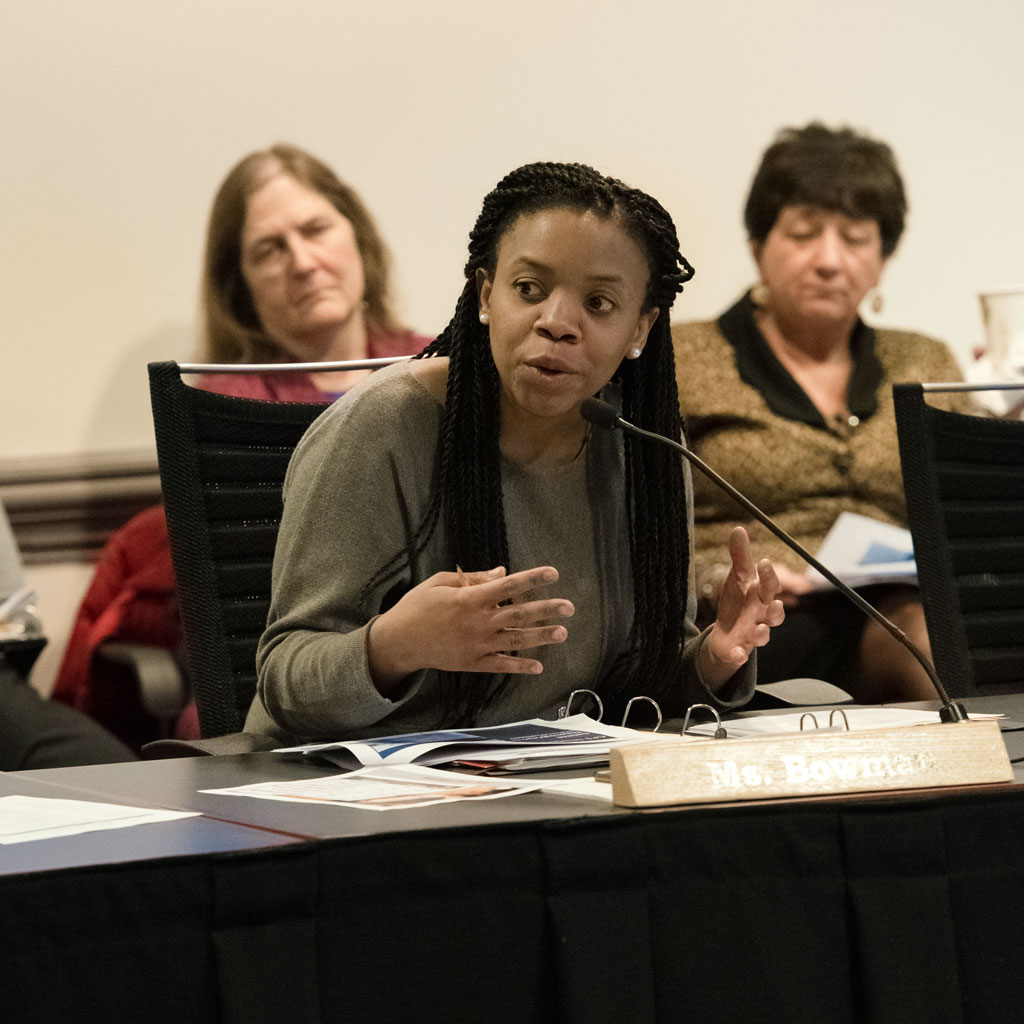 A school district budget of $202 million passed the School Committee on Tuesday, heading off for an up-or-down vote by the City Council on May 8, after looking briefly like it might be delayed by a member exasperated by the process.

That member, Manikka Bowman, acted after Finance Committee co-chair Emily Dexter proposed an amendment to the budget to redirect $259,400 from administrative hiring and put it instead into classroom-level positions, which itself followed budget changes sent Monday by Superintendent Kenneth Salim.

“If there was a process in place that allowed us to be able to be in conversation with our superintendent around his amendments and have a final round [of conversation] and then bring it forth, maybe we would be in a different place right now,” Bowman said. “But that did not happen. And as a result, I want to exercise my right to table this conversation, so we can actually have that process.”

Noting that she’d made the the same complaint about late changes and the resulting “sausage making” for each of her three years on the committee, she called taking an extra week to understand Salim’s changes an “opportunity to change that dynamic.”

Mayor Marc McGovern, while agreeing late changes were bad in principle, worried about the timing – with no regular committee meetings scheduled, the committee would have to call a special meeting to move the budget to the council – and when Salim spoke, he reminded Bowman that the budget process is one he adopted when arriving in the district in 2016, and suggested he would be open to changing the process. In the meantime, Salim provided enough explanation for the changes to convince Bowman to allow the vote to go forward.

The budget is the district’s biggest in history, an increase of $10.7 million over the previous fiscal year, or 5.6 percent. It includes $335,000 in facilities maintenance and $240,000 in technology, and adds the equivalent of 59 full-time employees, reflecting in part an 11 percent rise in student population over five years that’s projected to bring the district to 7,415 in the next school year.

“We have a lot more administrative money in this budget than I’m comfortable with,” Dexter said, pointing to positions such as a $160,000 chief planning officer and a $48,000 clerk to greet and direct at the central administration office. “Since 2011, we’ve added 13 professional positions to the central office.” The proposed positions would bring it to 15, which Dexter preferred to see bundled with an additional half-time literacy coach as $259,000 for classroom-level hires such as a Cambridge Street Upper School guidance counselor and more reserve teachers. “We take that quarter-million dollars and we put it into the schools, in the classroom,” Dexter said.

“Our per-pupil spending adjusted for inflation has actually gone down since 2008,” Dexter said. Describing her own problems with the budget process – starting with a status quo budget that brings a funding proposal from the city manager before input from the School Committee or public – she asked: “When are we going to start budgeting from the classroom up, rather than from the district down?”

Seconded by Laurance Kimbrough, Dexter’s amendment led to some debate, including an argument by McGovern that losing 4.4 reserve teachers through deployment to classrooms would likely correct itself somewhat as enrollment numbers fluctuated – and that if more kids than are expected showed up, the district would fulfill its contractual obligations to find more teachers.

A bigger debate emerged in comments by Salim and member Patty Nolan, who said she was particularly struck by the budget crossing the $200 million threshold, with another $50 million or so earmarked as coming from the city budget, compared with expectations and achievements. She pointed to Lawrence as an example of a district that seemed to be doing more with less, considering a “severe cut” in central administration positions but soaring graduation rates.

“We are a district lucky enough to have a central administration that is already staffed at a level that I don’t think any other district is. It’d be really helpful to know if there’s any other district of 10,000 students or less that has this kind of central administration support, because I’m a real believer in pushing down the responsibility and authority into the schools and to having excellent leaders on the ground,” Nolan said.

Salim, meanwhile, pushed to fill empty administrative positions by saying that more coordination was needed districtwide. “Our view around improvement is not solely a discussion around resources. Our view around improvement is about how we’re doing the work with the resources that we have,” Salim said. “We can have, you know, hundreds of more positions and nothing will change. For me this is about how the pieces fit together … as we’re adding staff, it does require support coordination, at every level.”

McGovern – drawing murmurs of support most audibly from committee vice chair Kathleen Kelly – praised Salim as being the most flexible and accommodating of the three superintendents he’s worked with in terms of staffing and budget requests, but rebuked committee members: “We need to have some discipline in the city and in this body.”

“It’s always easy to add, because we have the money to do it,” McGovern said, reminding members of how many new full-time employee equivalencies were proposed in the budget. “Fifty-nine positions! So if we go to 62, we’re good? Everything’s going to be perfect in the district? Come on.”

After the discussion and urging by Fred Fantini, Dexter’s co-chair on the Finance Committee, Bowman withdrew her motion to set aside the budget vote, saying “I do not want to be in this situation again next year,” and the committee voted.

… before four roll call votes were taken on the budget as proposed. 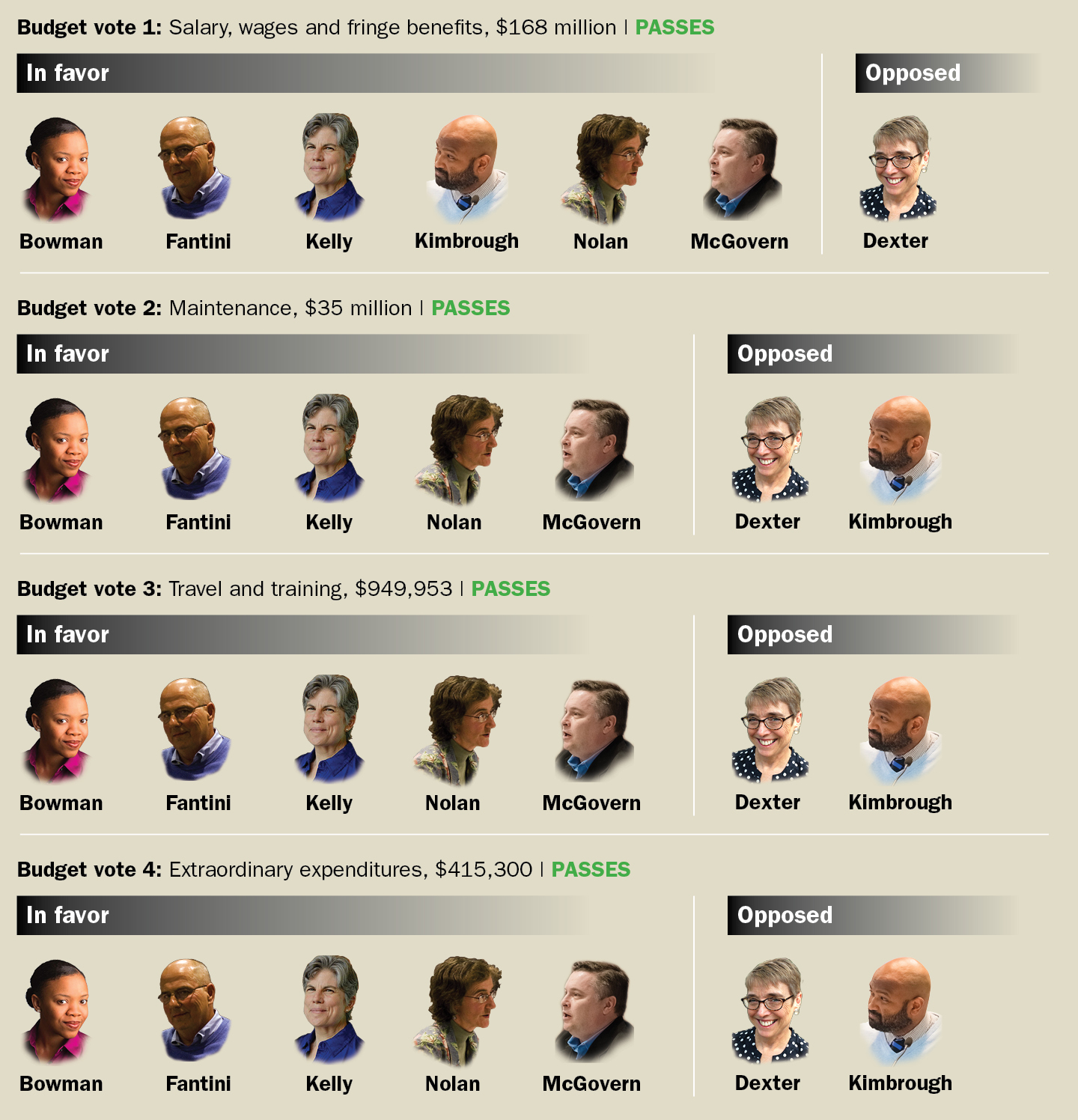 That led to a final roll call on the total budget, which passed, 5-2 …

… and a final vote to prevent the budget vote from being reconsidered, which passed 4-3.