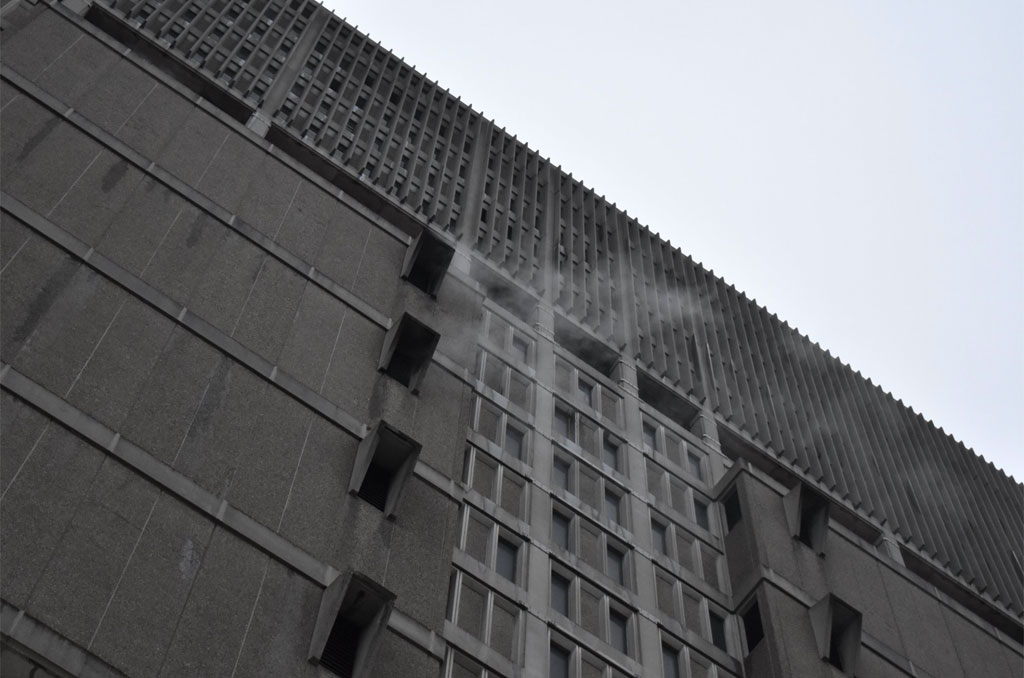 By Morgan Hume and Marc Levy

Steam escapes Saturday from a former courthouse on Thorndike Street in East Cambridge, mistaken by many for fire in the empty building. Click through to see the original image. (Photo: Massfirefighter1 via Twitter)

A false fire alarm Saturday at the long-empty former East Cambridge courthouse has upset neighbors, and some city councillors are none too happy about it either – because the state doesn’t seem to be taking care of the property, and apparently didn’t shut it down correctly to begin with.

“Nine firetrucks and 25 personnel responded to what seems to be smoke coming out of an upper floor but was really steam that was caused by Veolia not shutting off the steam to the building. As a consequence, there’s about 10 feet of standing water in the basement” that the state must clear out with the help of environmental agencies, councillor Alanna Mallon reported Monday in a late policy order. The last time standing water was cleared, it caused flooding in neighboring residents’ basements, she said.

The 7:17 p.m. Saturday call was the fifth time firefighters have been called out to the former Edward J. Sullivan Courthouse on Thorndike Street this year, and just the latest in a string of concerning incidents. This winter, the pipes froze, meaning there’s no sprinkler system in case of an actual fire – and on Saturday, firefighters couldn’t go above the fifth floor because it was so hot in the building, Mallon said. The building has no electricity. And neighbors said pieces of the facade are falling off the building. 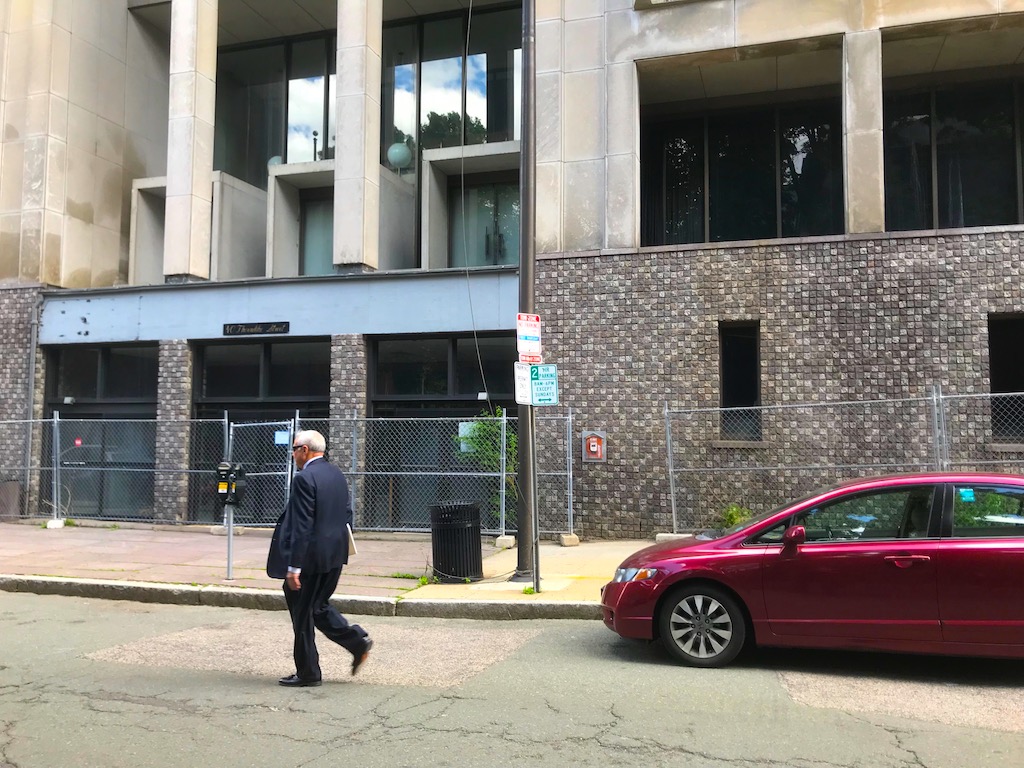 The courthouse, seen Tuesday, has been entirely empty since June 2014. (Photo: Marc Levy)

To top it all off, literally, a beacon on the 22-story building no longer operates to warn away aircraft, a possible violation of federal law. “They are fairly often helicopters flying around our neighborhood,” resident Heather Hoffman noted during the council’s public comment period.

The 40 Thorndike St. tower was put up in the 1970s despite strong opposition throughout the residential neighborhood, and it began to be vacated in 2008 for renovations. But it was so decayed and ridden with asbestos that the Middlesex County Superior Court remained in Woburn, and Cambridge District Court moved to Medford; the final residents of the building were the prisoners in the jail atop the building, who were moved to the Middlesex House of Corrections in Billerica in June 2014.

The building is headed toward private renovation into an office tower with 24 units of housing, in a plan that is little more popular than the courthouse among some residents. The proposal by Legatt McCall spent years in courtrooms and remains bogged down by the developer’s call for parking spots at a nearby city-owned garage.

Controversy over the plan and the state’s handling of it spilled over into discussion Monday of maintenance at the empty structure.

“There are definitive procedures when you close down a building. And it seems like very few of them are undertaken by the state,” said councillor Dennis Carlone, suggesting the state’s Division of Capital Asset Management and Maintenance failed a simple checklist that smaller property owners follow all the time – including shutting off the water so pipes don’t freeze in the winter.

“There are also techniques by people who want to get rid of a building – just letting it fall apart,” Carlone said. “The state has never looked good related to this building. And unfortunately, they seem to be going out of ownership the same way. And that’s unfortunate, because it affects the neighborhood.”

Matt Cocciardi, chief of staff for the state agency, was contacted Tuesday for comment.

Hoffman, who said the city should be doing more to hold the state accountable, had an equally skeptical view of DCAMM’s management. “The commonwealth, in an attempt to bully us into accepting a really bad proposal – which the city is also in favor of, officially – is letting this building fall apart,” she said.

It was a theme Carlone and Hoffman also sounded last month as speakers at a town hall meeting, held at the Kennedy-Longfellow School with state Rep. Mike Connolly to discuss an alternative plan to reclaim the courthouse for public reuse. More than 1,000 people had signed a petition expressing interest in redeveloping the site in other ways. 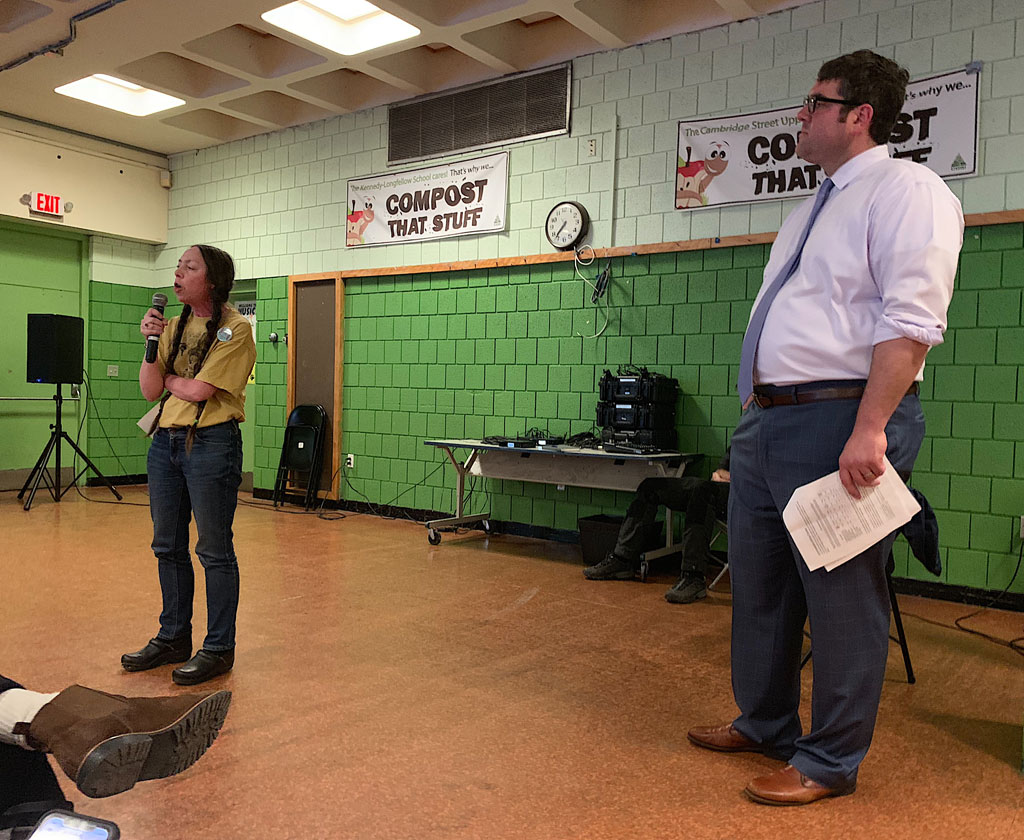 The May 16 town hall began with an introduction from Connolly, who explained that although the building faces issues like asbestos, it is still an asset to the public.

Afterward, members of the community presented on different aspects of the building and the Leggat McCall proposal, including president of the East Cambridge Planning Team Chuck Hinds, designer and Harvard University lecturer Chris Matthews, and Hoffman and Carlone.

Hoffman’s presentation focused on the city’s failure to follow its own disposition ordinance. Leggat McCall needs the City Council to approve the lease of 420 parking spaces in the First Street Garage, and the vote can change whether the courthouse is privatized or remains with the public; but a previous meeting called by the city manager about the parking garage did not address the different ways the garage could be used, she said.

Later, Matthews highlighted how the real estate in East Cambridge is becoming increasingly valuable, and he emphasized the importance of the council’s decision on the parking proposal.

After about an hour of presentations, the floor was open for a discussion between all those in attendance. While the organizers of the meeting and many audience members were in favor of public reuse for the courthouse, others supported the Leggat McCall proposal.

Although the plan wasn’t perfect, it was a compromise resulting from a fair process, resident Loren Crowe said – and in a democracy, you don’t always get what you want, but you have to accept the results.

Dan Eisner, another resident, agreed the Leggat McCall proposal was in the best interest of the community, because it would provide East Cambridge with more affordable housing and attract more customers to businesses on Cambridge Street.

“As so many people said tonight, if the parking spaces don’t get leased, the building will just continue to sit there, dead and rotting. And so, what we should do is just take the best thing that we can get, which is this current plan,” Eisner said.

This post was updated June 6, 2019, to correct the nature of Heather Hoffman’s comments at the May 16 town hall.