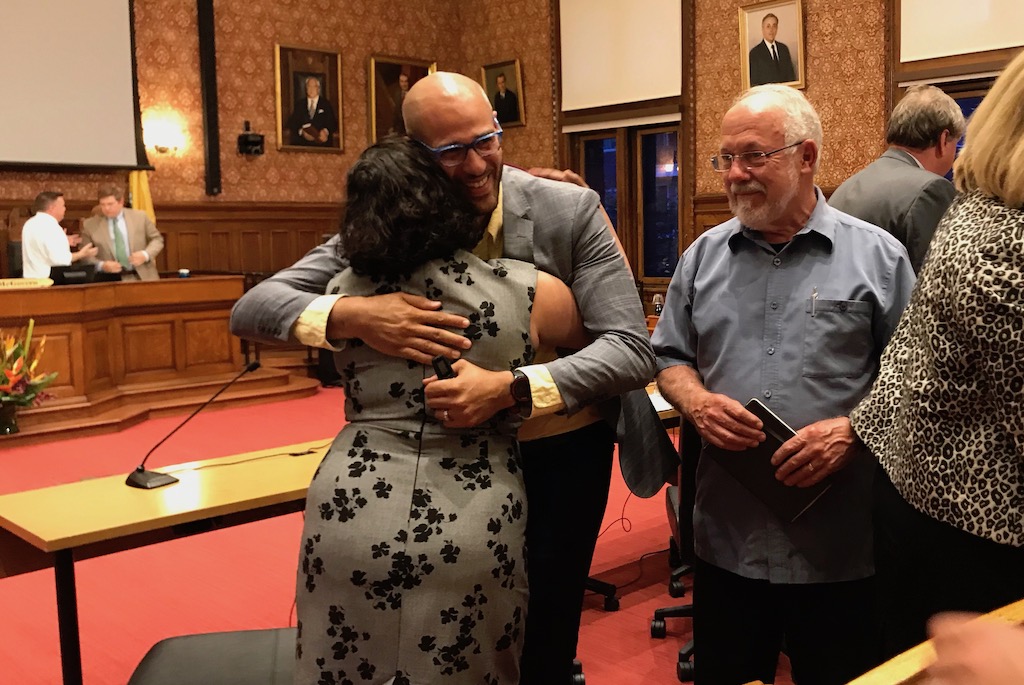 A Central Square business improvement district won council approval Monday with a pitch to be cleaner, more welcoming and lively and a stronger promoter of square arts and businesses – what the business association head Michael Monestime described as “place keeping over place making.”

“Communities will say, ‘We want to make this place something special.’ Central Square is already very special,” Monestime said. “We want to retain that.”

The work will be funded by a fee added onto the property taxes of those within the district, which stretches from City Hall to Lansdowne Street along Massachusetts Avenue, with Bishop Allen Drive defining its northern border and Franklin and Green streets its southern border. The district should emerge with around $1.2 million a year, or around $6 million over its initial five-year life. Tax-exempt properties within the district such as the Massachusetts Institute of Technology, YWCA and The Dance Complex also want “skin in the game” and were committing to contributions, Monestime told city councillors before their unanimous vote to approve.

The district concept had been endorsed in several studies of the square and attempts to begin one were undertaken a couple times in decades past, but previous tries failed to win the minimum support of 60 percent of property owners. Over more than a year and a half of work, Monestime and partners such as George Metzger won over 73 percent of property owners, representing 81 percent of the district’s assessed value – and feel they could have gotten more.

“We stopped at that point because we felt we did a good job … we always knew we were going to overdeliver, we weren’t going to inch across the goal line,” Monestime said. “That does not mean 27 percent was in opposition. We couldn’t track down every P.O. box in Fort Myers or every property owner.”

“Something that seemed so impossible is now right before us,” Winters said.

Most for cleaning and maintenance

In a breakdown of what the district will do for Central Square, a presentation showed 42 percent of the funds going to cleaning and maintenance, with another 8 percent for beautification and capital projects. The next largest amount is the 19 percent of funds used to pay a living wage to “ambassadors” who will check in regularly with business owners and greet and help visitors, but also be trained in everything from conflict resolution to CPR – and might even carry Narcan, which can reverse an opioid drug overdose.

Twelve percent of the budget will go to promotions and events and the final 5 percent to “annual priorities,” essentially funding the work of the Central Square Cultural District – a state designation without state money to back it up. “We want to create a compelling brand identity,” Monestime said, describing Central as a “hub of diverse activities that serve all and will act as a magnet for creative new possibilities with a really strong focus on the arts [and with] inclusive and local economic development in a thriving business environment. People will come to the square to connect, shop, eat and be entertained.”

Another 14 percent of funds will go to administration and overhead. For the five years the district is in place, the Central Square Business Association will serve as simply a committee within it, and the district will get access to CSBA assets such as its mailing list and social media accounts. Property owners must vote every five years on renewing the district, and they have a chance to be among its leaders; board nomination forms are expected to go out Thursday, and an interim board will form the permanent board and set the membership of its large committees.

Ambassadors by end of August

Residents should see the first signs of the district this summer: a website and, by the end of August, the presence of ambassadors. (Monestime said the ambassadors should be local, and Mayor Marc McGovern went one better by suggesting some could be recruited and trained from among the city’s homeless.)

“This is the turning point in this campaign, going from petitioning to rolling up our sleeves to be able to do the work, and listening to voices that we’ve heard on making sure that it’s representative, and that this is a resident benefit in addition to being one for business and property owners,” Monestime said.

The district demands real partnerships, he said, and that includes with the city. The dollars set aside for cleaning and maintenance supplements rather than privatizes the work already being done by the Department of Public Works. The point came up when councillor Quinton Zondervan wondered if city workers could “step up more” in efforts to maintain the square, which is a major transportation hub with a dense population and several social service agencies

“Why doesn’t the city do everything we’re proposing to do?” Metzger replied. “What we’ve come to realize over the past two decades we’ve been talking about this is that Central Square has a lot of very unique needs. If the city cleans the square three times a day, which it does, we really need to have the square cleaned six times a day, or all day long. And that’s really what this management vision is all about – having a 24/7 virtual presence within the square to take care of things as they happen.”

City Manager Louis A. DePasquale assured Zondervan that the district wasn’t the city’s chance to get away with doing less. In fact, it wouldn’t work without the city providing services. The district came together with the help of his own office and those of finance, assessing, the city solicitor, public works, traffic, community development and the arts council, he said.

Even after all that, “these are somewhat uncharted waters,” DePasquale said. “This is a learning experience for all of us.”