After declaring transit ‘state of emergency,’ Kendall leaders list the solutions they seek 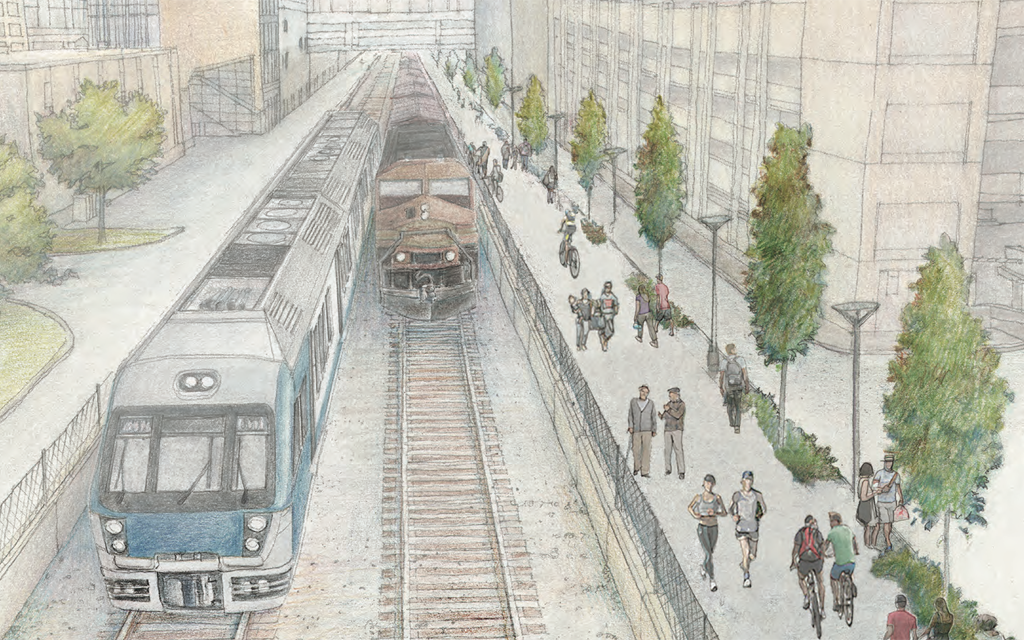 After declaring transit ‘state of emergency,’ Kendall leaders list the solutions they seek

An illustration in a report from Transport Kendall imagines commuter rail, freight trains and a multi-use path side by side through Kendall Square.

Leaders in Kendall Square have issued a transportation action plan as a follow-up to a June 24 letter to Gov. Charlie Baker and other top politicians saying the state’s “transportation crisis has risen to a new level, and we are declaring a state of emergency.”

“Current bus service provides a third of all MBTA rides – 450,000 bus trips – each weekday in the Boston area,” the report says, but “has been woefully underinvested in … No comprehensive service planning has been done in 30 years, and gaps in connectivity have arisen. The system still operates with route designs based on decades-old travel patterns and outdated Boston economy from the early 1990s.”

Traffic signals need to be retimed and transit signal priority is needed for buses so they can squeeze through red lights, along with dedicated bus lanes or at least sections dedicated at intersections, says the report supported by the city’s Community Development Department, Cambridge Innovation Center, Cambridge Redevelopment Authority and others in the Transport Kendall group, with findings from a Kendall Square Mobility Task Force formed in 2015.

But reinvestment is key, according to the report – and the letter with more than 40 signatories that preceded it but followed the spectacle of the June 11 red line derailment.

“We should be asking, ‘How do we build a transportation system that grows our economy?’” the letter said. “The Massachusetts Department of Transportation and the MBTA say they lack the capacity they need even to achieve a state of good repair in fewer than 13 years. The current plan of completing the MBTA backlog by 2032 is simply unacceptable. It is time to raise revenue for transportation and end this crisis.”

Forty-one percent of trips around Kendall are by mass transit and 34 percent in private car, according to municipal data from 2014, but the Transport Kendall report wants to lower that to 30 percent.

That will need improvements in the alternatives to private cars, including the red line trains.

The red line is the MBTA’s busiest line, with more than 280,000 passenger trips each weekday, and Kendall has the eighth-busiest station in the system (and the fifth-fastest growing). But that’s troublesome. since Kendall Square station entries already increased 34 percent from 2007 to 2016 and are expected to double from 2012 to 2040. “Today’s red line travelers in Kendall Square often find themselves on full trains and crowded platforms, sometimes getting left behind,” the report says. “The increase of passengers will greatly exacerbate today’s problems.”

According to the report, looking at a new fleet of red line cars (enabling 50 percent more capacity at rush hour, or a train every three minutes, but estimated to be fully operating only by 2024):

The current maximum design capacity for the red line is 13 trains, or just over 20,000 passengers per hour. In 2016, the average ridership at 8 a.m. was already almost 24,000, which is more than the estimated maximum capacity. Observations made in 2015 showed that in reality there is a range of 10 to 14 trains per hour arriving in Kendall, which is about a four- to six-minute headway. Those trains also are not necessarily evenly spaced, which causes bunching, overcrowding and passengers being left on the platform. With the new cars, the maximum design capacity will increase to 20 trains, or just over 31,000 passengers per hour. With the current demand and additional growth expected in Kendall Square, overcrowding could continue to be a challenge in the future even with the design capacity increase.

“Our transportation system is facing a crisis, but with every crisis comes an opportunity. Transport Kendall prioritizes the key investments that our economic center needs in order to continue thriving,” said C.A. Webb, president of the Kendall Square Association. “Kendall leaders continue to call on our elected leaders to direct the revenue our transportation system needs in order to enhance the system and serve more people with increasingly frequent and higher quality service. Our economy and our climate depend on it.”

The full report can be seen here.