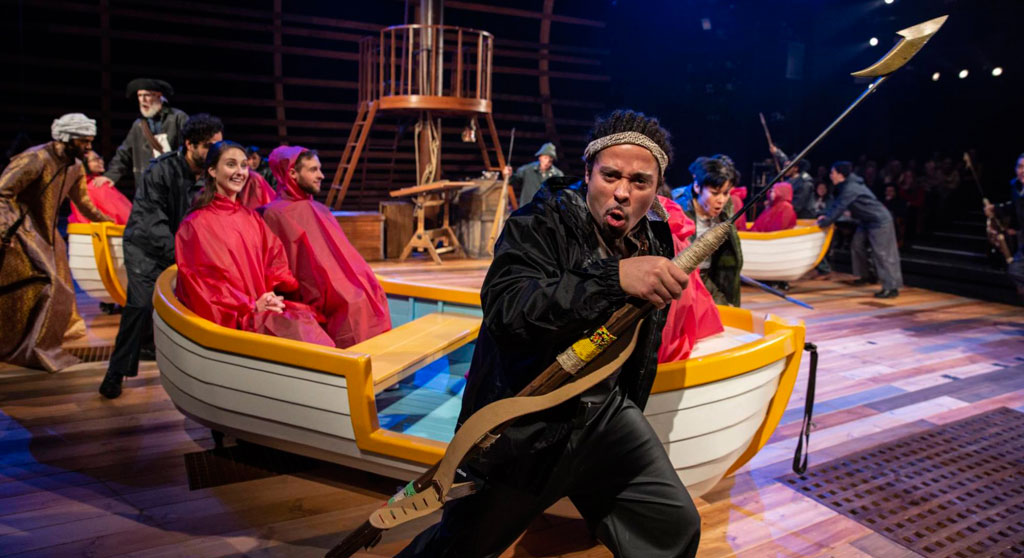 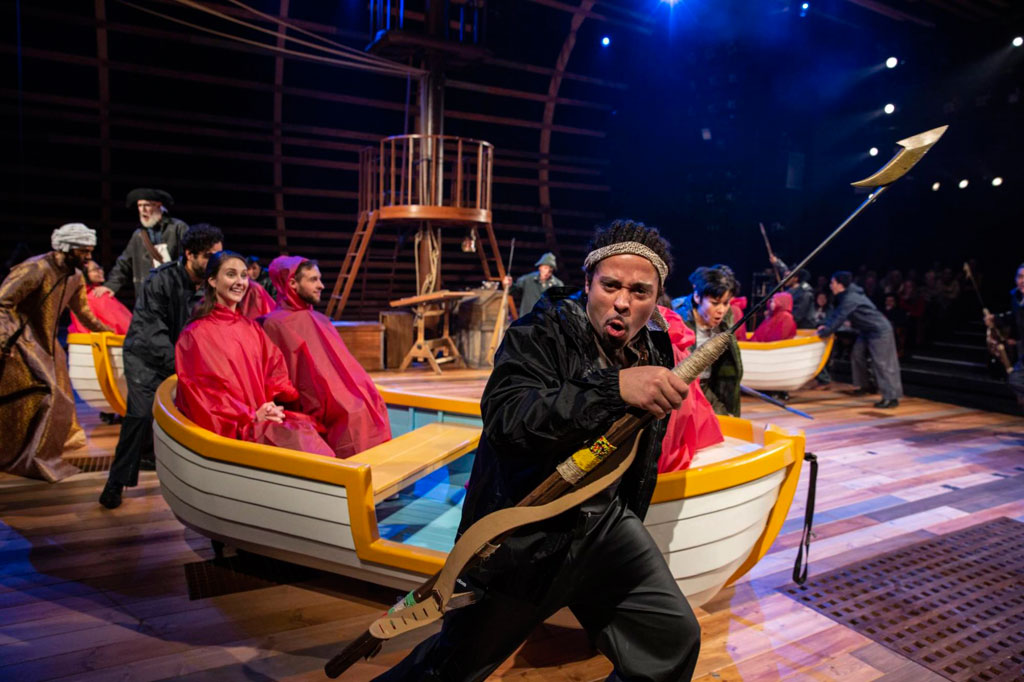 J.D. Mollison and other actors bring audience members around the stage in “Moby-Dick” at the American Repertory Theater in Harvard Square. (Photo: Maria Baranova)

There are a lot of adjectives one could apply to “Moby-Dick,” the musical adaptation of the novel getting its world premiere at the American Repertory Theater in Harvard Square, but “boring” would not be one of them. Considering the source material and the three-and-a-half hour run time, that may come as a bit of a surprise, but given the success of Dave Malloy and much of the same creative team in adapting (a portion) of “War and Peace” into “Natasha, Pierre & the Great Comet of 1812,” maybe it shouldn’t be a surprise at all.

Like the mind-blowing “Natasha” – which rocked the Loeb Drama Center when it debuted four years ago – the book, music and lyrics don’t necessarily conform to any standard theatrical forms. But Herman Melville’s book doesn’t exactly conform to traditional literary norms. Malloy and “Moby-Dick” co-developer and frequent collaborator Rachel Chavkin (who directed “Natasha”) take the unconventional structure of the book and incorporate many of those same elements into the production. They faithfully tell the story of Captain Ahab’s obsession with finding and killing Moby-Dick, the great white whale who took his leg, and include the underlying themes of racial inequality and even environmental awareness. But faithfulness to the book doesn’t end there, and that’s where Malloy and Chavkin take the production into largely uncharted theatrical waters, emphasizing entertainment over linear storytelling in whale-sized chunks. Much of it works, but how well it works depends on your appetite for audience participation, juvenile humor and extended musical jams. 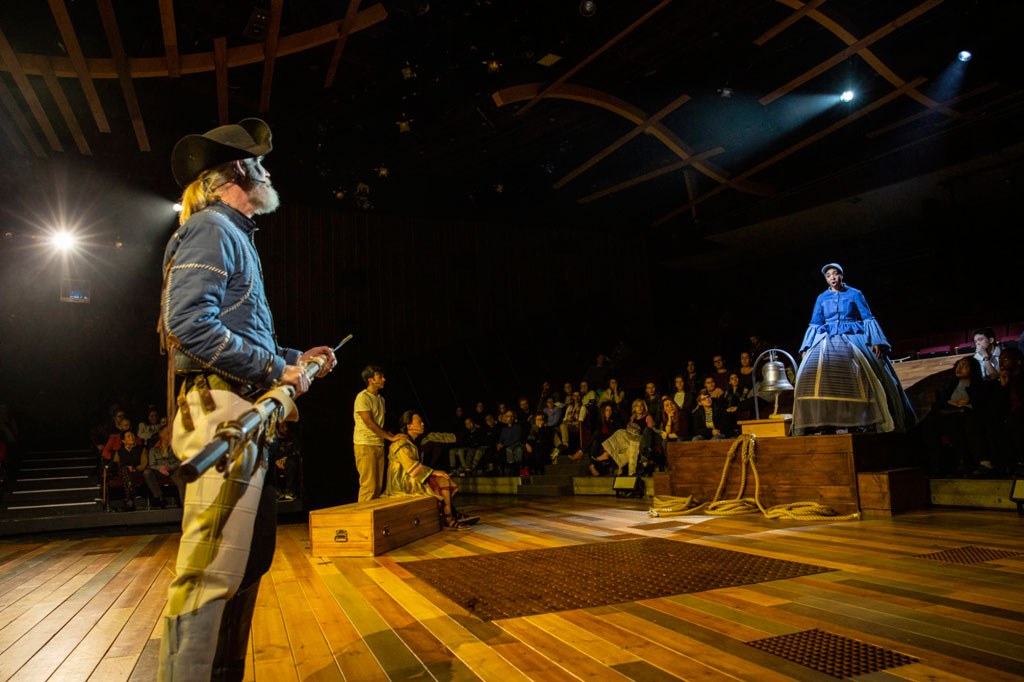 The production is broken into four parts, plus the prologue, and each is wildly different. The prologue is made up of a “Jonah and the Whale” sermon by Father Mapple (beautifully sung by Dawn L. Troupe, who is equally brilliant as various sea captains throughout) and the “etymology” of the production, delivered by a modern-day version of the plastic water bottle-toting Ishmael (Manik Choksi), the sole survivor of the ill-fated whaling ship and the narrator of the story. Part I introduces us to the principal players: Ahab (a disturbing and regal Tom Nelis), Ishmael, Queequeg (Andrew Cristi), his bunkmate and harpooner, cabin boy Pip (Morgan Siobhan Green) and the first mate of the Pequod, Starbuck (Starr Busby, in a magnificent performance), as well as the rest of the diverse crew of seafarers.

The first half of Part II is designed to be something of a vaudeville act, according to program notes, but at times I was reminded more of an episode of a Saturday morning kids show such as “Bozo the Clown” – only with talented adult performers. Following a five-minute break where volunteers from the audience don red rain parkas and are brought on as crew members for a whale hunt, there’s an educational segment set to music, “Cetology” (which could be titled, “Let’s learn about whales, kids!”), a cooking show, “The Whale as a Dish/Cutting In,” hosted by pipe-smoking second mate Stubb (a riveting Kalyn West), followed by a demonstration of what happens to the whale blubber; a socially conscious Dave Chappelle/Chris Rock-esque standup bit by Fedallah (Eric Berryman), the mystical Parsee harpooner smuggled aboard by Ahab; and a manual de-lumping of the coagulated “sperm” by the cast and audience members – set to a tune called, “A Squeeze of the Hand.”  Ba-da-bum. Tsss!

Similarly, the entirety of Part III is devoted to Pip, the black cabin boy who disconnects from reality after being left adrift at sea for an hour. The choreography and the music (which includes a section of what sounded like a white guy version of the late Gil Scott-Heron’s “The Revolution Will Not Be Televised”) starts off with an amazingly infectious energy, but goes on for a nearly interminable period. It flails, despite the efforts of the talented Green (who plays Pip with the heart-wrenching sensibility of an irretrievably broken child) and her shipmates.

While one can certainly admire Malloy and Chavkin’s willingness to take risks with the form, and the performances are entertaining and skillfully executed, I found myself wondering at times at the point of it all. Strangely, the piece seems to draw its creative inspiration from two very disparate Malloy works: Broadway hit “Natasha” and the fringier “Beowulf – A Thousand Years of Baggage,” the rock ’n’ roll retelling of another literary classic that Malloy composed in 2008 (it had a three-week run at Oberon in 2013). It was “Beowulf” for 12-year-old boys, played way over the top using cheap props – and it was a laugh riot. Conversely, while Natasha was as inventive as anything with even a chance of going to Broadway, from the staging to the music, it still pretty much colored within the lines.

When the material is played straight in “Moby-Dick” – as it is for Part I, the remainder of Part II following the vaudeville shenanigans, and all of Part IV – it is nothing short of brilliant. Watching Ahab lose all sense of proportion and humanity, and his unquestioning crew blindly following him, is an all-too-real reminder of our present political situation, and conjures up that same real sense of despair. But when Malloy and Chavkin take creative risks, it becomes more hit or miss, as if they’re throwing all of their imaginative ideas onstage without thinking of how they fit together. Although with the level of creative and onstage talent, it’s always at least interesting.

Malloy sometimes reminds me of Frank Zappa, who often infused his brilliant music with wildly funny lyrics and arrangements that seemed to be designed solely for laughs, as if to let us know we weren’t to take him too seriously as an artist.  Malloy is equally brilliant as a composer, and even if you don’t come out of the theater humming any tunes, there is rarely a point in his music where you’re not fully engaged. There’s also a lot of breaking of the fourth wall in “Moby-Dick,” much of it self-referential. This is particularly true during the Fedallah comedy routine, where he pokes fun at the inclusionary goals of theater companies that might be a little overly deliberate in their diversity casting (like the A.R.T. specifically, which he sarcastically congratulates on their “outstanding wokeness” with this production). It is a point richly driven home by the costuming of Queequeg, who is dressed in a tube top and fetching gold tutu for much of the production, presumably to blur the lines of gender identity.

You’ve got to admire Malloy and Chavkin’s commitment to pushing boundaries, and even with its flaws, there’s an awful lot to like about this production. Malloy really is a treasure as a composer, combining elements of Americana, gospel, jazz, vaudeville and Broadway, as well as modern-era composers. The work of choreographer Chanel DaSilva (who also performed that duty for last year’s astonishing “The Black Clown” at the A.R.T.) is extraordinary, and well-executed by the cast (which includes J.D. Mollison, Matt Kizer, Anna Ishida, Kim Blanck and Ashkon Davaron) – who sell every aspect of this show with unbounded enthusiasm. Alas, with out an extension of the run, any hopes of seeing this show in Cambridge may be deader than the brave crew of the Pequod. It’s sold out for the remainder of the existing run.