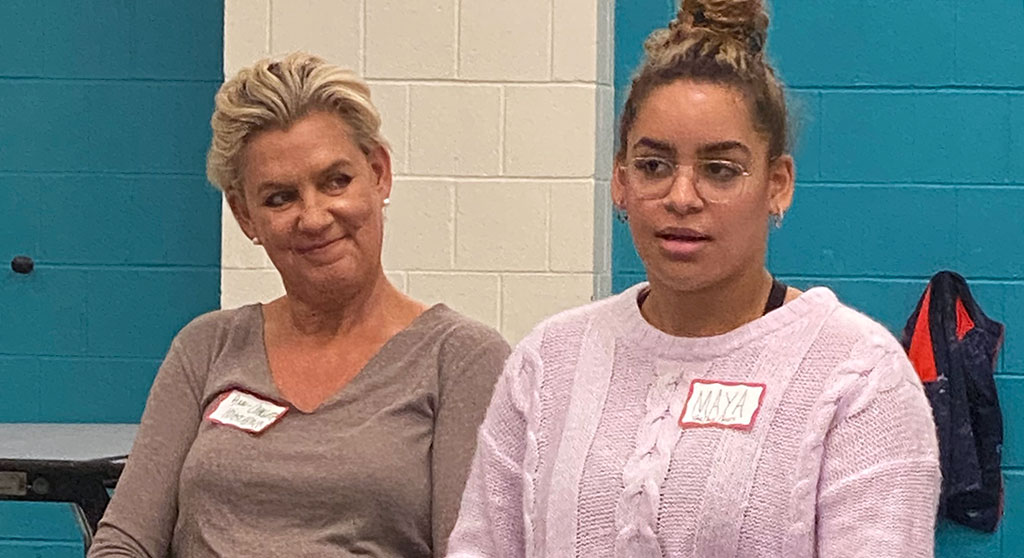 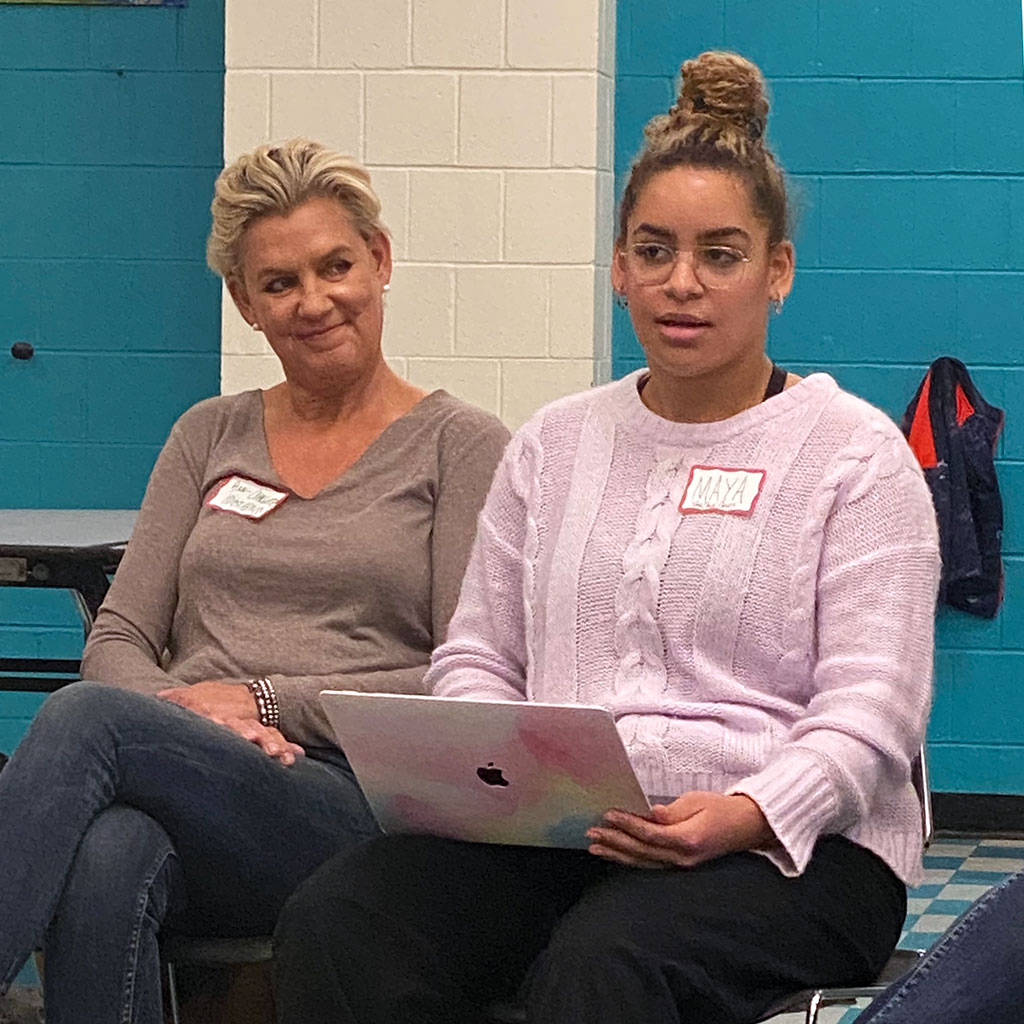 Cambridge Rindge and Latin School senior Maya Counter, right, leads a discussion Tuesday about changing the name of the Agassiz neighborhood. With her is Ann Charlotte Hogstadius, her mother. (Photo: Tom Meek)

A name change for the Agassiz neighborhood won unanimous approval this week at a community meeting, with the caveat by several voters that more conversation is needed.

The proposal to change the name to the “Baldwin neighborhood” comes from Maya Counter, a resident of the neighborhood and co-president of the Black Student Union at Cambridge Rindge and Latin School. But it’s not new – Counter, a senior, came upon the idea her sophomore year while researching a history class project and learning of the “flawed science and racist beliefs” of namesake Louis Agassiz.

It’s also not an idea new to the neighborhood. In 2002, a School Committee vote renamed the Agassiz School on Oxford Street to address the same discomfort; addressing the neighborhood name might have followed, according to people active in neighborhood politics at the time, had not many of the students and parents who pushed for the change felt burned out by the effort. 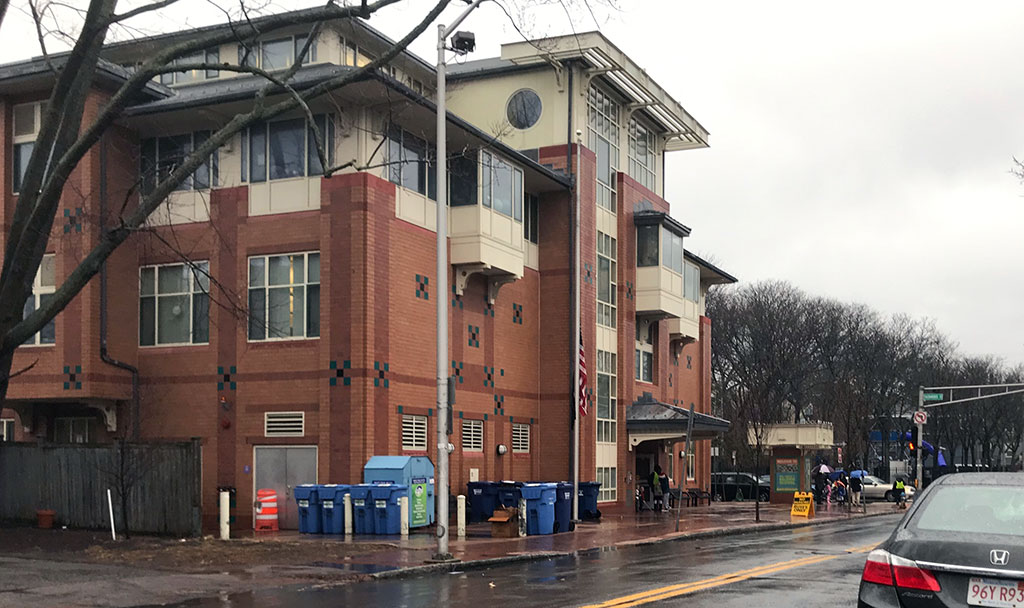 The neighborhood’s Maria L. Baldwin School was known as the Agassiz School until 2002. (Photo: Marc Levy)

There was little disagreement Tuesday about Agassiz and the context of his legacy. The Swiss-born scientist who lived from 1807 to 1873 was famous for founding Harvard’s Museum of Comparative Zoology, but controversial for pushing racially divisive theories as science. He believed in polygenism, the idea that human races are of different origins, and that whites were intellectually superior to other races. He has been discredited for his racism, and his belief in creationism lost out to the evolutionary theories of contemporary Charles Darwin.

His name was taken off the local elementary school in honor of Maria Baldwin, who in 1899 became the first black female school principal in the Northeast – “the most distinguished position achieved by a person of negro descent in the teaching world of America,” W.E.B. Du Bois said in 1917.

It was at the school that the Agassiz Neighborhood Council met Tuesday to give Counter the “constructive conversation” she requested, and a positive reaction by the approximately 30 neighborhood residents and staff in attendance. 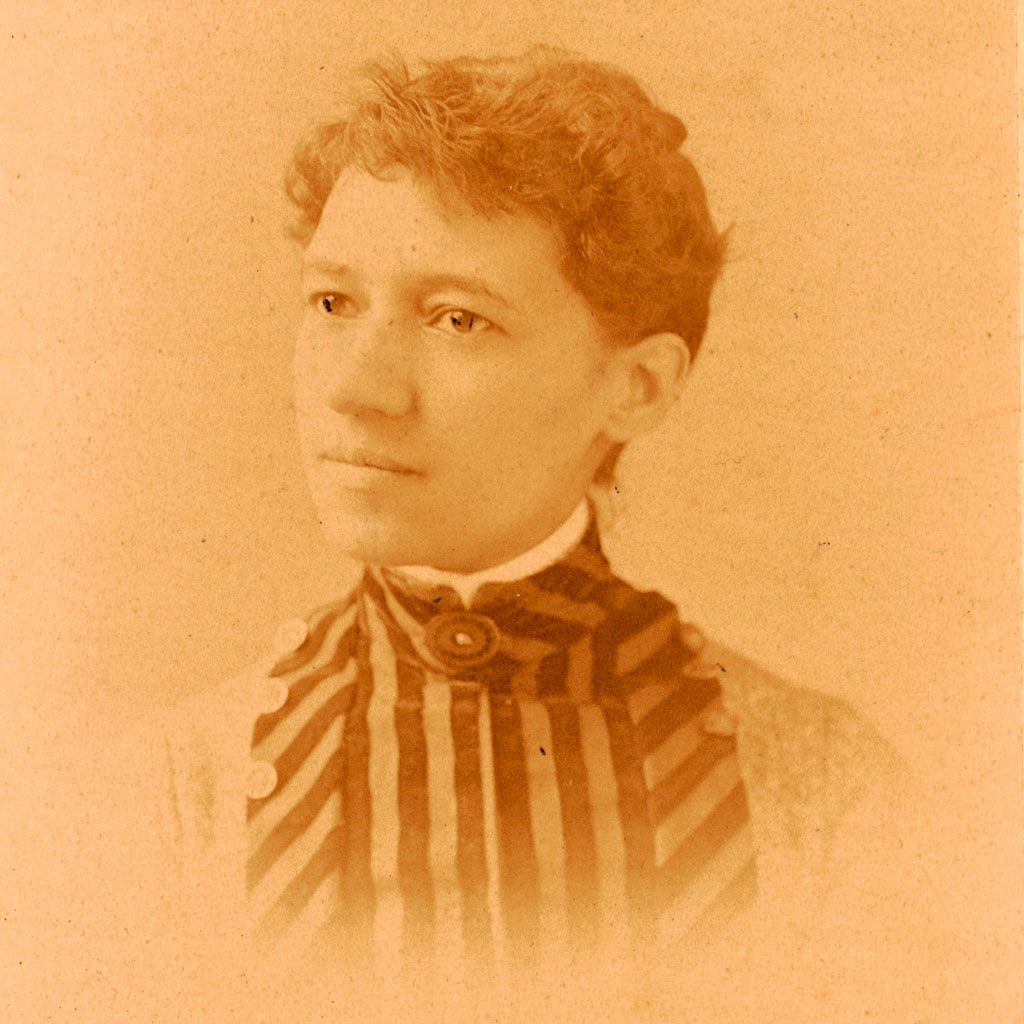 But there were concerns about process after Counter announced she had reached out to Mayor Sumbul Siddiqui and planned to present to the City Council at month’s end.

Many at the ANC meeting expressed a strong desire to be involved in the process and felt that one meeting in a neighborhood of approximately 6,000 residents – with only two dozen in attendance – was not enough. (To prepare for the meeting, Counter posted about the idea on the neighborhood social media site Nextdoor. As at the meeting, there was strong support for a name change, though also some challenges that “you can’t erase the past.”) Some people at the meeting were concerned that Counter was rushing to get the change done before graduation.

Some also floated the notion that perhaps the neighborhood was named after Agassiz’s wife, Elizabeth Cabot, a naturalist and the founder of Radcliffe College, and therefore the name might still be applicable. But correspondence from Charles Sullivan, executive director of the Cambridge Historical Commission, stated, “The Agassiz neighborhood was named after the Agassiz School, which is now the Baldwin School.”

Renaming a neighborhood lacks a clear-cut process, despite the recent change of Area IV to “The Port.” There too, race played a role, as residents believed the term “Area IV” was a police designation (it was created by the city facilitate analysis of the then upcoming 1940 U.S. Census). The change was made official by a City Council vote in 2015 after several rounds of community solicitation. In that situation too, not everyone felt the process had been inclusive enough, said Lee Farris, a resident of The Port who is active in civic affairs.

The Agassiz change may be simpler. A policy order by city councillor E. Denise Simmons approved unanimously in April asks the city to review the names of streets, schools and public buildings “that may be named in honor of those who have ties to the American slave trade” and work on renaming them “as soon as possible.” Agassiz, while not a slave owner and on record as an abolitionist, could be linked to slavery for espousing the beliefs that enabled it.

There is already some eagerness for a name change among the hosts of the Tuesday meeting.

In 2007 the nonprofit that provides after-school services, runs the Maud Morgan Arts Center, hosts the Agassiz Neighborhood Council meetings and provides other community services, was rebranded the Agassiz Baldwin Community – a half-measure that doesn’t sit well with Counter. “Why keep it?” she said in an interview before the meeting, referring to the “Agassiz” part of the name. “He thought she was biologically inferior. It’s disrespectful to her.”

At the meeting, the nonprofit’s executive director, Maria La Page, agreed that having the name “Agassiz” upfront was a burden for an organization that holds inclusion at its core.

The Agassiz neighborhood is between Harvard and Porter squares and touches on Somerville, defined by Massachusetts Avenue to the west and Kirkland Street to the south.