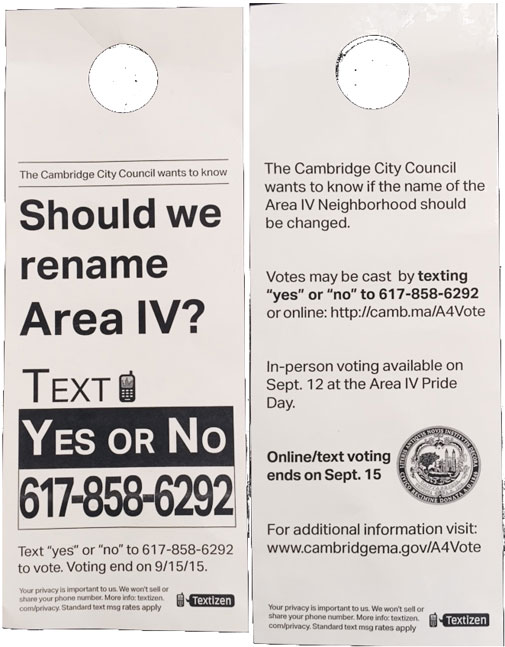 These fliers, put on doorknobs in Area IV, were part of city efforts toward a vote on a name change for the neighborhood. (Image: Ilan Levy)

Area IV, the neighborhood next to Cambridgeport formerly known as The Old Port or The Port, will now again be known as The Port. Got it?

The City Council voted 8-1 on Monday to ratify the name change, driven by a series of neighborhood efforts dating back to 2002 and endorsed by a nonbinding, five-day survey that took place in September. In that process, a total 713 people responded to the question of whether Area IV should be renamed, with 52 percent saying yes (rising to 55 percent if only Area IV residents were counted).

Of the 369 people who wanted a name change, 78 percent wanted either “The Port” or “Old Port” (rising to 85 percent if only Area IV residents were counted).

The final choice of name between the two popular choices fell to the council, led by vice mayor Dennis Benzan and councillor E. Denise Simmons.

History of a name

Area IV had been part of a single neighborhood stretching south to the Charles River, but in the 1940s the city created 13 overlaid designations to help make analysis of an upcoming U.S. Census easier, according to a January 2004 article in the 4Word, a neighborhood newsletter, written by resident Gerald Bergman as a summary of a meeting the previous year with Charles Sullivan, executive director of the Cambridge Historical Commission.

Over the years, Area IV grew into a neighborhood apart from Cambridgeport and the origins of the term became obscured. Instead of being recognized as a planning term used by the city, neighborhood and police, some just called it a police term. Simmons herself has complained that “Area IV is one of only two neighborhoods in the city of Cambridge that is known by its police district number,” as have longtime residents such as Selvin Chambers.

The next step was to make sure that city changed official documents to reflect the change, said Benzan, a lifelong resident of the neighborhood.

In August, as Benzan raised the issue of a name change anew after an attempt in January 2013 attempt, Simmons said a previous vote on a name change to The Port had failed, making Benzan’s move for a vote “difficult.”

Simmons and other residents, including Renae Gray, a Columbia Street resident, activist for social justice and one-time council candidate, and Julian Cassa, a member of the local neighborhood coalition’s leadership committee, were asked for details of those previous votes, but none responded.

Theories that only older, longtime residents might care about being known as The Port, and that any perceived stigma attached to the Area IV name would fade generationally, could be considered overturned by the results of the voting last month. A majority of the votes came by text message, and 40 percent of respondents identified themselves as being 18 to 34 years old – the largest age bloc by 15 percentage points, followed by those identifying themselves as being between the ages of 35 and 50.

Looking ahead to the possibility the change would happen, Krupp said he suspected residents would keep on calling the neighborhood “Area IV” anyway – just as some die-hard residents kept calling it The Port despite it being officially Area IV for more than five decades.