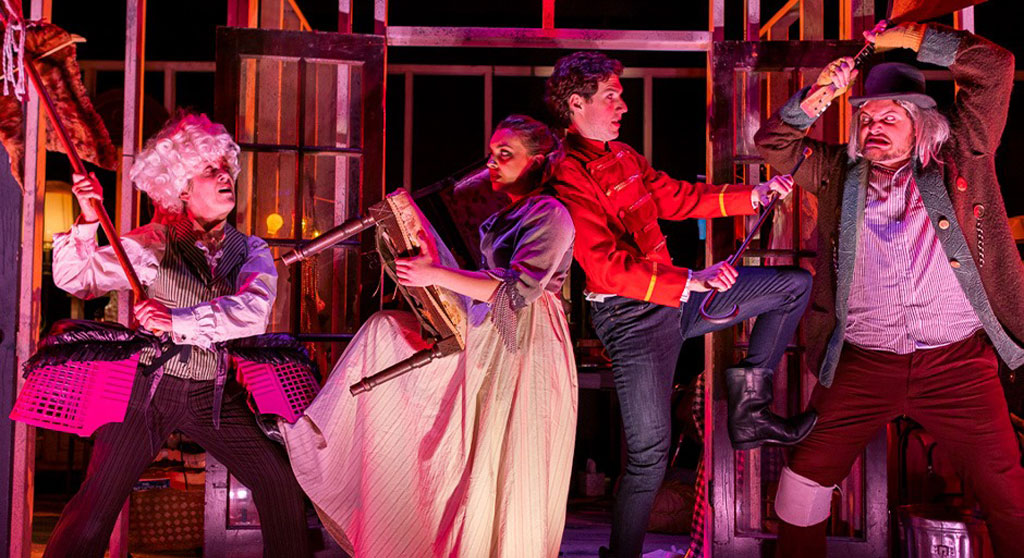 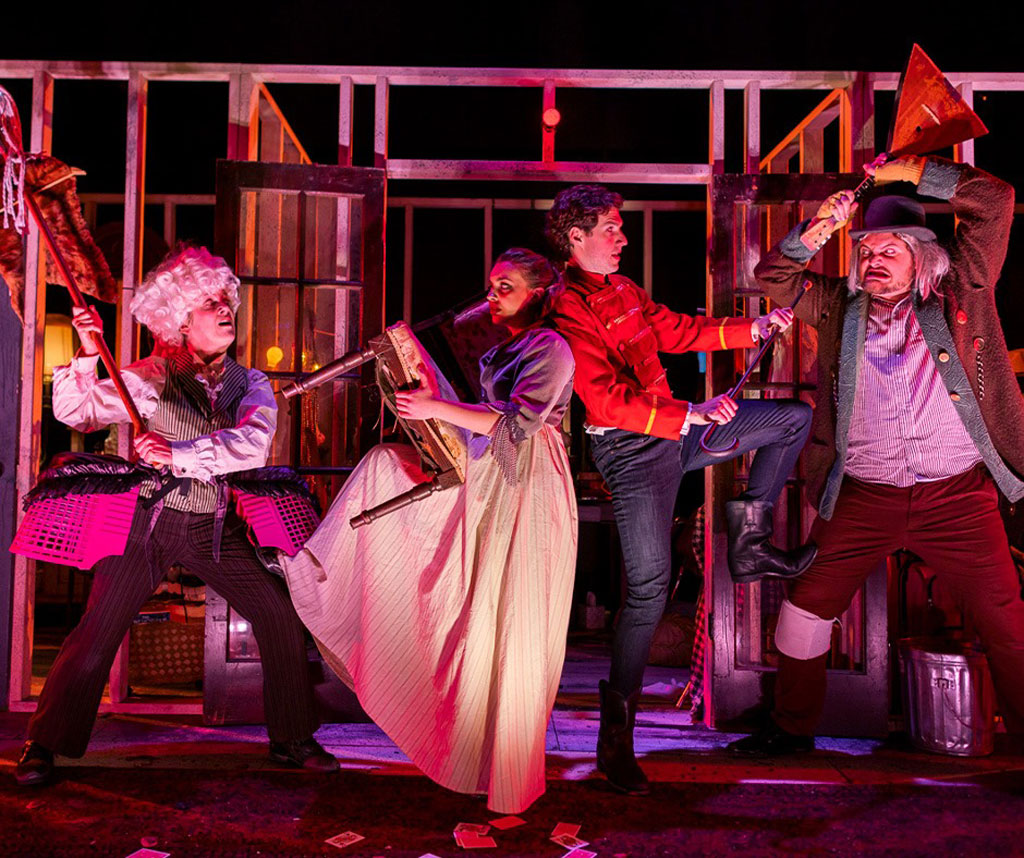 The cast of the Underground Railway Theater’s “Vanity Fair” at the Central Square Theatre.

William Makepeace Thackeray’s “Vanity Fair” was first published in 1847 as a 19-volume serial novel released in monthly installments for Punch, a British magazine known for its satirical content. The 800-page work was published in a single volume in 1848 with the subtitle “A Novel Without a Hero.” Arguably Thackeray’s most successful and enduring work, “Vanity Fair” has been adapted into radio broadcasts, silent and sound films, television series, and plays.

One of the more recent stage adaptations was written by acclaimed playwright Kate Hamill, who has an affinity for adapting literary works into plays – including Jane Austen’s “Sense and Sensibility,” “Pride and Prejudice” and “Mansfield Park,” as well as Louisa May Alcott’s “Little Women” and the forthcoming adaptation of Bram Stoker’s “Dracula” (as feminist revenge fantasy), among others. Like her other works, Hamill’s “Vanity Fair” (an im-morality play) is strikingly original but respectfully loyal to its source, offering audiences an unapologetically feminist perspective of early 19th century Britain. 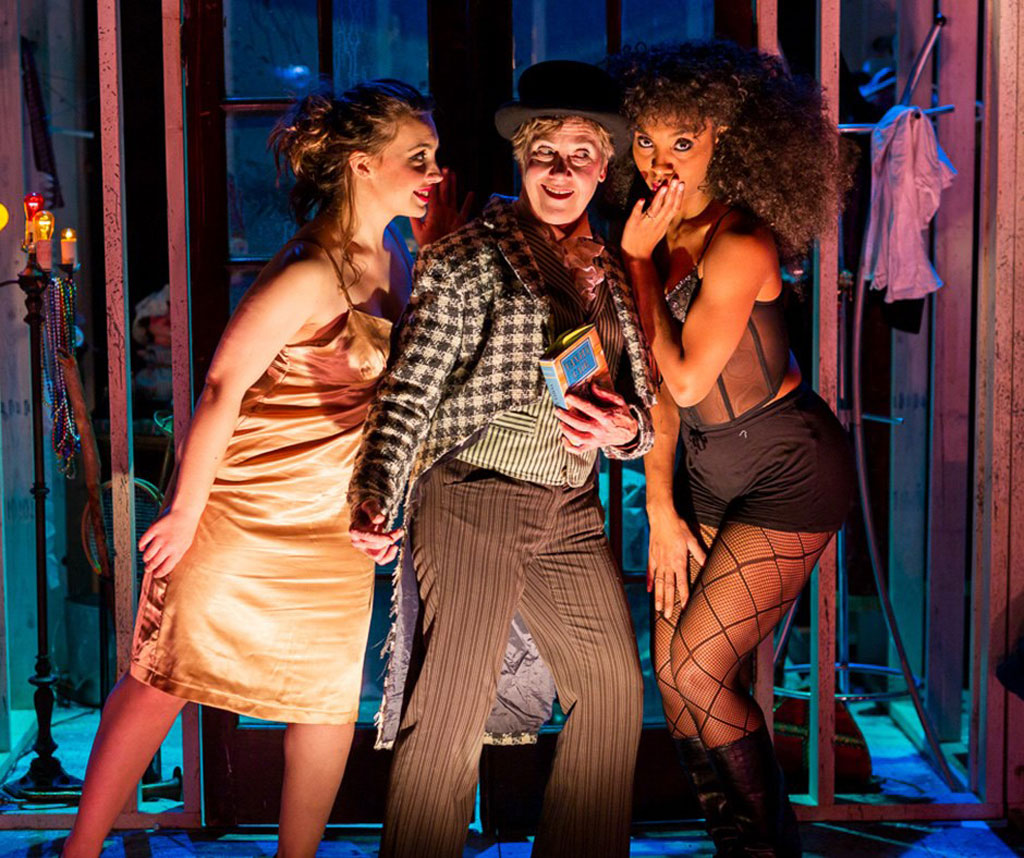 Hamill’s “Vanity Fair” centers on the sharp-tongued Becky Sharp (a penniless orphan of low birth who fervently climbs the social ladder) and the warm-hearted Amelia Sedley (a woman born into wealth and naive to the ways of the world). The play follows the difficult journeys of the women from their sister-like beginning to their social separation, through their unhappy marriages and personal losses, to their compassionate reunion after both have struggled under the weight of relentless bad luck in a sexist, male-dominated society. But because this is a Kate Hamill play, this seemingly serious tale is told, from the first moment to the last, with biting humor and exceptional wit.

It takes a brave company to tackle a play such as this. Fortunately, Underground Railway Theater has risen to the occasion. Its production, directed boldly by David R. Gammons, moves at lightning speed (despite the nearly three-hour run time). While Gammons uses clever, clownish staging to keep the audience entertained, his major achievement is his scenic design. Picture a west-to-east elevated “catwalk” with seven individual yet eternally connected rooms; with naked post-and-beam walls, there is no privacy and the characters can spy on one another easily or sneak into each other’s rooms (which they frequently do). Each room is stuffed with dozens of “vanity” objects such as mirrors, masks, clothes, jewelry, wigs, a television, a chandelier, curtains and flowers. The design is so detailed that each room even has its own unique door, and above each door is a light bulb specific to each major role in the play. For example: Above Amelia’s door is a clear white bulb that emphasizes her innocence and gentility, while the one above Becky’s door is pink, reflecting her flashy flirtatious nature. The seven-person cast is a rollicking rabble of characters, led by theater artistic director Debra Wise. As the Manager, Wise acts as a kind of narrator offering bits of advice to her fellow players and short explanatory quips to the audience; setting up scenes by bringing in a table or holding a lamp; listening from her “office” center stage where she follows along with the story by flipping through a copy of Thackeray’s novel. Wise brings nerve-tingling confidence to the role of the deceitful, smarmy Lord Styene and a delightful raunchiness to the role of old lady Matilda Crawley. She is the bedrock of this production.

“Vanity Fair” tells the story of two young women who are thrown into a mad, unforgiving world full of scoundrels, villains and thieves; people who are selfish, jealous, money-grubbing and power-hungry – a world not so different from our own. When the Manager asks, “Aren’t we always in want? If nothing is ever enough, then why fight it?” the characters simply keep moving forward, as we all must do, with or without our morals intact.