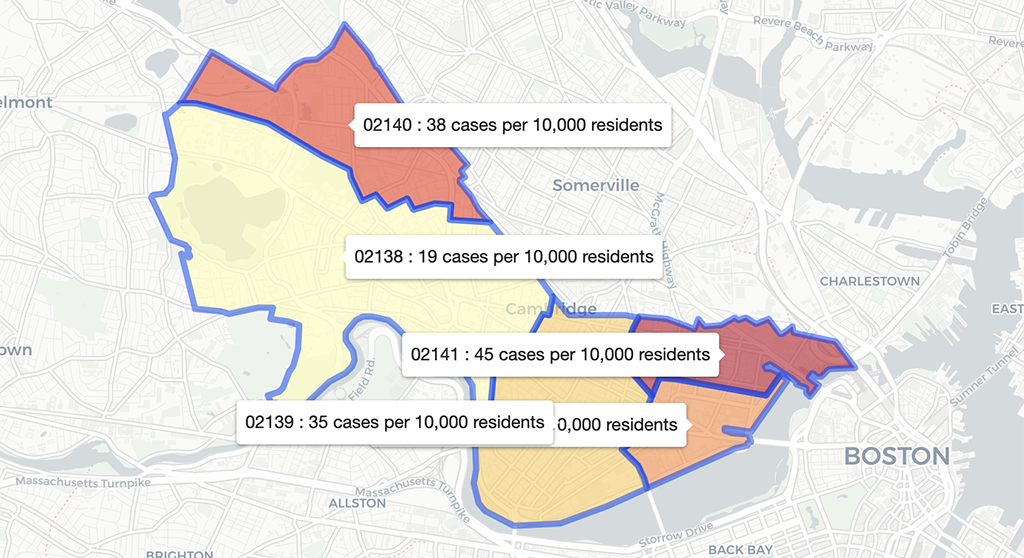 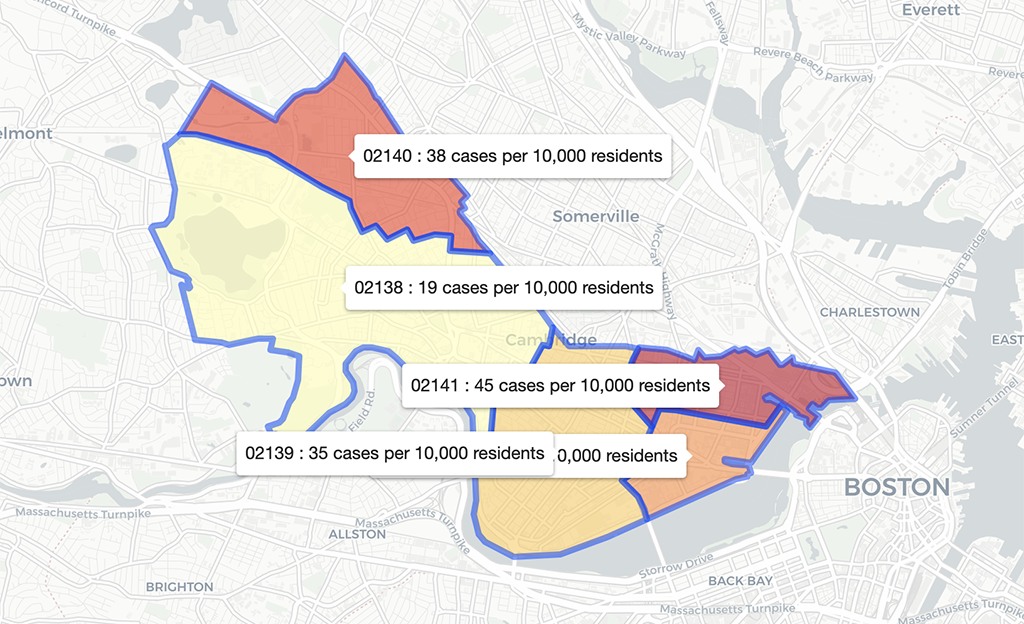 An analysis by the Cambridge Public Health Department shows a concentration of known coronavirus infection in East Cambridge.

East Cambridge has the highest rate of Covid-19 infections in the city by far, according to an analysis by the Cambridge Public Health Department. So far, no public health official has suggested a reason.

The department began mapping infections by ZIP code on Tuesday and posted the information in the city’s Covid-19 data center. Users can choose to compare ZIP codes by the number of cases of coronavirus, or by the “normalized case count,” or infections per 10,000 population – a more useful indication of how hard Covid-19 has hit an area.

East Cambridge does not have the highest number of cases, but its infection rate stands out: The color-coded map of cases per 10,000 depicts ZIP code 02141 – including part of the Wellington-Harrington neighborhood – in deep vermillion, the only area that dark. On Friday, there were 45 cases per 10,000 residents.

“I strongly believe that more analysis of the data is necessary to see why the East Cambridge infection rate is so high,” said Charles Hinds, president of the East Cambridge Planning Team neighborhood organization, which he called one of the first to cancel its public meetings for fear of spreading infection – a move that he said drew criticism when made back in March.

He suggested some possible areas to examine: the number of older people in the neighborhood, the use of ride sharing and public transportation, the fact that “East Cambridge is an international hub for high-tech and biotech researchers.”

The health department might be able to trace infections in the neighborhood “back to its source,” Hinds said. “I’m not trying to find blame, but we need to understand why the rate is high to make changes to mitigate the next pandemic.”

East Cambridge “is one of the densest areas in the country and getting denser each year. Special attention to public health needs to be of paramount concern,” he said.

The health department was asked Thursday for its response to its data showing the high rate in East Cambridge. Spokeswoman Susan Feinberg said the department was preparing an answer; none arrived by Friday evening.

U.S. Census data show that the ZIP code, which does not include the area near Kendall Square and its luxury housing, has the highest percentage of residents living in poverty. But the census figures are estimates and may not include information from relatively new housing in Cambridge Crossing, the emerging neighborhood formerly known as NorthPoint.

This post was updated April 24, 2020, to note that the East Cambridge ZIP code includes part of the Wellington-Harrington neighborhood.