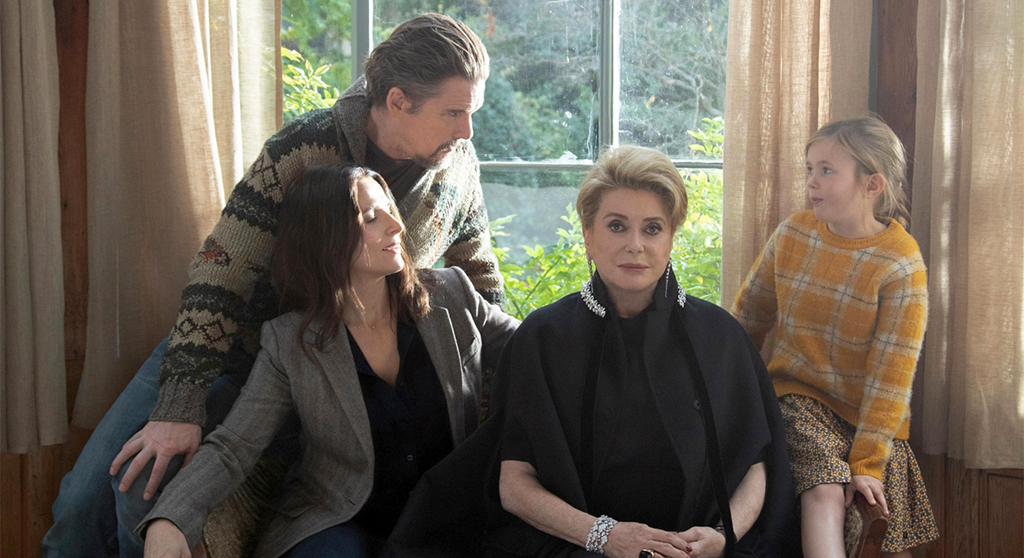 Who knew that for his follow-up to “Shoplifters” (2018), a darkly riveting curio about a family of petty criminals, Japanese filmmaker Hirokazu Koreeda would make an emotionally tumultuous French melodrama that feels like a revisit of Olivier Assayas’ “Summer Hours” (2008) while being wholly original. Besides the setting, both films are driven by the doe-eyed intensity of Juliette Binoche and wrestle with family reckonings. In “The Truth,” the one prominently in the catbird seat is Fabienne Dangeville, a legendary, César-winning French actress in her 70s played by Catherine Deneuve, a legendary French actress in her 70s – it’s priceless to witness Fabienne bristle at the mere mention of Brigitte Bardot. Binoche plays her daughter, Lumir, a screenwriter who has come home for a visit with her American husband Hank (Ethan Hawke), a struggling TV actor, and their precocious 8-year-old daughter, Charlotte (Clémentine Grenier).

It takes a little while for mother-daughter barbs to abrade the reunion serenity, and for Hank and Lumir’s marriage to show its frayed edges (“You said you had stopped drinking!”) from behind boho photo-op posturing. Filling the fore until then is a giant tortoise named Pierre who patrols the garden and the sci-fi film Fabienne is working on, playing the daughter of a mother (Manon Clavel) who never ages and looks like a young French film starlet from the ’60s next to Fabienne’s septuagenarian.“The Truth” is sly in its meta, tongue-in-cheek deconstructive approach. The main rubs come through Fabienne’s newly released memoir, with details that lead Lumir to declare on a few occasions “that never happened,” and Fabienne’s aloof, blasé diva complex, which conceals loneliness and lack of real human connection. In one scene where she has an emotional epiphany with Lumir, as the tears have barely dried she proclaims she wished she had saved it for the screen. Is she about her art, her family or her legacy?

The amazing thing here in is Koreeda’s comfort sliding into a très French film. Don’t get me wrong, the plumb of inner desire and personal agonies is not far off from “Shoplifters” or Koreeda’s brilliant 2004 kids-living-alone drama “Nobody Knows,” but this feels like hitting the ice for the first time and never having even the semblance of a wobble. The film, which Koreeda co-wrote, is primarily in French; Hank can barely speak a lick of it but is trying constantly to be at the center of conversations he has little inkling about, which could be seen as some kind of comment about the arrogance Americans drag to the party no matter where they go. The end of “The Truth,” however, is not about big statements, but reaching understanding. It’s quiet, wistful and from the heart.