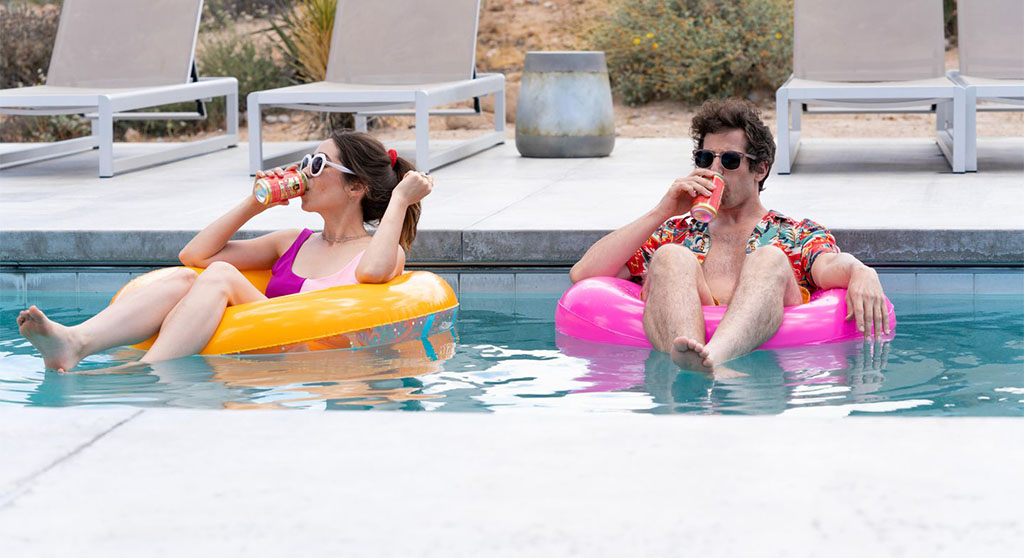 “Palm Springs” is an obvious – purposeful, even – descendent of Bill Murray’s classic “Groundhog Day” (1993), but with two protagonists stuck in a time loop. Despite the shared genetics of having an endlessly repeating day, “Palm Springs” is very much its own entity, and Max Barbakow’s debut film is one of the year’s best. It’s cunning and nihilistic, romantic and hilarious, and morbid in a way that cuts perfectly against the summertime cotton candy hues the film basks in. Made up of contradicting bits, of square pegs in round holes, it manages to work because of a clever script and central performances by Andy Samberg and Cristin Milioti that anchor the film when it begins to race beyond its boundaries.

In a bold move, “Palm Springs” forgoes excessive exposition, dropping us right into Nyles’ (Samberg) hell: He’s already spent so much time reliving the same day that he’s begun to forget what life was like before it. In this particularly cruel purgatory, he has to spend time with a girlfriend he knows is cheating on him and a wedding party consisting entirely of strangers on the eve of the nuptials. The film declares itself different when it introduces Milioti’s Sarah. Cynical and harboring her own emotional demons, she’s inserted into the loop after following Nyles into the desert after a botched one-night stand. The two enduring the agony of repetitive mundanity together gives the film its greatest moments.

The writing by Andy Siara (“Lodge 49”) is whip-smart in subverting tropes and expectations. Nyles, due to Samberg’s particular brand of comedy, is as much a man-child as he is weighted down by a mature play on the dread of loneliness; he’s less worried about getting out of the time loop than with being left alone once again. This attitude is contrasted against Sarah’s willful cynicism and scrappy survival instincts. She’s practical and, while Sarah and Nyles do allow themselves many do-overs to enjoy themselves and their bizarre situation, determined to get back to the regular timeline.

The writing comes alive in Samberg and Milioti, whose chemistry and Cheshire grins toe the line between charming and manic depending on the mood of their characters that cycle. They – along with J.K. Simmons (playing an extended family member who also one night gets roped into the nightmare) – bring pathos to moments of high-wire comedy and humor to even the lowest lows. Simmons in particular is gifted a moment of clarity extolling some grace notes on getting to live a day over and over that is delivered so it only somewhat reads as the character fooling himself.

Barbakow and cinematographer Quyen Tran create a landscape in “Palm Springs” that is as oppressive as it is vast, with scenes of the sun scorching the desert earth that illuminate the isolation of the leads, removed from society despite living with a group of people day in and day out. They also provide moments of odd beauty, such as when Nyles and Sarah, high on mushrooms, sit back and stare at the star-filled sky. Barbakow and Tran are there to make sure we feel the impact of the moment and its punch-drunk tranquillity. “Palm Springs” is hilarious because it sees the light in the dark but doesn’t shy away from the latter, running fast at it and dragging with it any laughs it can grab hold of along the way.

“Palm Springs” would have been a success no matter when it was released – and was, considering its record-breaking Sundance sale (Hulu and Neon reportedly paid $17.5 million). But the feeling of impending claustrophobia from forced daily repetition and the hopeless “the hell with it” mindset that comes with it certainly can’t feel too far out there for many of us right now. Intelligent enough to not forget its influences while confidently refreshing a familiar story, the film offers a deranged sort of comfort in seeing people react to an imaginably absurd situation. It carries a realistic level of fear that gives way to noncommittal apathy and, finally, gutsy determination. It delivers on laughs from start to finish, with Barbakow, Siara & Co. crafting a film that’s as eerily of the times as it is timeless.