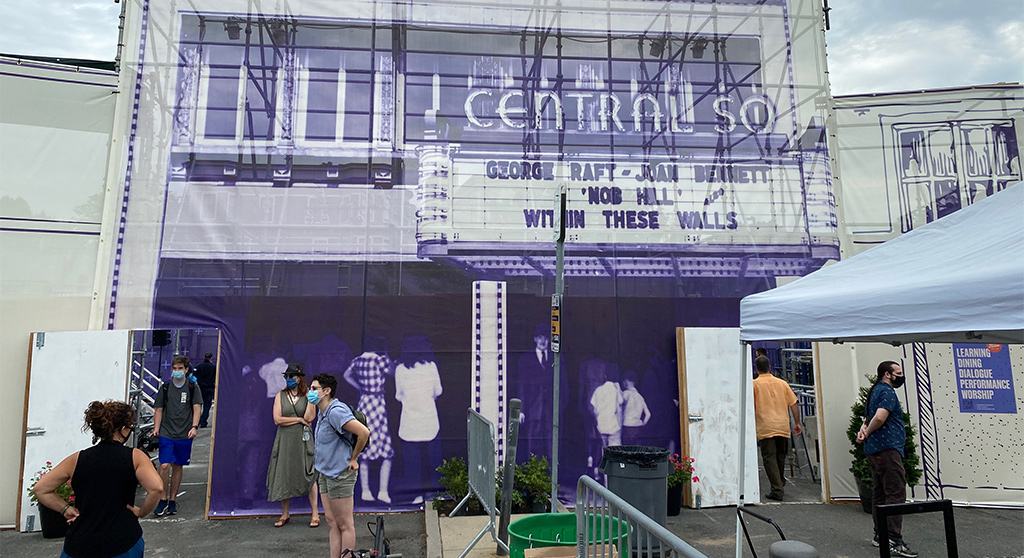 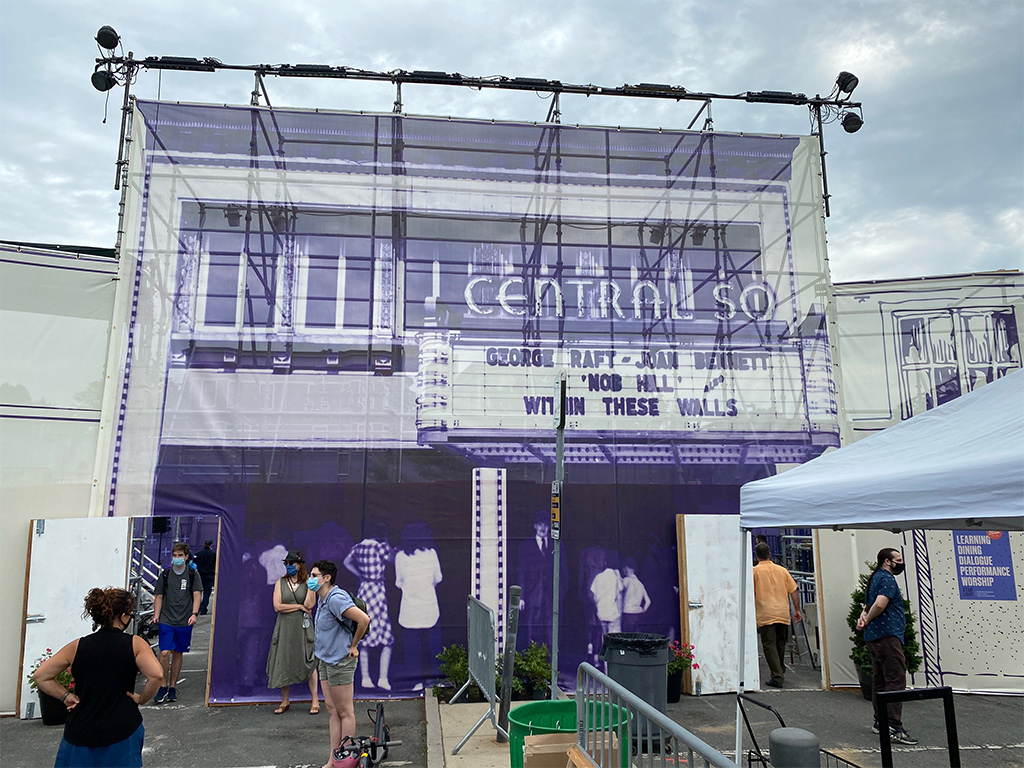 The wrap around Starlight Square’s theater Friday shows the theater that was on the space 75 years ago. (Photo: Marc Levy)

Starlight Square, which includes an outdoor entertainment stage, courtyard for dining and community area, got a welcoming ceremony Friday for its expected Wednesday opening date, with a peek at what’s coming in terms of theater, dance and comedy for its existence through October.

The Friday ceremony – in which the ribbon being cut was yellow construction-area caution tape – drew a socially distanced crowd of city officials, community and cultural leaders and friends and family, entertained by the jazz of the youthful Lenny’s Funk Club until a brief series of speeches that applauded the work so far and looked ahead.

“What our community partners do inside of this space over the next 12 weeks will be absolutely magnificent,” said Michael Monestime, executive director of the Central Square Business Improvement District, who organized the space as a response to the coronavirus lockdown keeping audiences from gathering for indoor shows. “Within these walls, there will be great performances, the best that our cultural district has to offer. Within these walls, there will be healing, joy and safe shared experiences that will help folks deal with all of the uneasiness that’s been going on since March.” 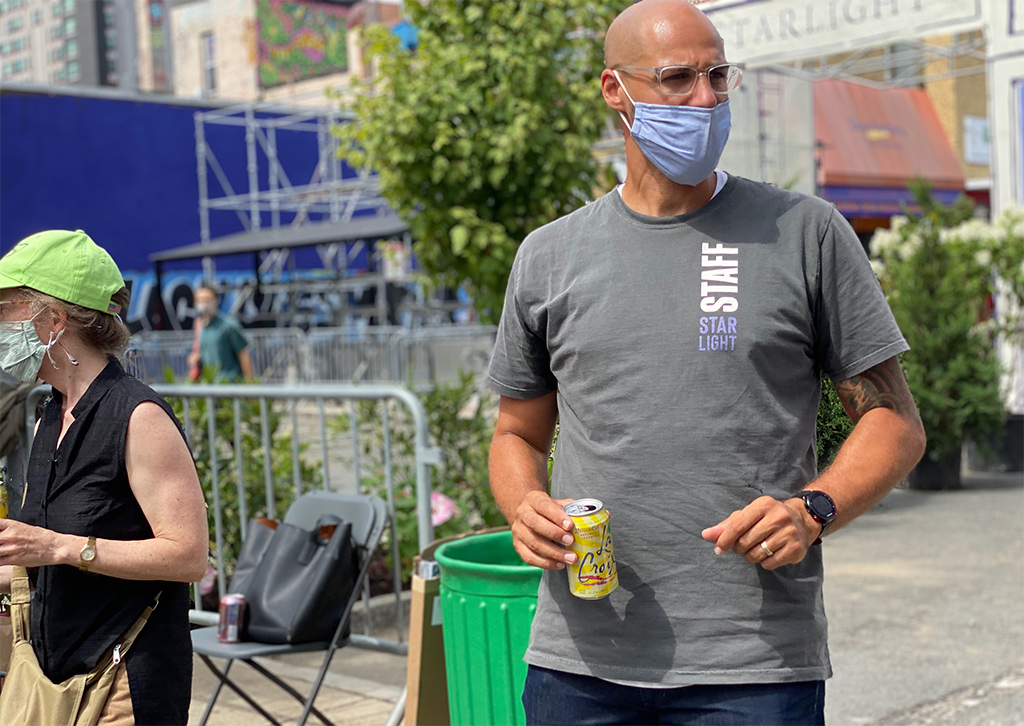 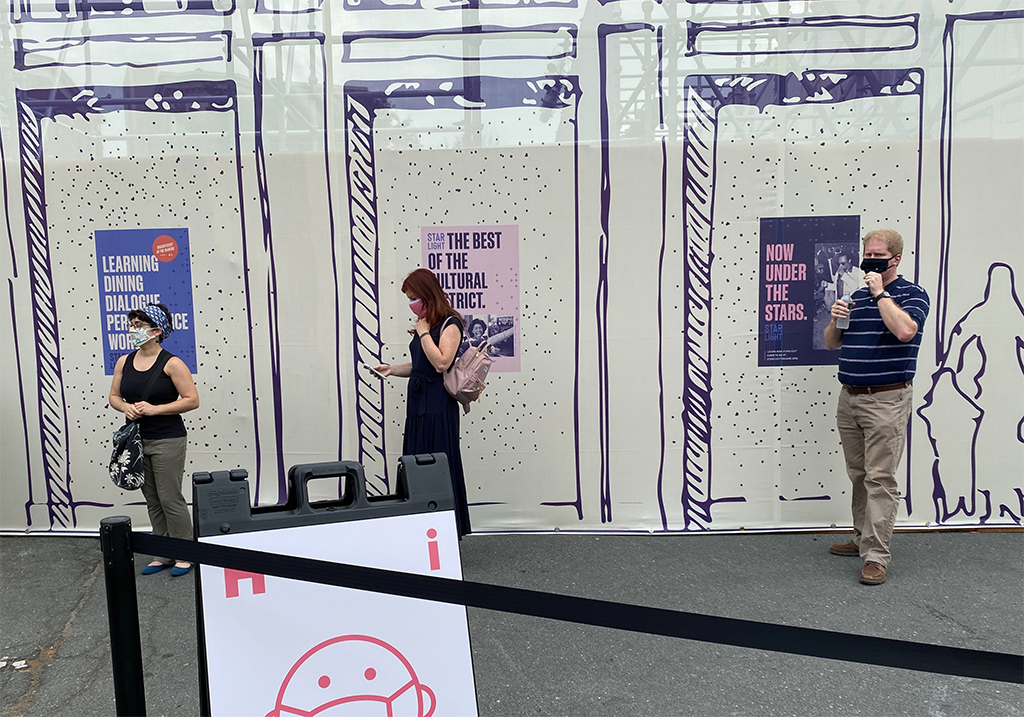 Starlight Square will be open seven days a week, adding a farmers market each Monday. A full schedule and ticketing system is due to go live Saturday at starlightsquare.org – to avoid overfilling the theater, all tickets have to be secured ahead of time. A system for physical tickets is being arranged for people who aren’t able to get online easily, Monestime said Friday.

Cambridge residents can get into all events free, subsidized by the city, vice mayor Alanna Mallon had previously announced.

The stage is the key component of Starlight, and three Central Square arts organizations who were partners in creating it gave a look at what residents can expect to see from them. 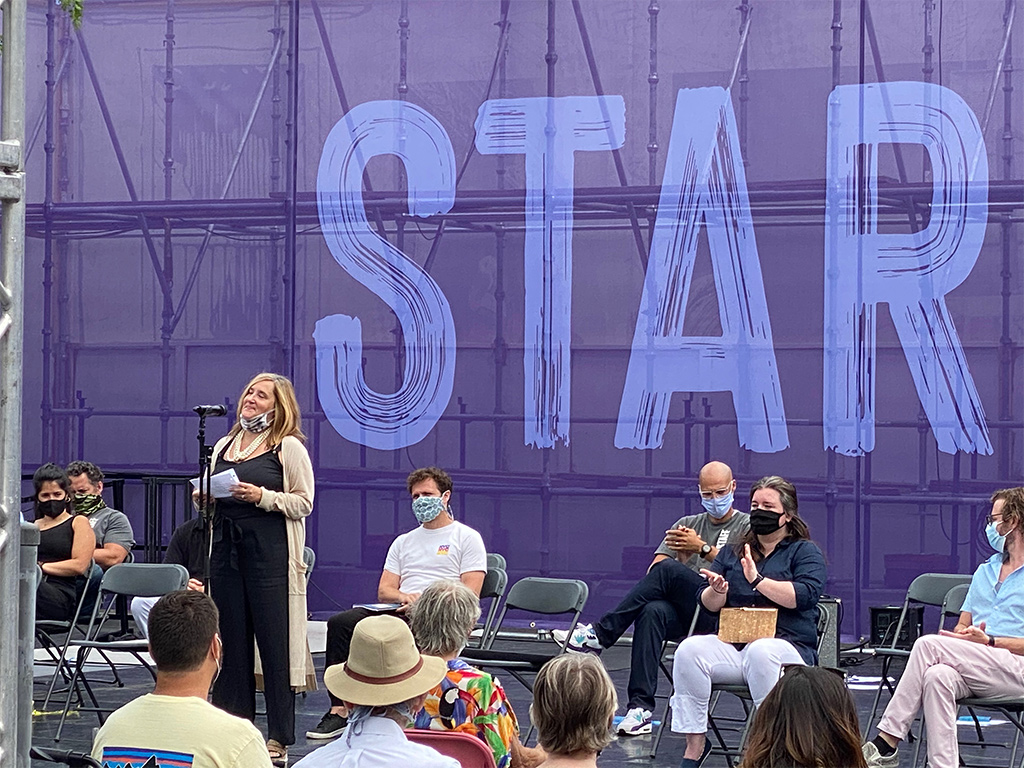 Central Square Theater plans to start Thursday and Friday with Sarah Nolen’s “Judy Punches Back,” which takes a feminist look at “Punch and Judy” puppet shows in which which Punch has been beating Judy, and engaging in other violent acts, for some 400 years. Other theater projects will include the theater’s Youth Underground and its Act Up & Vote! project creating works from Cambridge oral histories, said Catherine Carr Kelly, executive director of the institution. Also planned: theater that will “honor the past, exploring the legacy of Thurgood Marshall, the first black supreme court justice, and celebrate the great Nina Simone and her lasting impact on hip-hop.”

“We believe that live performance can inspire, change and expand perspectives and reveal the courage of our humanity. In the time of Covid, I can think of no better way to create hope and encourage us to be our best selves than through the community that is built with meters of scaffolding, yards of scrim and dozens of folding chairs – and the scores of artists eager to offer shared experiences,” Kelly said. 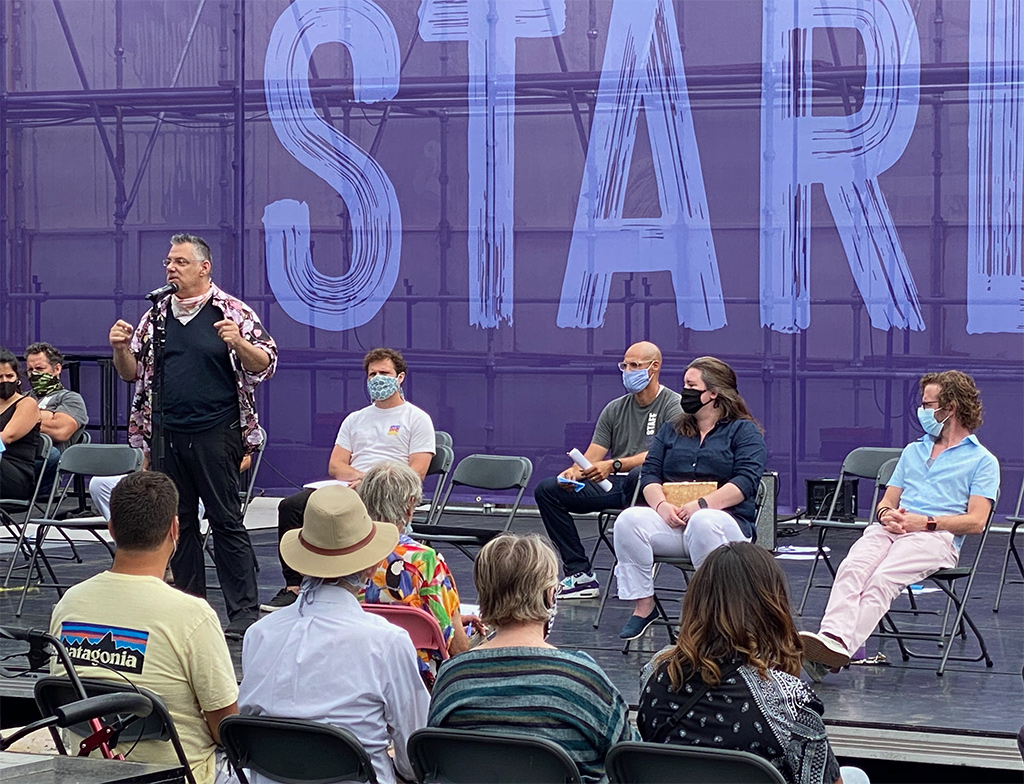 The Dance Complex has 17 nights of performances planned, co-curated in an organizational first with Black Dance Boston, Racines Black Dance Festival and local educators such as Harvard’s Aysha Upchurch. The planned works will help “illuminate some of what the country’s been experiencing for the past 400 years, and since George Floyd,” said Peter DiMuro, executive artistic director of the dance organization. A highlight of its Starlight season: a night including 25 dances, some of them as short as 60 seconds. “They will be over before you don’t like them anymore,” DiMuro quipped.

Other shows will demonstrate the range of dance, from the funny cabaret of The Davis Sisters (“He’s gay, she’s understanding,” DiMuro explains) to “Black,” a work dealing with themes of death and social justice commissioned by the Dance Complex years ago for the Wondertwins, Billy and Bobby McClain, but rarely performed since. Callie Chapman’s [email protected] dance organization is also scheduled for a night at Starlight, he said.

“We’re super excited. It’s great to have a place to do shows,” said Garneau, whose performance space is shuttered until 2021. “I’d live in this place if I could.”

Some of that feeling was evident to Monestime back on June 30, when he offered a look at the bones of Starlight as it came together. “I have not seen people buzz with excitement like this since I’ve been here,” he said. 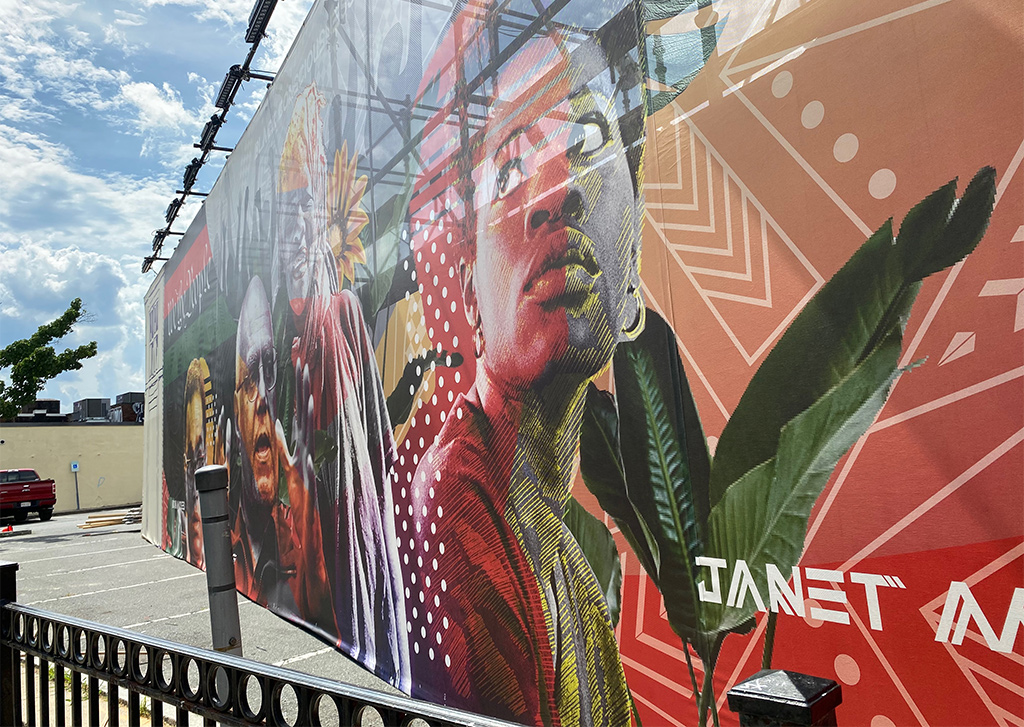 One side of Starlight Square features a mural of Cambridge educators Bob and Janet Moses. (Photo: Marc Levy)

Though Starlight Square construction was expected to be complete by the Friday ceremony, Tropical Storm Isaias delayed work, Monestime said. Initially it was hoped Starlight – in the words of designer Matthew Boyes-Watson, “a 12-month project that we pulled off in 12 weeks” – would open its gates the first day of August; then Saturday became the expected opening, before a final shift to midweek.

But it was hard to tell at the Friday ceremony what was missing. An elaborate scaffolding defines the different areas now overlaying Municipal Lot 5 at Bishop Allen Drive and Norfolk Street, and a wrap on the scaffolding points visitors to sections now just awaiting tables, chairs and masked people to staff them. Food will be served out of chef Gary Strack’s now closed Central Kitchen; Strack will feed the kids coming to the community center part of Starlight, with some produce from the weekly farmers market, Monestime said, in an example of “how this community should be working together.” 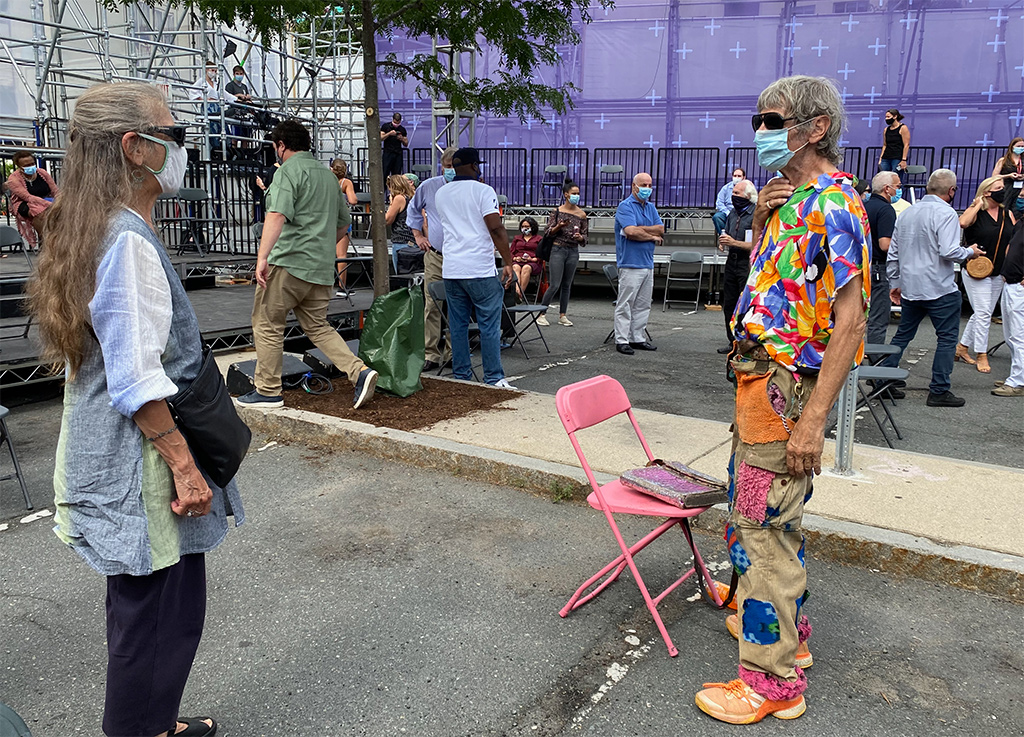 The wrap includes on one side a mural of Cambridge educators Bob and Janet Moses, because leaders should be honored while they’re still alive, Monestime said. The front, where people file in to see shows, bears a mimeograph-style, life-size reproduction of the original Central Square Theater (the marquee reveals a showing of the 1945 musical “Nob Hill” starring George Raft and Joan Bennett) that used to stand atop the Starlight Square parking lot.

Part of the ceremony honored Peter Valentine, the Cambridgeport eccentric who began urging city councillors months ago that “Central Square” wasn’t a vibrant enough name for his stomping grounds. He wanted the entire place renamed Starlight Square, and painted pink – both approaches Monestime has adapted into his coronavirus-inspired construct (melded with architect Mark Boyes-Watson’s concept of “a square within a square”) and a neighborhood visual campaign to stop infections through distancing, mask wearing and hand washing.

Valentine sat front row center Friday and heard his brother in-law extol him as a personification of the city’s “creativity, its quirkiness, its brilliance” and read several of the thoughts painted on the fence at his famously colorful “Cosmic Moose and Grizzly Bear’s Ville” at Brookline and Franklin streets. Among the sayings was one simple bit of advice: “Make something incredible.”