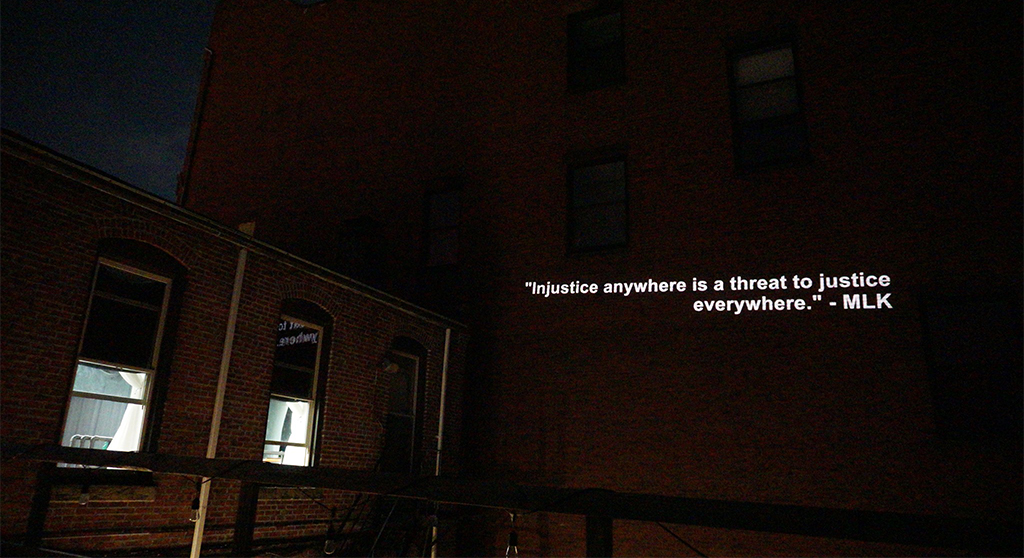 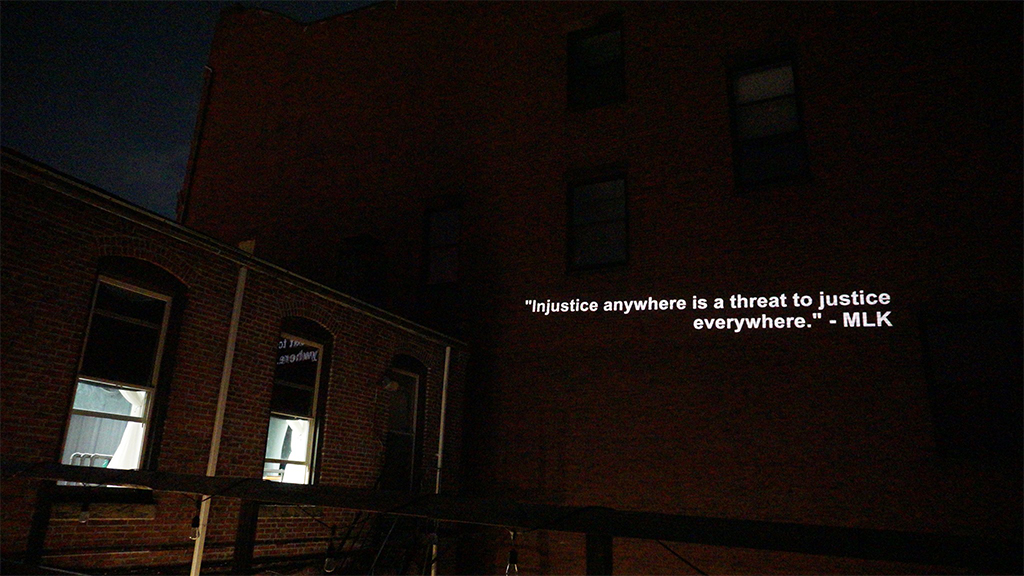 A proposed Studio@550 installation would project words on a neighboring building to raise funds for a relocation. (Photo: Studio@550 via Facebook)

With discussion of nonprofit arts funding by the city blocked until Sept. 14, the Studio@550 dance and art space proposed a desperation fundraiser installation that lets anyone project their message – at $1 per word, with a minimum 10 words – onto a neighboring building.

Along with a more traditional and direct call for donations, it was pitched as director Callie Chapman’s try at raising the $11,500 needed to relocate ahead of micro-apartment construction after the possibility of city grants disappeared last month. But her explanation of the financial situation referred to it as “precarious.”

“We’ve not had rental income for over six months and owe rent on a space we need to move out of,” Chapman said online. “We see established bars and restaurants close around us. Not many will be coming back. These bars and restaurants are inherently dependent upon the performing arts sector to drive foot traffic through their doors with drinks or dinner before or after a show, and that ecosystem seems to be collapsing.”

Grants for arts nonprofit citywide was brought to the City Council on July 27, but councillor E. Denise Simmons said she would use her “charter right” to put it off until the next regular meeting – Sept. 14 – because she had “a few … questions and concerns that probably cannot be answered this evening.”

Despite the city manager and his staff being present to answer questions and concerns, Simmons identified none at the time – and did not signal that she’d reached out to staff before the meeting with agenda questions and concerns, as councillors often do. Nor did she offer substitute motions or amendments to address the issues that concerned her, described by people by people familiar with the situation as being largely about how the funds would be administered.

Arts nonprofits were last in line after similar city grants had been administered out of the Mayor’s Disaster Relief Fund to residents, then businesses and finally other kinds of nonprofits. That did not sway Simmons at the July meeting; nor did other councillors’ spoken worries that a seven-week delay could be financially fatal.

An email was sent to Simmons on July 28 seeking comment, but she did not reply.

After Simmons applied her charter right, there was some hope councillors could vote to suspend their rules and bring the grants forward earlier, such as at one of two special meetings this week. At the urging of vice mayor Alanna Mallon, the city clerk explored whether that was possible. After consultation with the city’s Law Department, it was found there was no way around the charter right rule, city clerk Anthony Wilson said.

On Monday, councillor Patty Nolan said the delay was “something we’ve gotten a lot of questions about” and urged Mayor Sumbul Siddiqui to explain the lack of a vote, but in the jumble of items about the city’s ongoing response to coronavirus, it was never taken up.

For Studio@550 and other arts nonprofits such as the ImprovBoston comedy club, which has shut down nearly all activities and furloughed staff until 2021, the goal is to hang on for the next five weeks to see what happens at the Sept. 14 council meeting.

“Hopefully councillor Simmons is going to be able to get answers to some of the questions she had … about making sure that this arts funding wasn’t at the expense of other things, what was it going to be going for, what was the application process,” Mallon said Friday, after the ribbon-cutting for the Starlight Square open-air center in Central Square. “I know the arts community has been reaching out to her and she’s been very responsive.”