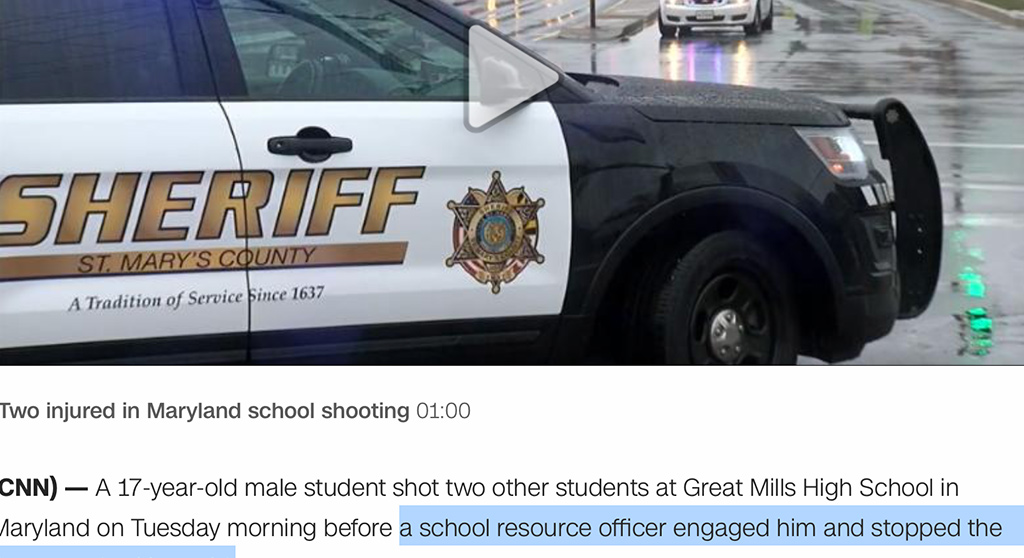 Even without all the disenfranchising of voters, closing of polling places and sabotaging of the U.S. Postal Service, I can’t help but think President Donald Trump stands a good shot at reelection. It’s mainly because of a single dialogue I had with an acquaintance in 2018.

I hope you’ll make it to the end of this piece, and through all the tedious, repetitive images below so you can appreciate fully the eventual punchline of this tragedy.

For context, there’d just been a school shooting in Maryland: March 20, 2018. A 16-year-old girl was shot in the head by a former boyfriend, 17, at Great Mills High School. The shooter, using his father’s legally purchased Glock handgun, then exchanged fire with a school resource officer. At first, it was believed the officer might have taken the shooter down; it was later learned the kid killed himself with another shot to the head.

On the day of the event, CNN described it this way: “School resource officer Blaine Gaskill responded to the scene in less than a minute, the sheriff said. Gaskill fired a round at the shooter, and the shooter fired a round simultaneously.” Seven days later, police had a better sense of what happened, and The Associated Press and other news outlets could report this: “Gaskill fired and hit [the shooter’s] weapon. At the same time, [the shooter] turned his gun on himself and fired one fatal shot to his head.”

The next day, March 28, 2018, my acquaintance posted on Facebook a video from NRATV, the video outlet the National Rifle Association ran for three years until June of last year. In the video, posted at 1 p.m. March 22, 2018, or two days after the Maryland school shooting, the host says this:

“The county sheriff said the school resource officer, ‘quickly acted.’ It is clear that [Great Mills High School] officer saved lives. Where is the wall-to-wall coverage of that? I will be watching and waiting and I urge all of you, do not hold your breath. This story is proof: When something doesn’t fit their anti-gun, anti-freedom narrative, the lying news media simply doesn’t cover it.”

Here’s what was so shocking about the conversation I’m sharing with you, and the reason: When I first knew the person who shared this video, it was because we worked in a community newsroom with a crew of other journalists, reporting the news from day to day with no dicta from George Soros telling us how to slant coverage of zoning meetings or high school volleyball scores. She went on to other papers, becoming an assistant editor in Florida before running her own newsroom in Rhode Island. She was intimate with how newsgathering worked and who made up the lower rungs of the media before climbing to the Times: just hardworking, ordinary people who write down what happens in front of them and then tell others about it.

I responded to my acquaintance on Facebook, saying it was disappointing to see her posting such nonsense without even checking to see if it was true, and listing just some of the coverage I found in a basic Google search that did note the actions of the officer: The Baltimore Sun; Buzzfeed; Channel WGN9 (using wire copy); the Chicago Tribune (also relying on the wires); CNN; Huffington Post; NBC News; the New York Post; The New York Times; National Public Radio; People; Time; USA Today; and The Washington Post. (She deleted all of her existing political posts shortly after our exchange, and I didn’t get screen captures of everything. They included a meme of Hillary Rodham Clinton saying something offensive about women voters; Snopes had debunked the meme.)

But it wasn’t enough to show her that the media she’d been a part of had simply reported the news before them.

She had a new argument to make, after switching to Facebook’s messaging service to say, “Thanks for thinking I was a disappointment because I disagreed with you.” She seemed primed to make that replacement argument when I said this (I’ve removed the name of the editor we worked for): 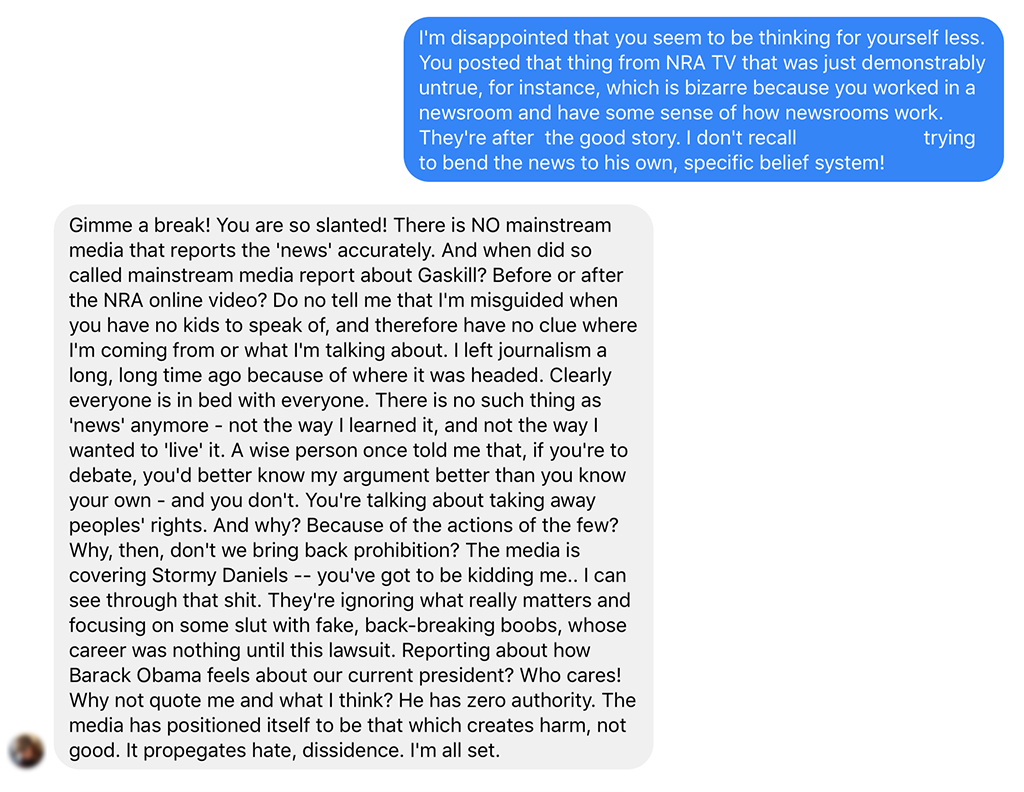 The point is that despite coming from the media, she charges here that “There is no mainstream media that reports the ‘news’ accurately.” And she implies that the “so-called mainstream media” reported about Gaskill, the school resource officer, only after the NRATV video, as though they’d been shamed by the National Rifle Association into reporting the facts. (Which is astonishing on its own – the idea that any of those media sources from The Associated Press to The Washington Post had any idea whatsoever that the NRA was questioning their coverage.)

So I went back to find the stories all over again to compare them with the NRA video’s timestamp of 1 p.m. March 22, 2018.

I made sure to cut off my search a full day ahead of the NRATV video. Everything I showed my acquaintance came out between the moment of the school shooting to 13 hours before that video went live on Facebook, just to be safe.

Here are cropped versions of the examples I sent showing the mainstream media covering exactly the thing NRATV – and my acquaintance – said they hadn’t, and doing it without the prompting of the gun lobby. 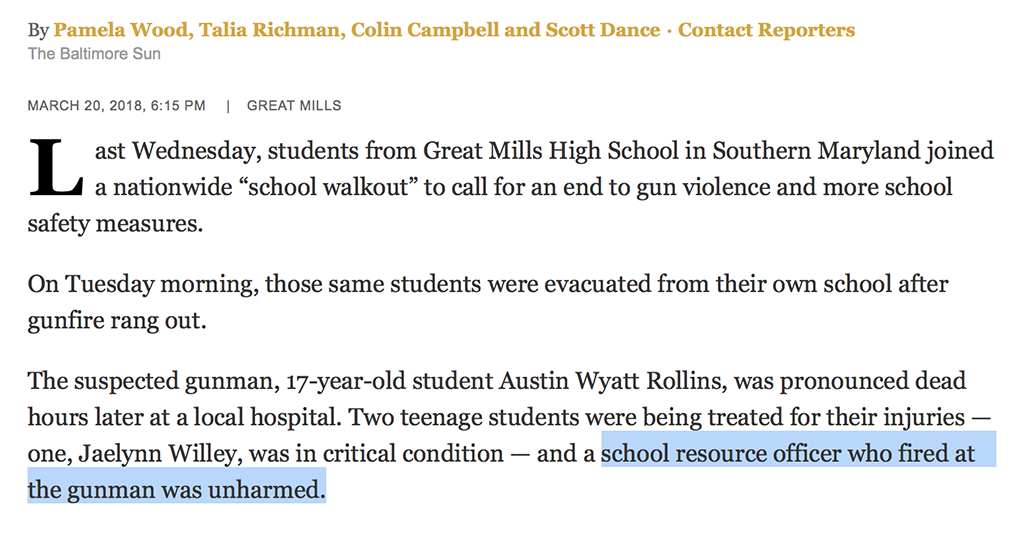 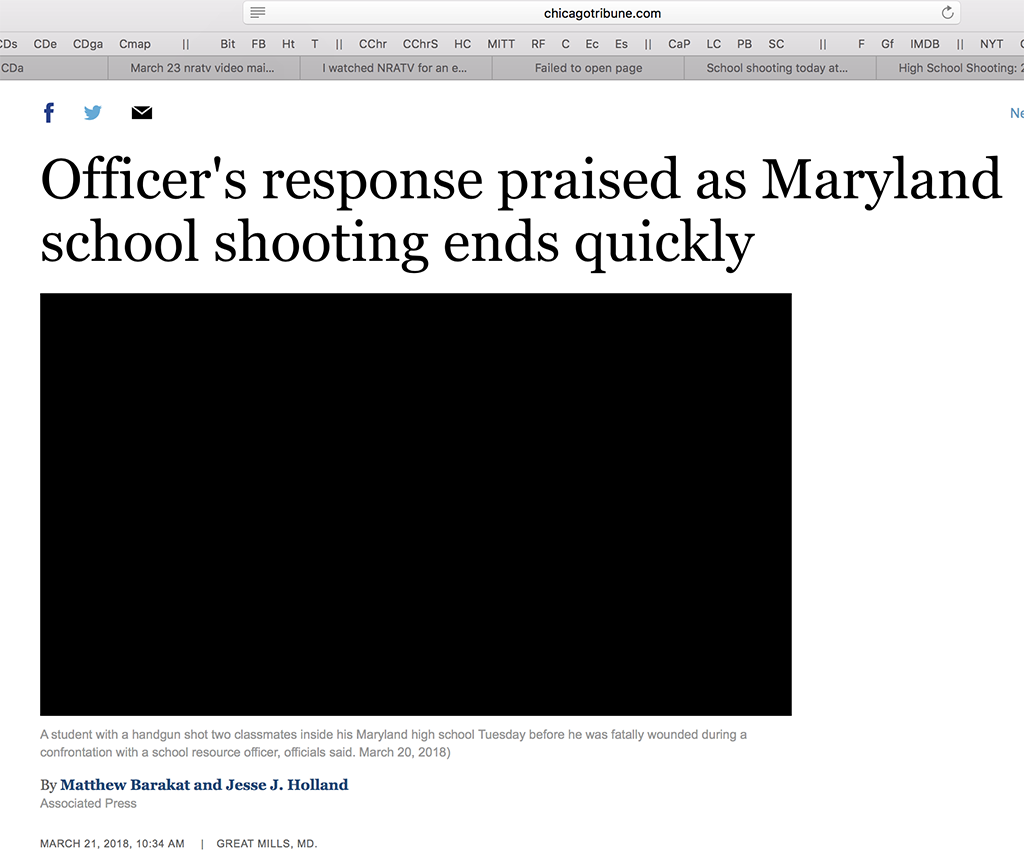 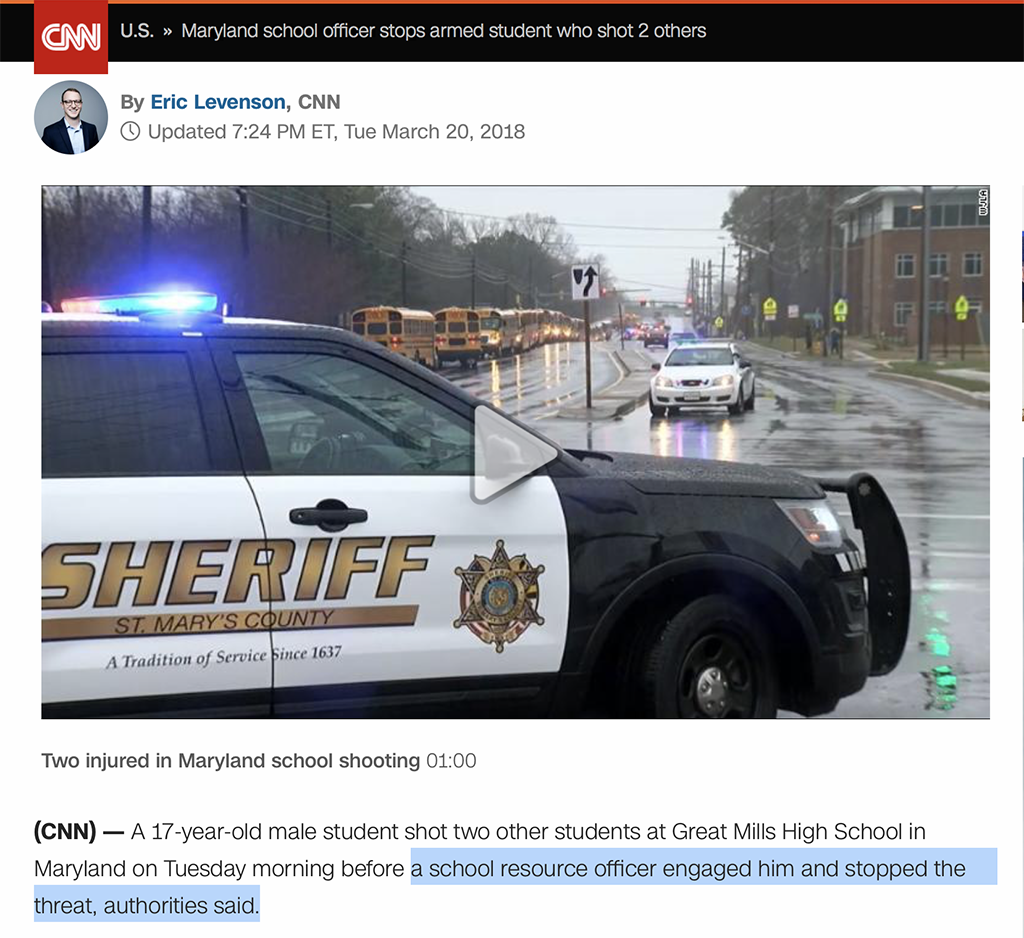 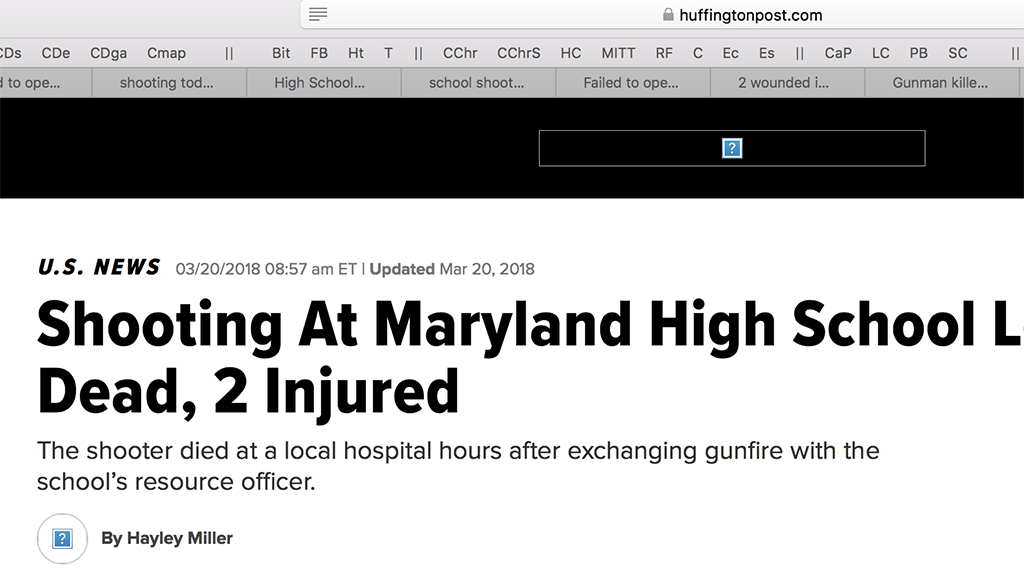 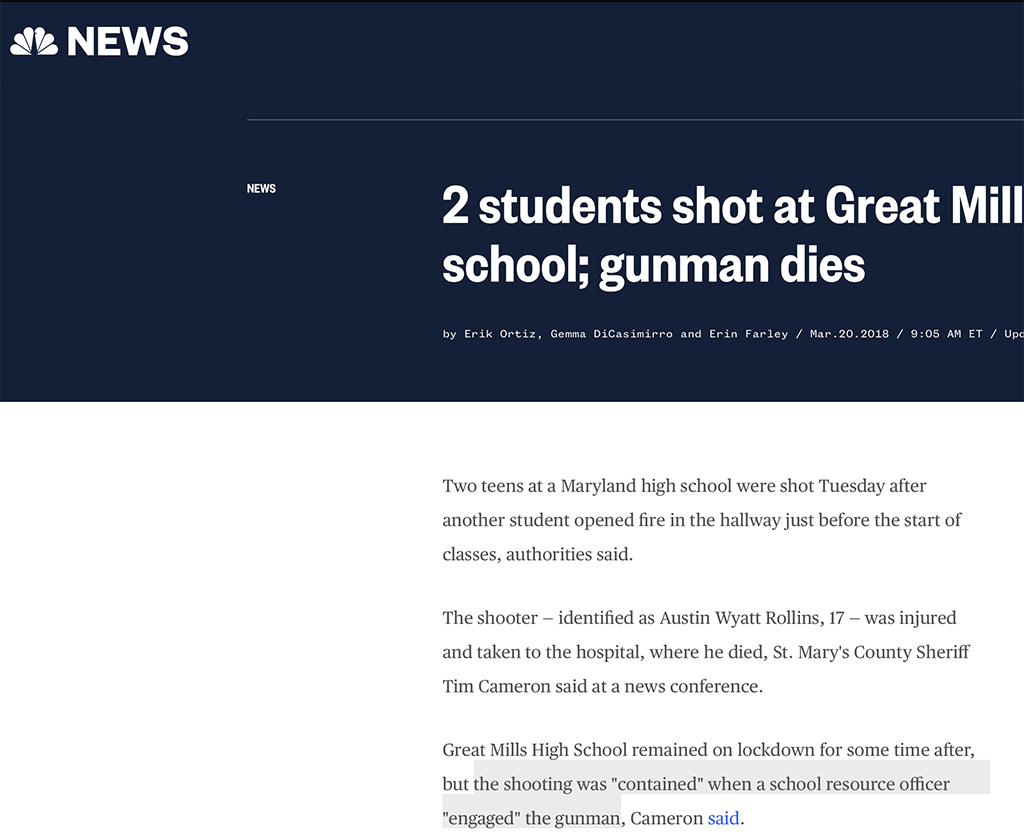 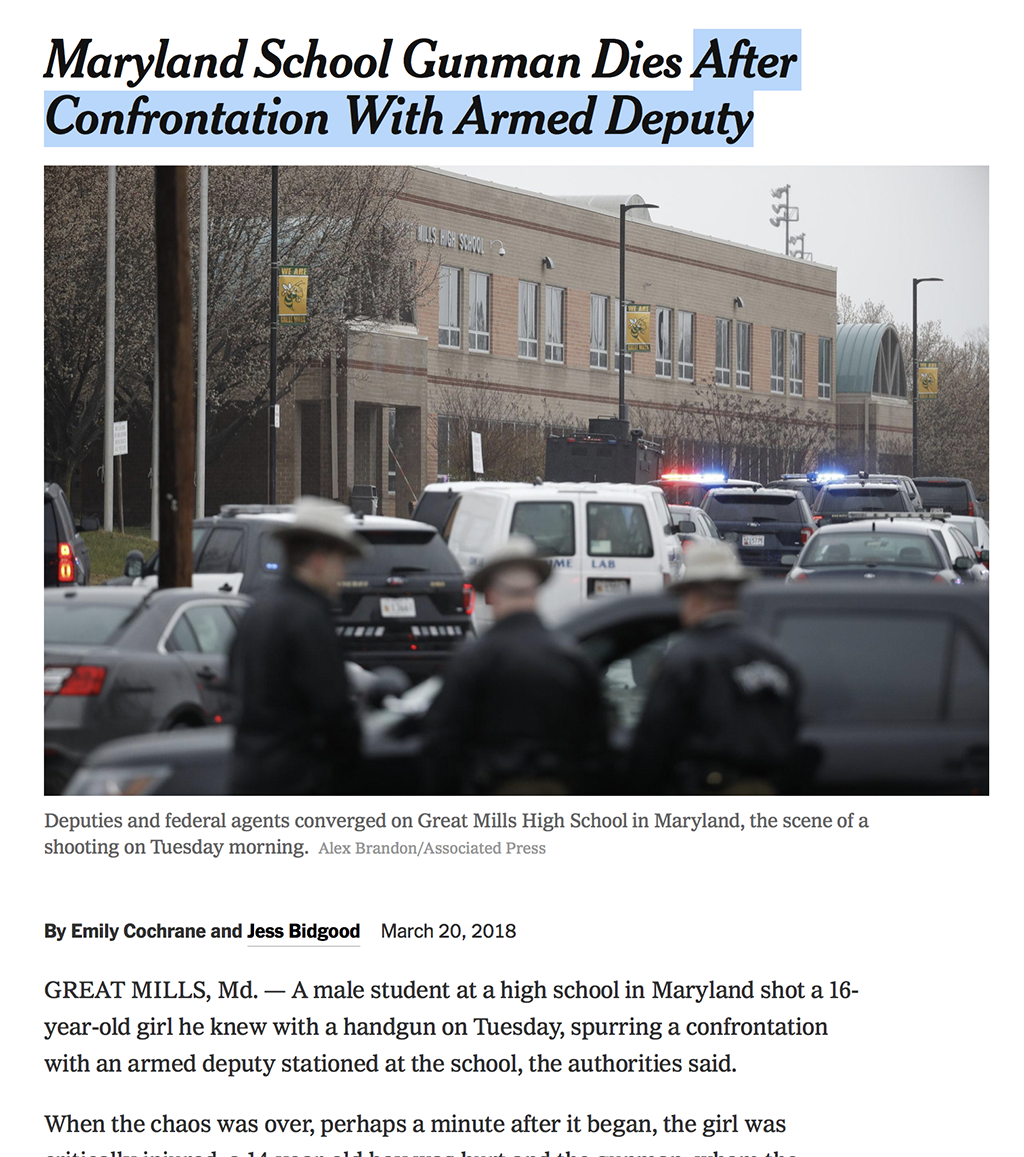 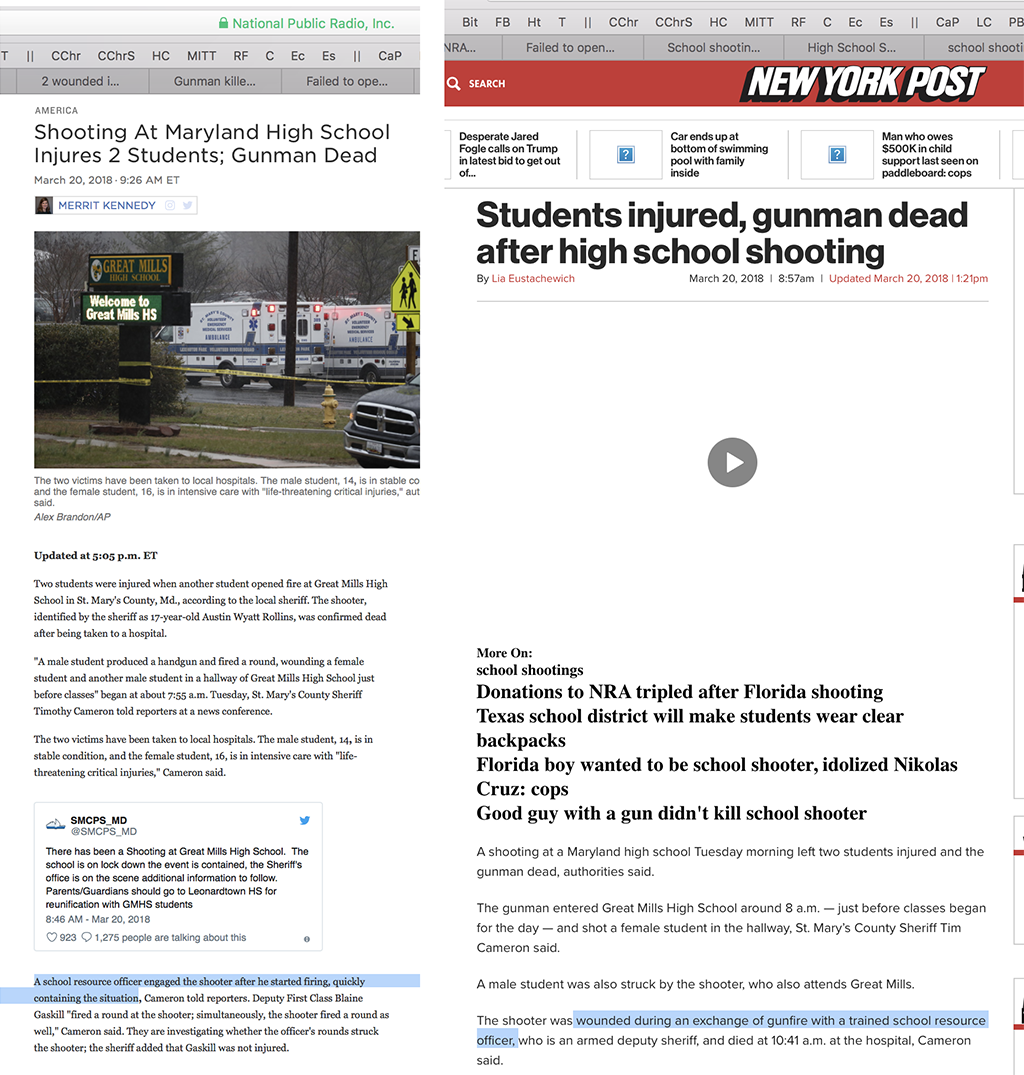 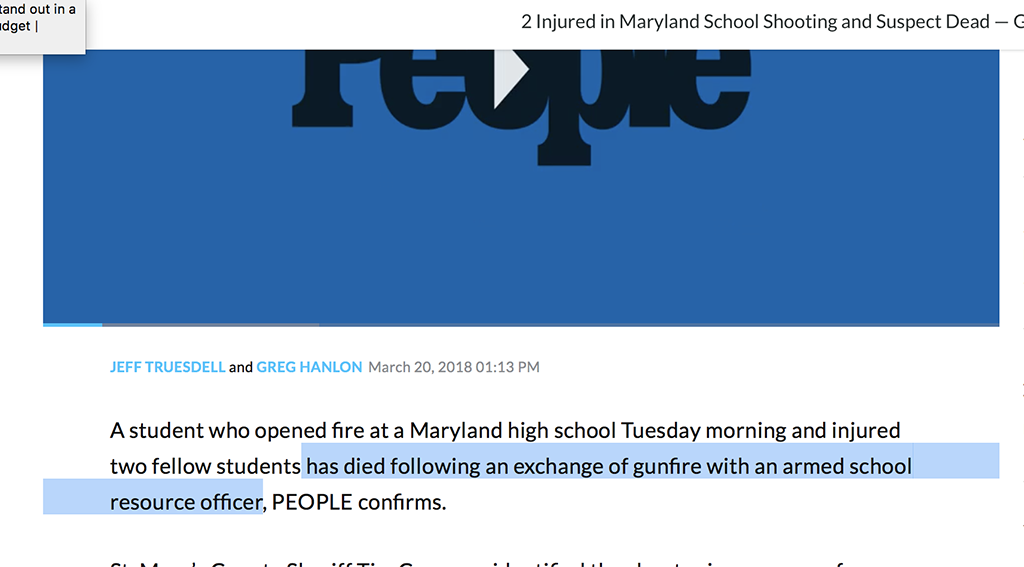 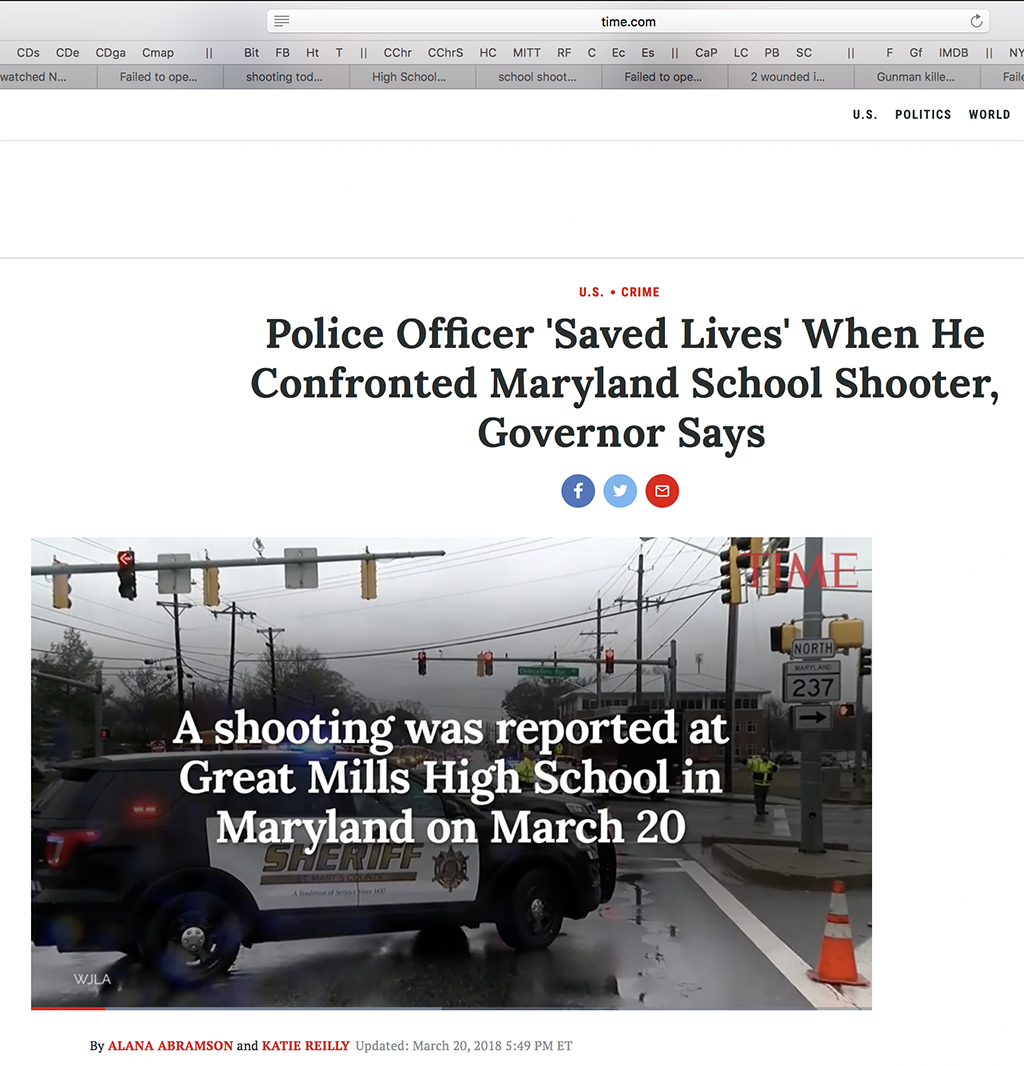 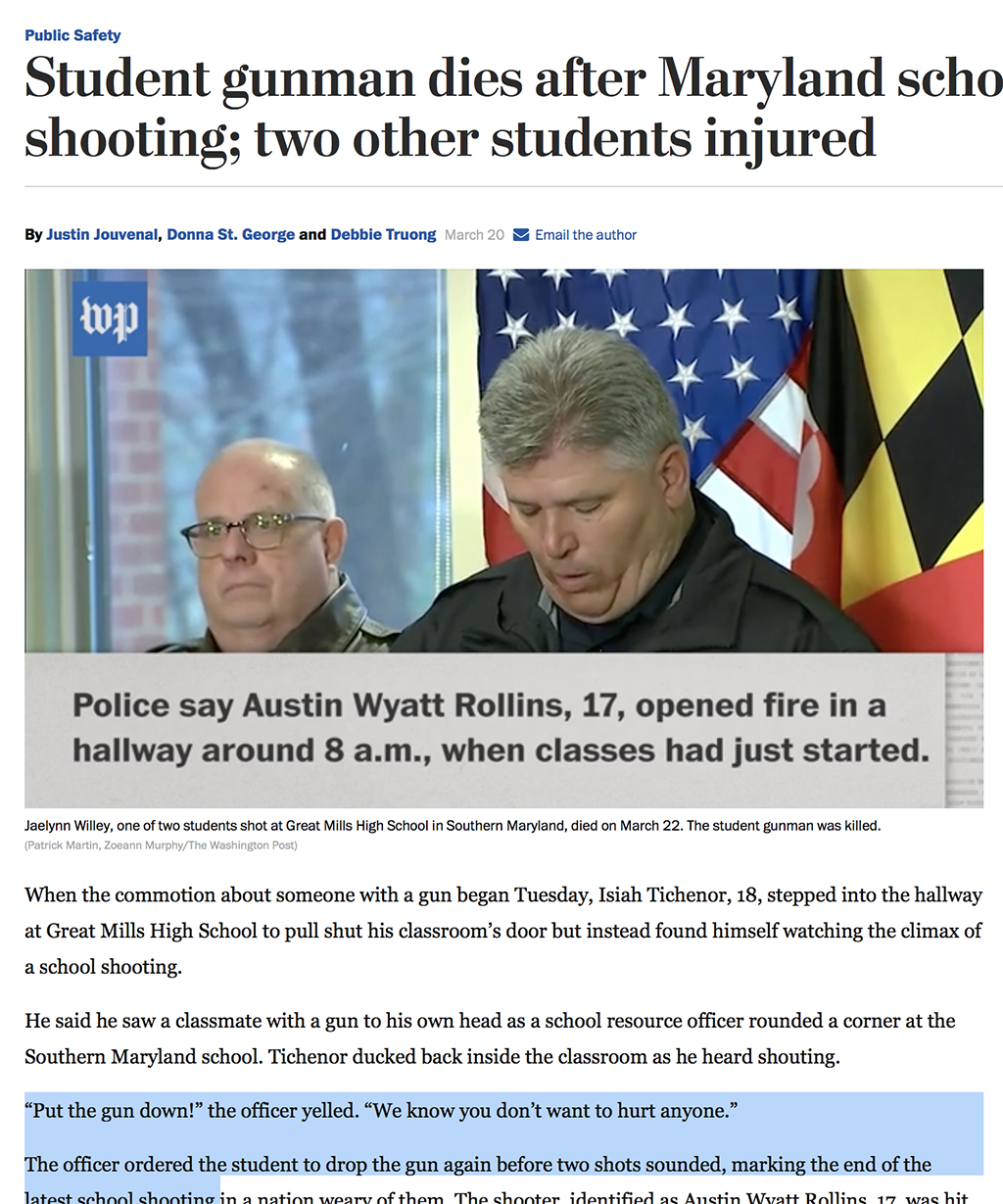 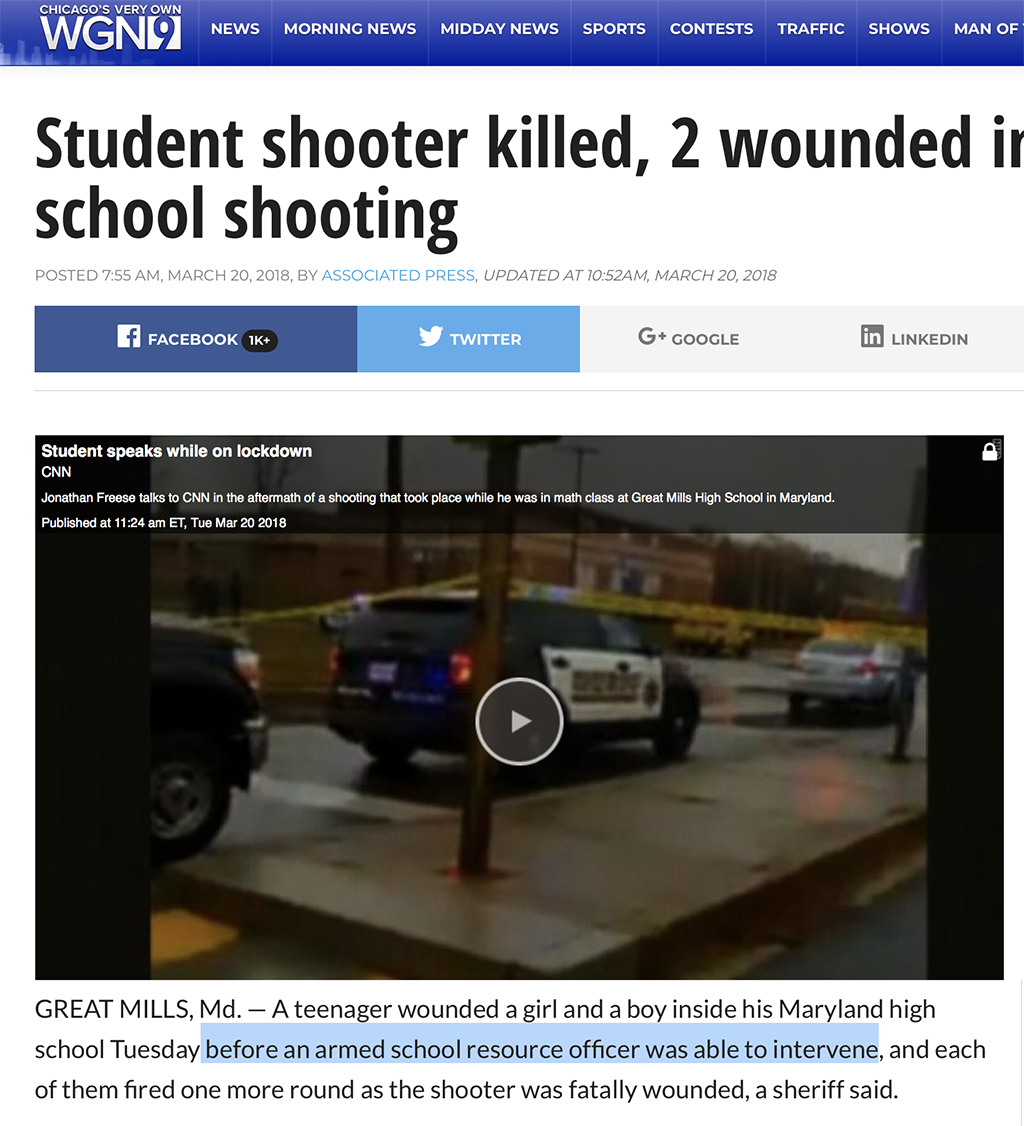 Yet this is how my acquaintance responded to this mass of evidence, which she could duplicate herself (and still can, by using Google to search for the term “Maryland high school shooting” between March 19, 2018, and March 21, 2018):

It all makes me feel quite hopeless.

When a Trump supporter – well, let me start this sentence over. When a former journalist whom you once adored and admired for her open mind and willingness to both fight and listen is presented with evidence and calls it a waste of time, you know there’s no guarantee of America finding its way back from the brink of autocracy. To the contrary, this is a sign of a country running toward that brink and eager to jump over to whatever’s beyond. No claim about once seeing where journalism “was headed” makes up for an unwillingness to look at the facts and question a single conclusion. There’s no chink in the armor of ignorance, no questioning of a belief that’s demonstrably wrong, no matter how inconsequential it would be to admit the possibility of error. There’s no give, no matter what.

Much of America (and the world) is like this: Set on a path leading to a chasm, unwilling to be dissuaded by warning signs big or small. It doesn’t make any sense, but that’s the point. The evidence doesn’t matter.