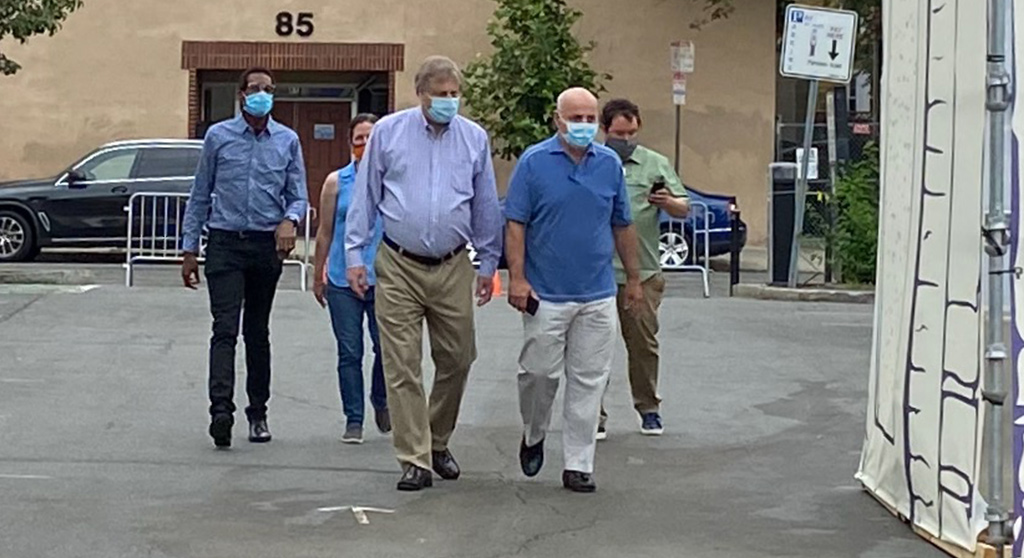 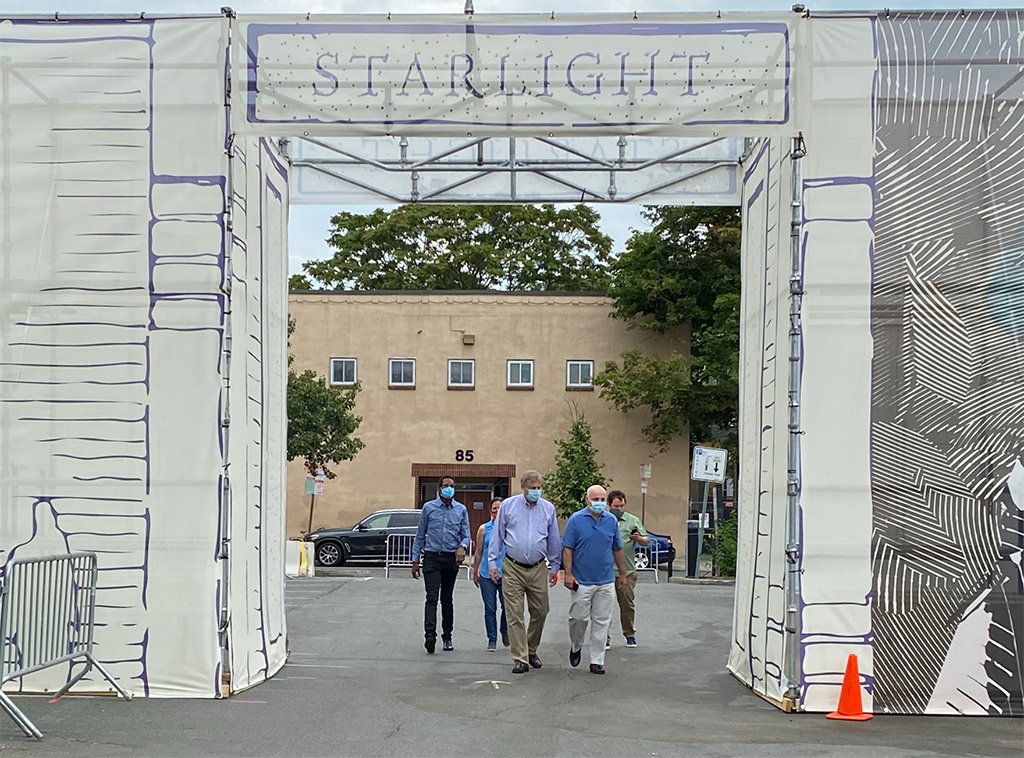 City Manager Louis A. DePasquale, second from right, arrives for the introduction of Starlight Square on Aug. 7. (Photo: Marc Levy)

After city councillors spent a half-hour voting not to reconsider their week-old vote on extending the city manager’s contract, they spent the next hour Monday talking about it.

The details of the contract first debated Sept. 14 remain the same, with City Manager Louis A. DePasquale being offered an 18-month contract extension to July 5, 2022. His starting salary will be $330,937 with 2.5 percent bumps at the start and then at the two six-month marks afterward, with the final increase coming just four days before he retires – unless the council moves to extend his time again.

The $347,690 salary that ends DePasquale’s term “brings the city manager to where past city managers have been” in pay, Mayor Sumbul Siddiqui said.

Afterward, he will join the city’s two previous city managers in reaping hundreds of thousands of dollars in pension and benefits annually, including deluxe health insurance that is covered by the city. But vice mayor Alanna Mallon addressed concerns about that final pay bump by explaining that city pensions are based on the highest consecutive three-year average of pay, which means “those additional [four] days in July will not count toward his pension in any significant way.”

Still, in his first comments after voting not to reconsider the contract extension, councillor Dennis Carlone asked: “Why are there three pay raises within 18 months?”

“I do not see these as pay raises,” said councillor E. Denise Simmons, who negotiated the contract with the city manager. “I see these as salary adjustments.”

What happened a week ago

The contract extension was first approved a week ago, late in a nine-hour meeting, and brought complaints from some councillors that Simmons, as chair of the the council’s Government Operations, Rules & Claims Committee, had not been authorized to negotiate by members at a March 12 meeting. Nor did the contract have to be voted Sept. 14; the city manager’s contract said only that he needed to be told the council wanted to extend, so details could be pinned down later. But Simmons had told councillors that she feared DePasquale would leave the city without getting approval that moment: “I think we’ll lose him,” Simmons said. “And the question has to then become, do you want to lose the head of a city that’s doing a great job.”

Ultimately, the vote was six in favor (Siddiqui, Mallon, Simmons and councillors Marc McGovern, Patty Nolan and Tim Toomey) and two opposed (Jivan Sobrinho-Wheeler and Quinton Zondervan). Taking place at around 1:15 a.m., the vote had come so late that Carlone had been forced to leave to rest before a meeting he needed to attend just a few hours later.

Perhaps because it was so late, no councillor thought to move to block reconsideration, which often happens after hard-fought, controversial votes and can be filed only by councillors on the winning side.

On Wednesday, Nolan filed for the vote to be reconsidered, saying it had been “flawed, unclear and warrants discussion with full transparency.”

“I did and I do support an 18-month extension and a 2.5 percent raise. My main point is that it is problematic and poor governance to vote on a contract we did not fully vet,” Nolan said Monday. “Coming from a background in business, I have never, not once, seen anyone with a good understanding of contracts sign one without a chance to thoroughly review it.”

In the debate leading up to vote on reconsideration, though, councillors argued that had happened. The mayor, a lawyer, had made the identical point as Nolan on Sept. 14 but, like Nolan, wound up voting “yes” anyway. Now, she said, she believed that “the negotiation aspect – we’ve done some of it” through council debate.

“This process involves uncharted waters. And in hindsight, sure, the council and government ops committee should have had this discussion on ‘Is there a how-to guide on extending?’ And there wasn’t, because it hasn’t been done,” the mayor said.

Mallon said the previous week’s debate had been a virtue: “Was it messy? Yep. But that’s how public process should work, in full view of the public that we represent.”

With the acknowledgment of how hard the city manager has been working during the coronavirus crisis – some referred to him working seven days a week, for up to 12 hours a day – the vote for reconsideration failed 6-3, with Nolan, Sobrinho-Wheeler and Zondervan the only supporters.

The contract comes back

Though reconsideration failed, the contract extension had to be brought forward for approval anyway, as corrected from the Sept. 14 version that included hand-written notes and typos. “The one thing I was asked to do was, after councillor Simmons spoke with Mr. DePasquale and it was agreed to seek 18 months of renewal instead of two years, I did make that change. And obviously, unfortunately, I missed one place in that document and had to come back and submit the corrected version for tonight’s meeting,” city solicitor Nancy Glowa explained to the council.

But she represented neither side in the contract negotiations, Glowa said, referring to that as “pretty much the only occasion when it is appropriate for the council to have their own attorney” aside from the city’s Law Department. She called it clear in the municipal code and a
“fundamental tenet of municipal law” that the city solicitor’s office represents the entire city, including the City Council. DePasquale had his own counsel in the contract process, but “I was never told that the council wished to hire their own attorney,” Glowa said.

Still, the mayor’s sense that a contract extension hadn’t been done before wasn’t quite right; Robert W. Healy’s contract as city manager was extended by the council in 2009 and 2012, when two members of the current Government Operations Committee had already been on the council: Toomey and Simmons, the committee’s chair.

There were 15 public speakers on the contract extension. Leaders such as Central Square Business Improvement District executive director Michael Monestime and East Cambridge Business Association executive director Jason Alves said the city needed DePasquale’s continued leadership as the coronavirus pandemic turned to colder weather, providing a new challenge for businesses and restaurants. Another speaker, Michael Daniliuk, praised DePasquale because “he makes sure he seeks out experts’ advice, and follows their advice.”

Discordant notes were sounded by speakers Marilee Meyer and Heather Hoffman, who noted the council’s eternal weakness for acting rashly when threatened with a loss: Google, The Broad Institute, the Mass+Main developers in Central Square were examples of threatened walkouts that resulted in councillors giving in. “Fast and fearful arguments have pushed through many an uncooked policy,” Meyer said.

When DePasquale spoke, there was little sign that he’d been ready to walk away without getting contract details pinned down months ahead of time.

“Serving the city I have called home my entire life has been the greatest honor I could have. My love and dedication to Cambridge has been an everyday part of my life. As you have heard me say many times, I believe Cambridge is the best place to live, work and raise a family,” he said. “I remain committed to working with the City Council and our community to ensure that Cambridge remains a world-class city.”