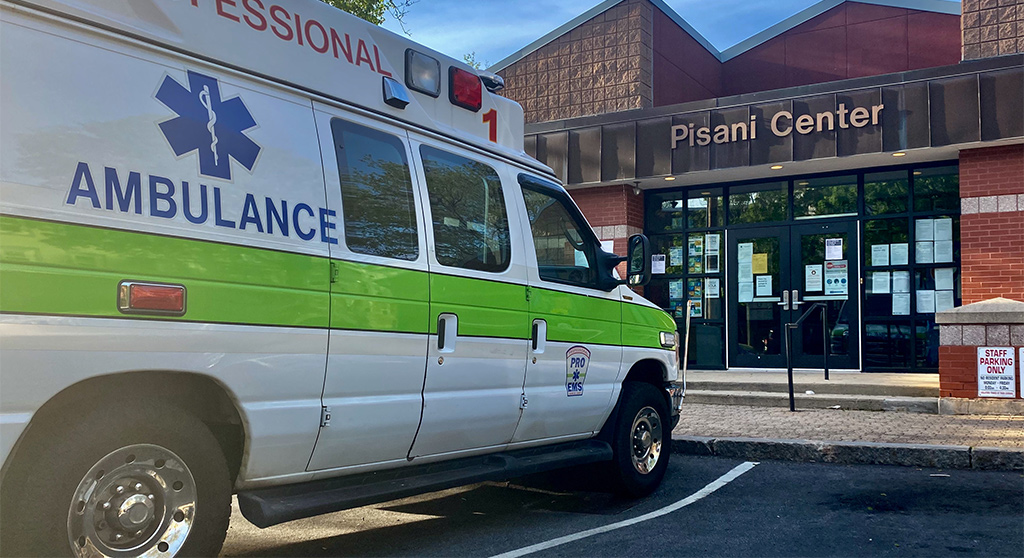 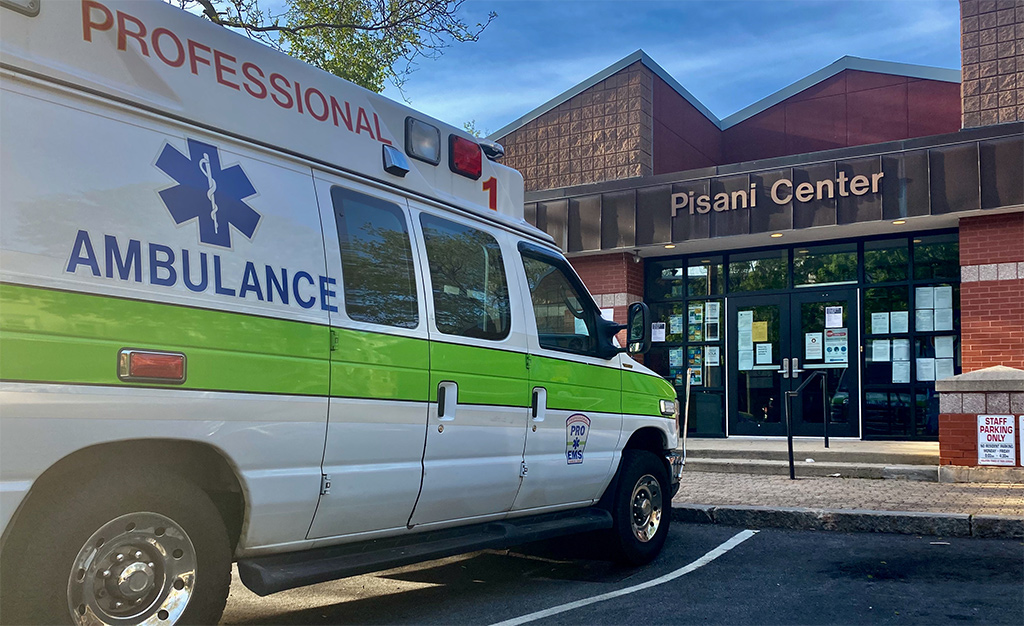 The city’s free coronavirus testing is at the Pisani Center in The Port neighborhood, as it was in May. (Photo: Marc Levy)

To one recently arrived Cambridge resident, the city’s free Covid-19 testing program leaves much to be desired, despite the city administration’s boast in a recent press release of providing more than 11,000 tests since early April.

Samuel Lazarus moved to the city in July from the San Francisco area expecting that residents would have the same easy access to on-demand testing that he experienced there, he said in an interview. “If I felt sick, I could go online and get a test within 36 hours with results two days later,” he said. “My thinking was that must be the case in Cambridge,” with its wealth brain power.

Instead, he said, when he tried out the online appointment system for free city tests, “90 percent of the time there were no [available] slots. If you did get a slot it was two weeks away.” And, even worse, “as soon as there was no [available appointment] they didn’t tell you where to go,” and just left people with a statement that no appointments were available, Lazarus said.

“They’re not doing anything to provide an incentive for people to get tested,” Lazarus said.

Lazarus sent a letter to the City Council last week outlining his criticisms, and city officials seemed to respond Tuesday at a special City Council meeting on Covid-19 – with no officials promising to make any fundamental changes.

Instead of making appointment slots available for the next one or two weeks, the city was going to post slots Tuesday for the entire month of October, about 2,000 appointments, Chief Public Health Officer Claude Jacob said. In fact, the slots posted Tuesday extended only until Oct. 10, according to the city’s daily update. Public health department spokeswoman Susan Feinberg didn’t immediately respond to a question about the discrepancy.

As for on-demand tests, answers were unclear. Jacob suggested calling your doctor, if you have one, going to the emergency room, or trying an urgent care center. Dr. Lisa Dobberteen, his department’s own medical director, discouraged the emergency room and said people could get an immediate test at the Cambridge Health Alliance test site at Assembly Square in Somerville. Nothing about testing that is posted on the CHA website offers that option.

Lazarus’ efforts to bring attention to the shortcomings he sees have uncovered more questions about the testing program. Several people who responded to his critical post on the online neighborhood discussion site NextDoor said they had easily obtained a test from the city without making an appointment. They just showed up, they said.

Asked Tuesday by vice mayor Alanna Mallon whether that was possible, Jacob admitted: “We tend not to turn anyone away, recognizing the importance of having access.” Is the city “advertising walkups?” Mallon asked. No, Jacob answered; “we did want to avoid a situation where literally folks bombarded a site with no appointment.”

That answer didn’t sit well with Mallon, who said: “Not announcing that we have the walkups kind of keeps it to an elite group of people.”

“It just becomes this real equity issue, I think around, you know, who has information, who has the power and who can access the tests,” she said. The city could avoid people not showing up for appointments by going back to releasing appointment slots “10 days out,” she said.

Up to three tests

Others who responded on NextDoor spoke of getting as many as three tests, some without an appointment. The Cambridge Public Health Department was asked but has not provided figures about how many individuals have been tested in those 11,000 tests, although the department did pass along information from the state that more than 50,000 Cambridge residents have received at least one test from all testing sources.

The Cambridge Health Alliance test site in Somerville mentioned by Dobberteen has one important exclusion that could be unclear to the public: Someone with symptoms of the coronavirus cannot schedule a test there without talking to a doctor. A week ago, the CHA website didn’t clearly include this information. A comment responding to Lazarus’ post prompted a question to its spokesman, David Cecere, who confirmed the exclusion is true.

The Alliance is offering “public health testing” to “asymptomatic people in our communities to meet the critical public health need and help prevent the spread of Covid-19. Anyone with symptoms must get prior medical assessment to discuss whether they need evaluation, in-person care, remote telephone care or triage advice. This is true for our own patients, who call the triage center and speak with a nurse, or for public health patients who we would like to contact their own primary care providers,” Cecere said.

He said CHA does not want people with symptoms to “self-schedule” without medical attention because they might be “at risk for the rapid and dramatic clinical worsening we sometimes see with Covid-19.”

The Alliance is “reviewing the information on our website to make sure it is clear,” Cecere said. On Tuesday, five days later, the website had changed to emphasize with italics that people with symptoms should consult their doctor first, including CHA patients who can make an appointment for a test on the health care system’s patient portal, MyChart. Still, the MyChart appointment page had not changed; a patient who tries to make an appointment and says he or she has Covid-19 symptoms will be told in large type: “Appointment cannot be scheduled.”

Information in smaller type advises users they may not need a test and tells them to call the CHA respiratory clinic or their doctor. The person who responded to Lazarus’ post on NextDoor apparently didn’t notice this advice.

“They ignored the problem”

Lazarus emailed the council last week with his concerns about the city testing program, saying (a little prematurely): “It is October and yet Cambridge city government has failed to come up with an adequate plan to address a second wave.” He called the testing program “staggeringly bad” for not offering reasonable opportunities to get a timely test and results, especially for people working during the day.

His dismay deepened when he received a response telling him how he could get a test instead of addressing his criticisms of the system. “They ignored the problem I was trying to raise,” Lazarus said in the interview, adding that he personally did not need a test now.

The online appointment system, with its “Slot 1,” “Slot 2” and similar murky choices, is burdensome, he said. “If you go to the website you have to click on nine sites,” he said. “Who’s going to do that?” Then, when users strike out, they’re left “with no alternatives” Lazarus said. “Whenever you’re trying to build a product, you can’t have a dead end,” he said. “You’re just putting up barriers.”

No insurance that day

There’s a critical need for on-demand testing as well as one central information source that is easy to find, Lazarus said. Many of those who responded to him on NextDoor praised the city program and said they got the tests they wanted or needed. Still, one woman described needing an immediate test because she had symptoms of a cold and couldn’t send her children to day care without testing negative. She ended up using the only choice for on-demand testing with immediate results: Carewell Urgent Care, the private chain of health centers.

The day she needed the test, she waited two hours in line only to learn that Carewell was not accepting patients who wanted to bill their insurance companies that day, so she had to pay the whole cost, the commenter said.

“If I had to wait two days for results, I would have had no child care until I got the negative results,” she said. “This is true for parents, kids and teachers, and so I really feel this is entirely unsustainable as almost every kid and teacher in our daycare now has a cold (and as they do most of the winter)!”

Testing at home too

Another commenter had a fever and no car; the city health department intervened to get her a test in her home, she said. Later, she learned that patients of CHA and Mount Auburn Hospital can get at-home tests – another piece of information that isn’t made public. At any rate, she needed the intervention because she uses another hospital.

“If we cannot test people in the moment we will not keep our neighborhoods safe,” Lazarus said in his message to the council. “My family lives here. And we do not feel comfortable because you and your administration have failed compared to towns across America who have set up free, on-demand testing.”

“We’re really sick of self-congratulatory attitudes,” he said in the interview. He added: “There’s a lack of humility in the way they are approaching the solution. Acknowledge when you need help and people will step up.”

This post was updated Sept. 29, 2020, to swap in photographs showing a coronavirus testing site more relevant to the story’s content.