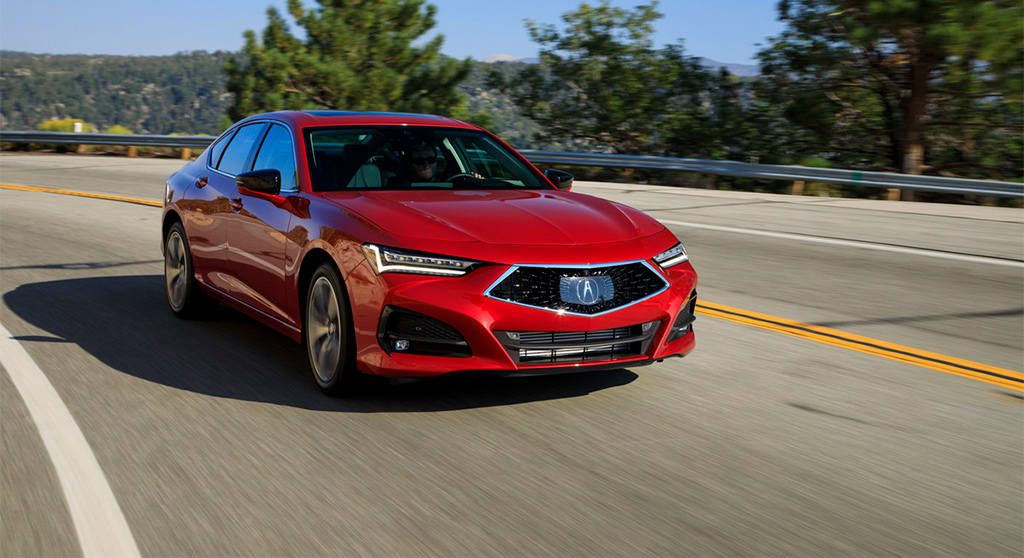 The all-new 2021 Acura TLX compact sport sedan takes a classic Honda Accord or Toyota Camry-type vehicle and soups it up with lots of performance and luxury features. Completely redesigned for 2021, the model features a turbo-charged engine, available Brembo sport brakes and other high-performance gear.

I recently test drove the TLX (base price: $37,500) beefed up with the AH-AWD trim line and an advance package. That added premium perforated-leather seats, an adaptive chassis damper system and more, taking the sticker price up to $48,300. My test car’s platinum white pearl paint would add another $500, and the car carries a $1,025 destination charge, for a total MSRP of $49,825.

On the outside, my TLX looked like a sporty take on a Japanese sedan, with a wide hood, jaunty fascia, 19-inch metallic sport wheels and those Brembo brakes. These gave way to standard sedan-type front and back doors and a moonroof.

All the way back, the TLX offers a decent-sized but not cavernous trunk that can comfortably fit one large suitcase and probably three smaller bags. Inside, my test vehicle came with a nice tan-and-black leather interior – tan perforated leather seats, a black stitched-leather steering wheel and tan and black stitched leather on the dash. There’s no separate gear shifter, just a series of easy-to-use shift buttons on the dashboard. The model also features an analog speedometer and tachometer, cruise control and other controls built into the heated steering wheel.

There’s also a dash-mounted display screen for audio, navigation and other features. These include modern features such as Android Auto, Apple CarPlay and a built-in AT&T hotspot. My test model also came with SiriusXM radio and Acura/ELS Studio 3D Premium audio with 17 speakers, including four Highline overhead ones.

You control the car’s display screen with a laptop-like control pad on the center stack, while a dozen or so old-school manual buttons run the car’s climate system, which included heated/cooled front seats on my test car.

In back, the car’s rear seats can theoretically accommodate three people, but two adults would be more realistic even for city trips (forget long-distance ones).

That said, three smaller kids would probably find the room in back decent for city trips, and two might even be okay for long destinations. My test model’s rear seats also came with built-in heating, along with a rear-seat heat/air-conditioning vent. On the road, my test TLX provided standard Japanese sport sedan performance thanks to its 272-horsepower turbocharged four-cylinder engine and 10-speed automatic transmission.

Front, side and rear sightlines were all good, and the car shot up quickly from zero to 60 mph on the highway – although the engine was a tad noisier than I expected as it revved up to 5,500 rpm on a quick acceleration. Cornering, braking and parking were all good.

The model also comes with a “Dynamic Mode” system that lets you tune the suspension for a comfort, sport, normal or personalized ride, but I noticed little to no difference between them. The U.S. Environmental Protection Agency rates the TLX at 21 mpg/city and 29 mpg/highway. During a weeklong test drive, I logged a combined 22 mpg city/highway.

The bottom line: The 2021 Acura TLX is a worthy competitor in the compact sport sedan segment, but it’s up against the top-quality European competition that rates a close look as well.