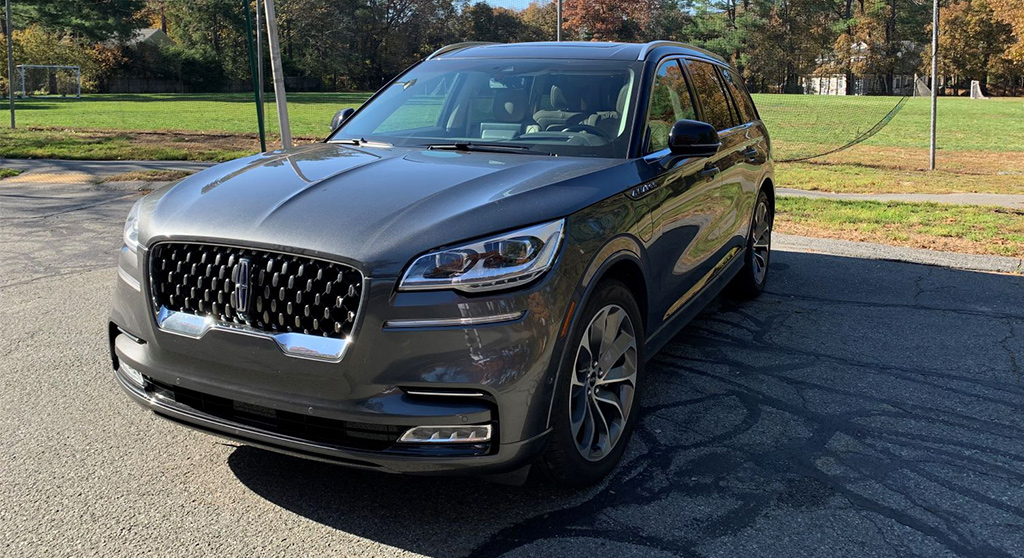 The idea of an eco-friendly three-row SUV might sound like an oxymoron, but Ford has actually done it with the all-new 2020 Lincoln Aviator Grand Touring edition.

A new model for 2020, the automaker based the Aviator on the completely redesigned Ford Explorer SUV. But Ford added plug-in hybrid technology and tons of luxury accoutrements – along with a hefty sticker price. (North of $80,000 on my test model.)

On the outside, the Aviator features a beefy grille and hood in front, which lead back to large front and back doors that open with a hefty “chunk” noise that sounds like a bank vault opening or closing. The model’s side mirrors fold or unfold automatically when you approach or depart the car with the key fob in your hand. My test model also illuminated the door handles at night automatically, along with using a special light to project a cool Lincoln logo on the ground near the driver’s side door.

My test Aviator illuminated automatically when I approached with a key fob – including displaying this cool Lincoln logo. (Photo: Jerry Kronenberg)

Additionally, my test vehicle included 21-inch premium painted machined aluminum wheels (part of a $14,950 Equipment Group 302A options package). And it came with a fantastic “Panoramic Vista Roof” that basically makes the Aviator’s entire top into a giant sunroof.

All the way back, the Aviator comes with a push-button liftgate that opens to a cargo bay that’s decent sized even when you’re using all three rows of seats. This area could easily fit four or five grocery bags, and also has a small privacy compartment for the plug-in hybrid charger and a handbag or two. (There’s no spare tire.)

If that’s not enough space for you, a great push-button electric system drops the third-row seats flat automatically. This makes for a very generous cargo bay that can accommodate three or four large suitcases or a small appliance such as a window air conditioner.

And if that’s still not enough room, the second-row seats easily fold flat as well, creating a truly cavernous cargo bay that could easily handle six or seven large suitcases or a big piece of furniture such as a dresser. The Aviator offers a truly cavernous cargo bay if you fold down the second- and third-row seats. (Photo: Jerry Kronenberg)

Inside, my test model featured tan perforated-leather seats, a black-and-tan stitched leather steering wheel and a black-and-tan dashboard finished with a mix of plastic and leather. The model has an LED driver’s side display for an odometer and other trip information, along with a large touchscreen in the center of the dash to control audio, climate and other systems.

There are also a half-dozen old-school buttons and dials to control the AM/FM/SiriusXM/Bluetooth 28-speaker Revel audio system (part of the 302A package). The Aviator also has a unique set of radio-like buttons on the dashboard to put the vehicle into park, drive, reverse, etc., instead of relying on a traditional shifter. The Lincoln Aviator doesn’t have a gear shifter, relying on radio-style buttons marked “P,” “R,” …“N” and “D” on the dashboard instead. (Photo: Jerry Kronenberg)

The SUV’s front seats are super-roomy, with some of the best headroom, legroom and hip room of any car I’ve tested.

The driver’s and passenger’s side front seats come with 30-position electric seat adjusters controlled by a great set of button controls on the doors that are shaped like a little version of each seat. You just press the buttons corresponding to the seat’s base, back or headrest, and these adjust to your liking. The Lincoln Aviator has very intuitive seat adjusters on the driver’s and passenger’s side doors. (Photo: Jerry Kronenberg)

The model’s two second-row seats also offer very good headroom, legroom and hip room if the third-row seats aren’t in use and these seats are set far back. They come with individual armrests. While I found these seats very spacious, they put some strain on my lower back after a while – probably due to the vehicle’s sloping roofline lowering their position in the cabin relative to the floor.

The SUV’s third-row seats aren’t bad, but require some athleticism to climb into or out of. Only two small kids or one adult could use them, though, unless the second-row seats are moved up a bit. Even then, two adults could comfortably use the third row only for short city trips, although small kids or a baby carrier would work fine for longer journeys.

On the road, the Aviator Grand Touring’s plug-in hybrid power plant, all-wheel drive and 10-speed automatic transmission work well. The model combines a 400-horsepower twin-turbo V-6 engine with an electric motor that’s rated to run all-electric for up to 21 miles.

Combined, the systems offer 494 horsepower, which provided plenty of power for jack-rabbit quick starts during my test drives. Braking was also excellent.

My test model ran for 14 miles in all-electric mode on a full charge, offering a generous 83.5 mpg in electric-only mode – very impressive for such a large vehicle. The Lincoln Aviator Grand Touring edition comes with a plug-in charger that can connect to 110- or 220-volt power systems. (Photo: Jerry Kronenberg)

After the plug-in batteries charge down, the Aviator Grand Touring flips seamlessly into hybrid gas/electric operation while you continue driving.

The U.S. Environmental Protection Agency rates the Aviator Grand Touring AWD at 23 mpg combined city/highway in gasoline-only mode, or 56 mpg in a mix of hybrid/all-electric operation. I got combined 33 mpg overall during a weeklong test drive – very good for a large vehicle, but probably worth the extra tens of thousands of dollars only if you’re a real environmentalist.

As for performance, my test Aviator offered a smooth, quiet ride in both city and highway driving. A “Drive Mode” system lets you choose from six different ride settings – Normal, Excite (sporty), Conserve, Preserve EV, Slippery and “Deep Conditions” (mud or deep snow). I didn’t notice much difference between them.

The Aviator also offers a classic SUV “high-up” road view, along with excellent front, side and rear sightlines. The vehicle is a tad challenging to back up or park given its large size, but the excellent sightlines help a lot.

Of course, all of the luxury and plug-in hybrid technology doesn’t come cheap. A base Aviator with a traditional gas-power engine carries a $51,100 sticker price.

Grand total: $83,245 – but given that this is a large, expensive U.S.-branded vehicle, expect plenty of incentives and negotiating room. There’s also a 2021 Aviator ($51,100 MSRP) that’s already out with minor changes, which means you can expect exceptional deals on remaining 2020s.