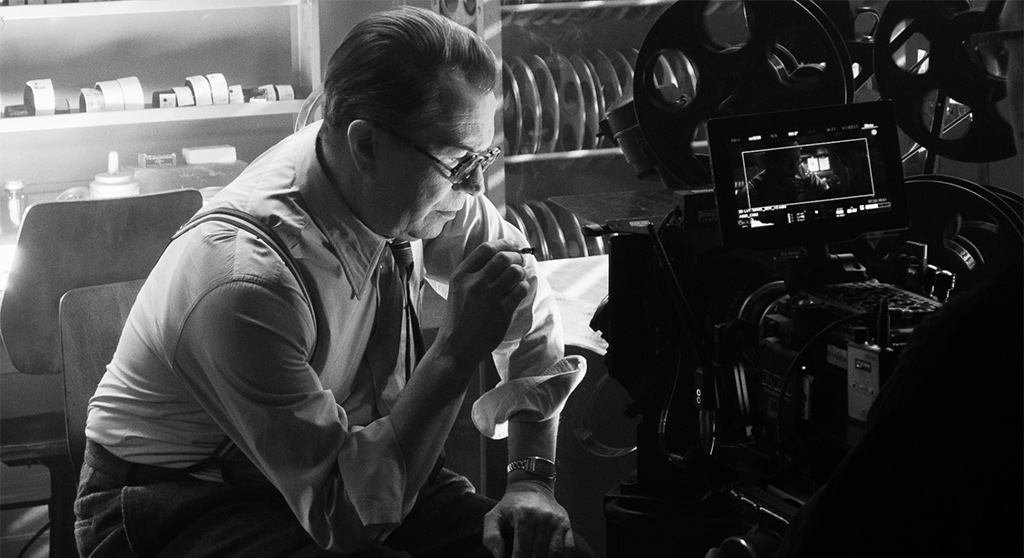 There’s a scene in Thomas Vinterberg’s recently released “Another Round” in which Mads Mikkelsen’s teacher asks his students what kind of person they’d want to hang out with: a vodka-swilling, late-night carouser, a closet beer-nipping infirm or a hyper-serious teetotaler. The class for the most goes for door No. 1 – Winston Churchill. FDR is the second, who receives some love. The one who receives no votes, and a raucous cheer of relief when his identity is revealed, is no other than Adolf Hitler. The infamous icon of tyranny and extreme racism curiously also makes an indelible mark in “Mank,” the latest from visual stylist David Fincher, in a conversation between Herman Mankiewicz (Gary Oldman, the Mank in question), studio head Louis B. Mayer (Arliss Howard, playing that final M in MGM) and newspaper mogul William Randolph Hearst (Charles Dance, who worked with Fincher on his first film, “Alien3”). Talking about renowned socialist and writer Upton Sinclair running for governor of California in 1934, Hearst dismisses the “Oil!” author (the basis for the Paul Thomas Anderson film “There Will Be Blood”)  as a person not to be taken seriously – like Hitler. Sinclair loses a close race, and we all know the evils Hitler went on to enact.

The scene is important because it casts a strong contrast between the washed-up writer Mank, a journo turned Hollywood hired gun, and the powerful Hearst, who would become the alleged subject of Mank’s pen for Orson Welles’ iconic American classic, “Citizen Kane.” In 1942, the revered film would win an Oscar only for best screenplay (John Ford’s “How Green Was My Valley” beat it for best pic). Mankiewicz and Welles shared the co-credit, and over time there have been debates over just how much either man contributed to the then 24-year-old Welles’ directorial debut. Fincher’s take, coming from a script by his late father Jay (he passed in 2003, and this is his only credit), makes no quibbles that it’s nearly all Mank. But the film’s less about the penning of the instant classic and more about the sands of power in Hollywood – a quagmire that ensnares, more than Mank, kid brother Joseph L. Mankiewicz (Tom Pelphrey), who would go on to direct “All About Eve” (1950) and “Sleuth” (1972). Mank’s got one foot in and one foot out, and a broken leg from a car crash and a penchant for the sauce throughout as he navigates the studio lot that Mayer runs like an episode of Trump’s “Apprentice.” There’s so much wrapped up in Welles’ promising debut that the affable John Houseman (Sam Troughton) is brought in to keep him sober and focused. Then there’s also the women who play muse to Mank, including Hollywood it girl of the time Marion Davies (Amanda Seyfried), the nurse who helps mend him back to health (Monika Gossmann) and overly patient wife (Tuppence Middleton).

It’s hard to believe that Fincher, who used to make a living shooting Loverboy and Madonna videos, has made only 11 films to date, with “Fight Club” (1999) and “The Social Network” (2010) as well as the underappreciated TV series “Mindhunter” as some of the shinier jewels. It’s been six years since his last, “Gone Girl”; this is an obvious labor of love, an ode to his father and the (for better or worse) heyday of big studio Hollywood. It’s shot in opulent black and white by Erik Messerschmidt, which feels like an apt choice and is accompanied by a period appropriate score with a bit of a haunting modern edge by Trent Reznor and Atticus Ross, who have teamed with Fincher on numerous occasions and won for “The Social Network.” The real key to the success of “Mank,” however, is Oldman, who won an Oscar for his performance as British boozer Winton Churchill in “The Darkest Hour” (2017). He’s an actor who can slide seamlessly into any genre and any role and make it his own, as well as disappear into the character – he does it again here and should almost certainly be in the conversations about the finest thespian turns of 2020. Howard as Mayer is a force in his own right and a perfect grinding board for the boozy Mank. Fincher, Oldman and Howard, et al., embrace and relish the golden era, but not without shining lights into the dark corners of filmmaking power and the politics of the time.