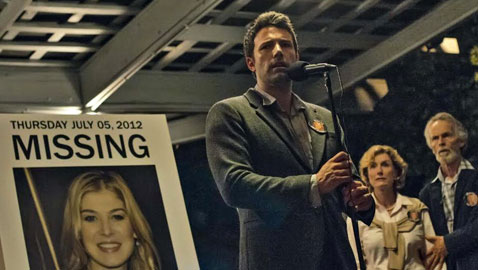 How to go at “Gone Girl”? Anyone who’s read Gillian Flynn’s wildly popular novel (she penned the script as well) knows it has some pretty well-laid change-ups, and we’re not talking about that big hooking plot twist that comes sailing in at the end. No, we’re talking about subtle turns that change and redirect context and the viewer’s orientation, forging an ephemeral yet enjoyable immersion into the rapture of intrigue. 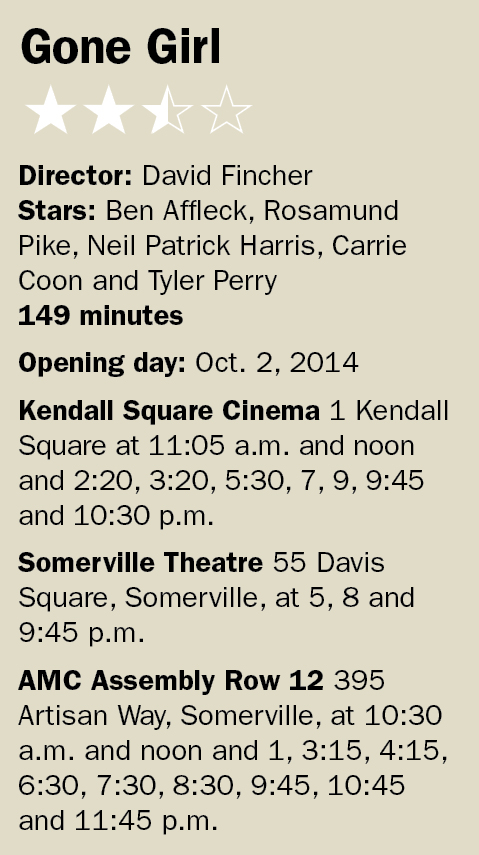 As the title implies, a woman goes missing under some curious circumstance, and her husband’s innocence or culpability in the matter hangs in the balance. “Gone Girl,” much like Denis Villeneuve’s dark and foreboding “Prisoners” (2013), isn’t so much about solving the mystery, but the personalities that drive and shape it. It’s an interesting comparison, because the bleak, rainy sheen Villeneuve renders conjured up ominous shades of some of David Fincher’s more macabre works, namely “Zodiac” and “Se7en,” and poetically enough it’s Fincher himself who’s taken the reins of Flynn’s transposition.

Given Fincher’s success with cinematic adaptations of culturally revered books (”Fight Club,” “The Social Network” and “The Girl With the Dragon Tattoo”) the pairing would seem perfect, but an assembly of ideals doesn’t always guarantee a victory. That’s not to say “Gone Girl” doesn’t work – far from it – but it is hampered by the continual churn of machinations and the inherent contrivances in Flynn’s yarn. That said, viewers aren’t fed any silly red herrings, and Fincher is far too accomplished a director to stumble into cliché. At the core, he’s a stylist who’s mellowed over the years. The flash cutting in “Fight Club” and “Se7en” has been supplanted by less frenetic, jittery editing to make a mood and haunting aural moodiness composed by Trent Reznor and Atticus Ross, who won an Academy Award for their collaboration with Fincher on “The Social Network.”

The overall casting of “Gone Girl” is a curious thing and, in a way, a minor act of ingenuity. At the center you have the wooden Ben Affleck as Nick Dunne, the man under police investigation and public scrutiny for the disappearance of his wife. As the wife, Amy, Rosamund Pike cuts a richer, more complex figure. Initially she’s reserved, demure and every part the victim-in-waiting, but as the perlustration of Nick deepens and the film cross-cuts to entries in her diary, we realize she’s something more, something deeper and less appealing. Her past casts insight: She grew up the subject of a wildly popular children’s series that her mother penned, aptly called “Amazing Amy” and went to all the best schools. Then she met Nick. They had it all. They lived in New York, they were writers, they had freedom and the perfect partner – life was better than good. Then the recession hit, they lost their jobs, Nick’s mother became stricken with cancer and so to Missouri they go to take care of the withering mom. Mom passes, Nick buys a bar and Amy vanishes.

Fincher’s nonlinear juggling of plot points is enthralling, and Pike performs with aplomb, but it’s the smaller players that add the buff and shine. I’m not sure if it’s Tyler Perry as Nick’s silver-tongued attorney or Carrie Coon as Nick’s sassy, foul-mouthed twin sister, Margot (they’re so close they’re accused of “twincest”), who steals more scenes from Affleck, but they’re genuine beings and the only ones who have Nick’s back. Crime-fighting “Greek chorus” Kim Dickens and Patrick Fugit bring nuance as detectives on the case, with one sympathetic to Nick while the other has him pegged for guilty from the get-go. Most pivotal in a blip role is Neil Patrick Harris as a yuppie who’s had a thing for Amy since boarding school. His Desi Collings is the story’s wild card, and also its most vacuous vessel.

The one statement that rings through “Gone Girl,” beyond the rich and successful being entitled to remain so even in down times, is its plumbing of the media and the eroding tenets of journalism with Nancy Grace-like incarnations shrieking on TVs that loom in the frame of nearly every scene. It’s a brilliant, acerbic skewering that almost rises to the camp of Paul Verhoeven’s sardonic “RoboCop.”

“Gone Girl” weighs in at nearly two and a half hours, but it’s a lean long time. With Fincher at the helm, the film sails ahead with seamless grace. Not all the veers and neck-cranking developments pay off, but there’s a lot to praise in the moody, fractious friction throughout and the enigmatic desolation in the pools of Pike’s limpid blue eyes.