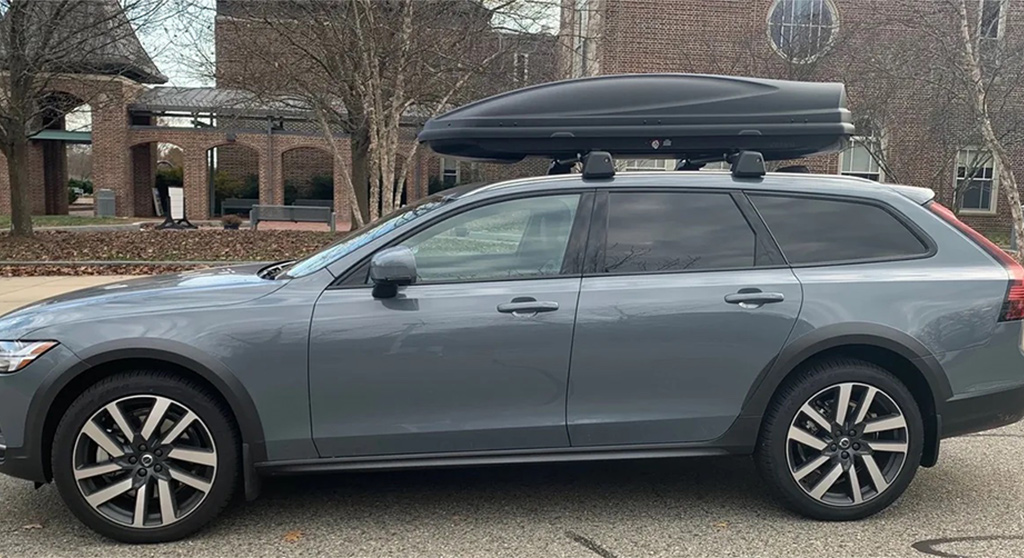 If I had to pick one car to actually buy among all those that I’ve tested over the years, a vehicle such as the 2021 Volvo V90 midsized wagon would be high on the list.

Slightly updated for 2021, the V90 (base price: $51,800) offers a great mix of stylishness, cargo space, performance and Volvo’s legendary safety features. I sure appreciated the model’s automatic braking, which kicked in when the car in front of me slowed suddenly to change lanes on a state highway.

All the way back, my V90’s automatic liftgate came with a classic Volvo rear wiper. My test model also featured optional 20-inch 10-spoke alloy wheels ($645) and a panoramic sunroof. An optional $1,360 roof box pretty much covered up the sunroof, but it did add 15.2 cubic feet of storage space. 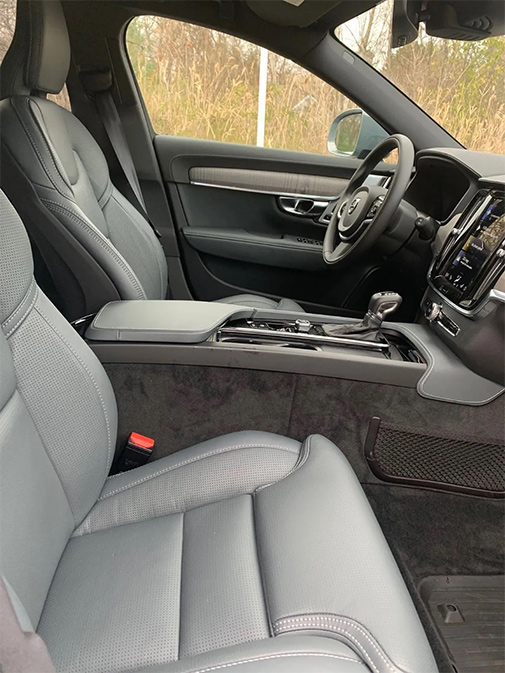 My V90 also featured a stitched-leather steering wheel and leather-wrapped gear shifter, along with stylish leather-and-chrome door interiors and a matching dashboard. The model comes with a unique keyless start/stop engine dial in the center stack. 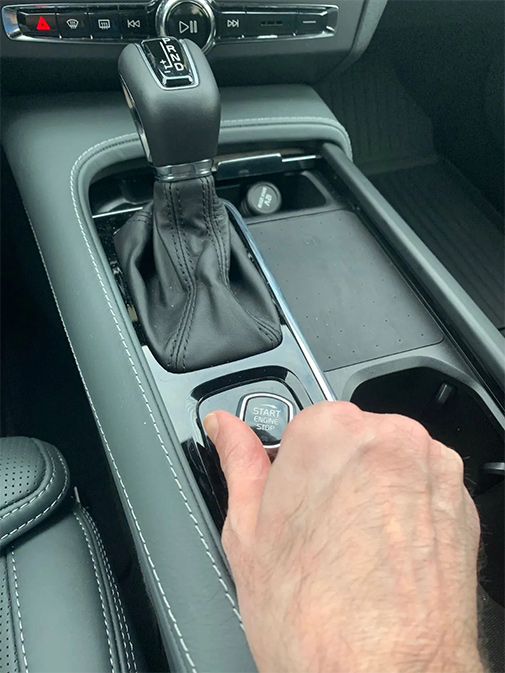 The V90 comes with a keyless start/stop knob on the center stack. (Photo: Jerry Kronenberg)

As for my test car’s dashboard, it included a digital speedometer and tachometer, plus a heads-up display that projected speed on the windshield. There was also a voice-activated system and a great touchscreen to control the car’s navigation and climate systems, as well as my test car’s $4,000 optional FM/SiriusXM Bowers & Wilkens audio system.

And like all Volvos, the V90 features Volvo’s very intuitive climate controls, which show a little illustration of a person and allow you to direct heating or cooling toward your head, feet or midsection. I consider those the best-designed climate controls on the market. 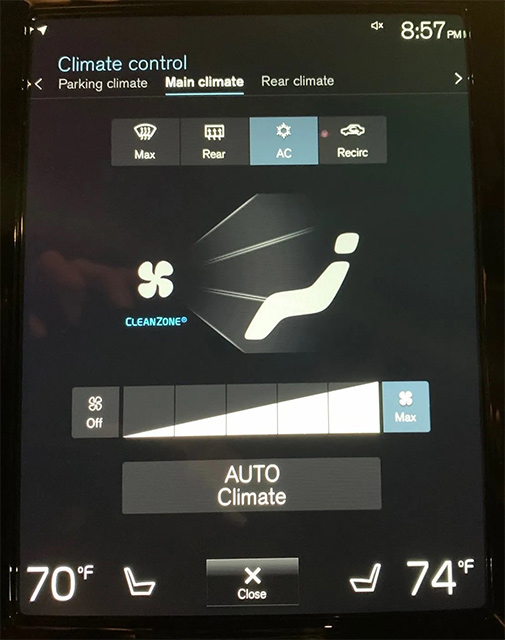 Additionally, my V90 came with a backup camera and optional 360-degree view as part of $1,700 advanced package (which added the heads-up display). 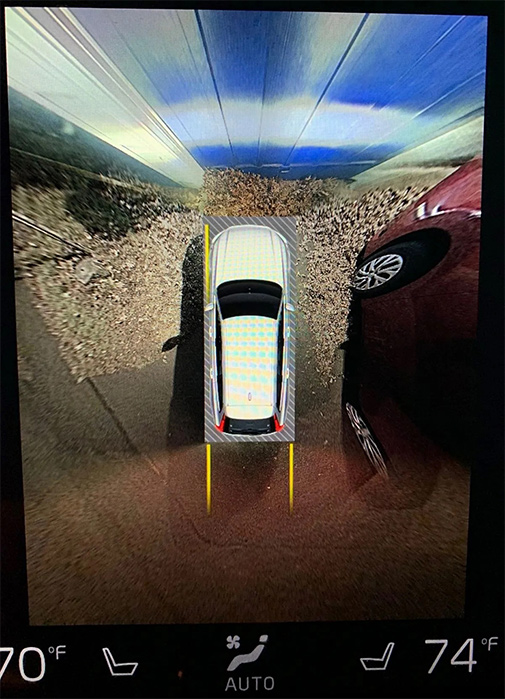 In back, the V90’s rear seats are fixed into place and nonadjustable. The driver’s and passenger’s side seats offered good headroom, but only okay legroom and hip room. Adults will find the space only semi-comfortable for city trips, and even more challenging for longer journeys. (Younger kids will be fine.)

And though the back seat is technically designed for three people, the center section offers very limited legroom and hip room that anyone other than a young child would find cramped. On the plus side, the rear seats have a great center armrest/cupholder that’s available for use when there’s no third passenger. 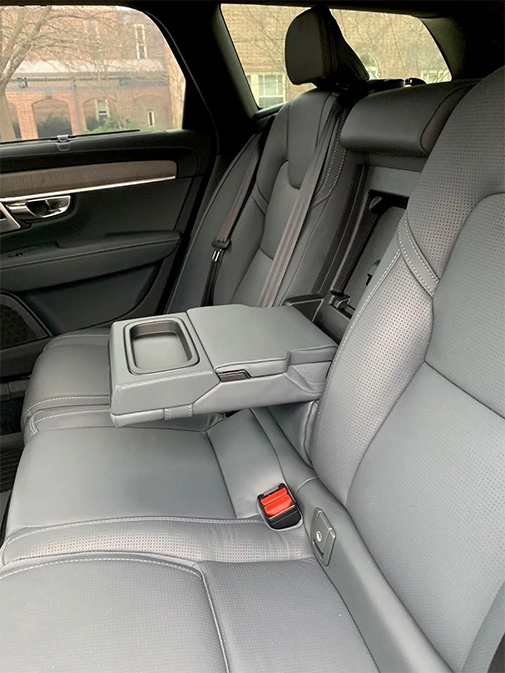 The V90’s back seats have good headroom, but legroom and hip room are less impressive. (Photo: Jerry Kronenberg)

My test model’s backseat also offered its own climate controls and vents.

My test V90 boasted a generous cargo area that could easily fit a small dresser or appliance such as a window air conditioner, even with the back seats in use. A great plastic mat came as part of a $485 Protection Package Premier option, which also added rubber floor mats for each seat. 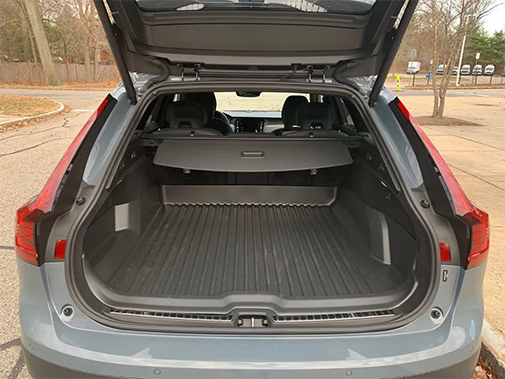 The Volvo V90 features a generous carbo bay that can carry plenty of stuff even when the rear seats are in use. (Photo: Jerry Kronenberg)

And if the standard cargo area doesn’t provide enough space for you, the V90’s rear seats easily fold flat, creating a truly generous cargo bay. The space could easily accommodate a fairly large piece of furniture such as a dresser, or perhaps six large suitcases and a few knapsacks.

On the road, my test model’s 316-horsepower four-cylinder turbocharged engine offered impressive performance, starting with a quiet ride. The V90 revved only to 4,400 rpm going from zero to 60 mph, with very little engine noise reaching into the cabin. My test V90 also offered four different drive modes – Eco, Comfort, Dynamic and Off Road – although I noticed little difference between them.

The U.S. Environmental Protection Agency rates the V90 T6 AWD at 21 mpg/city and 32 mpg/highway, thanks in part to the vehicle’s automatic start/stop function (which turns the engine off when you’re idling). During a weeklong test drive, I logged a combined 23 mpg.

Front sightlines are excellent and rear sightlines are good, while sightlines to the rear sides of the vehicle are acceptable but could be better. The model also braked and cornered well, while its modest size made parking and backing up fairly easy.

And of course, the V90 comes with Volvo’s famous steel cage and other safety systems. As noted above, I had the car flash an alert on the dashboard and apply the brakes automatically when its sensors detected the car in front of me was unexpectedly stopping. (Sorry, I was too busy avoiding a crash to take a photo.)