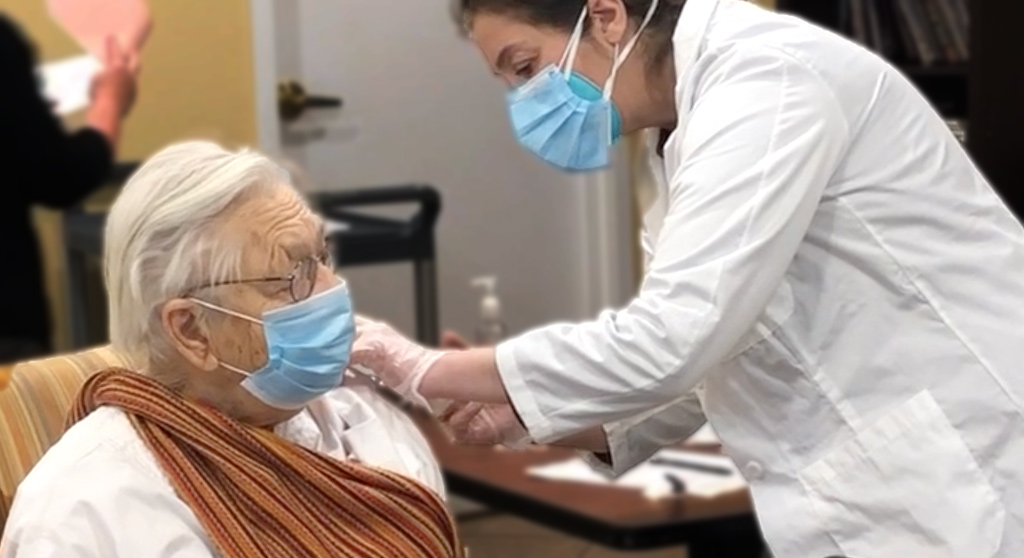 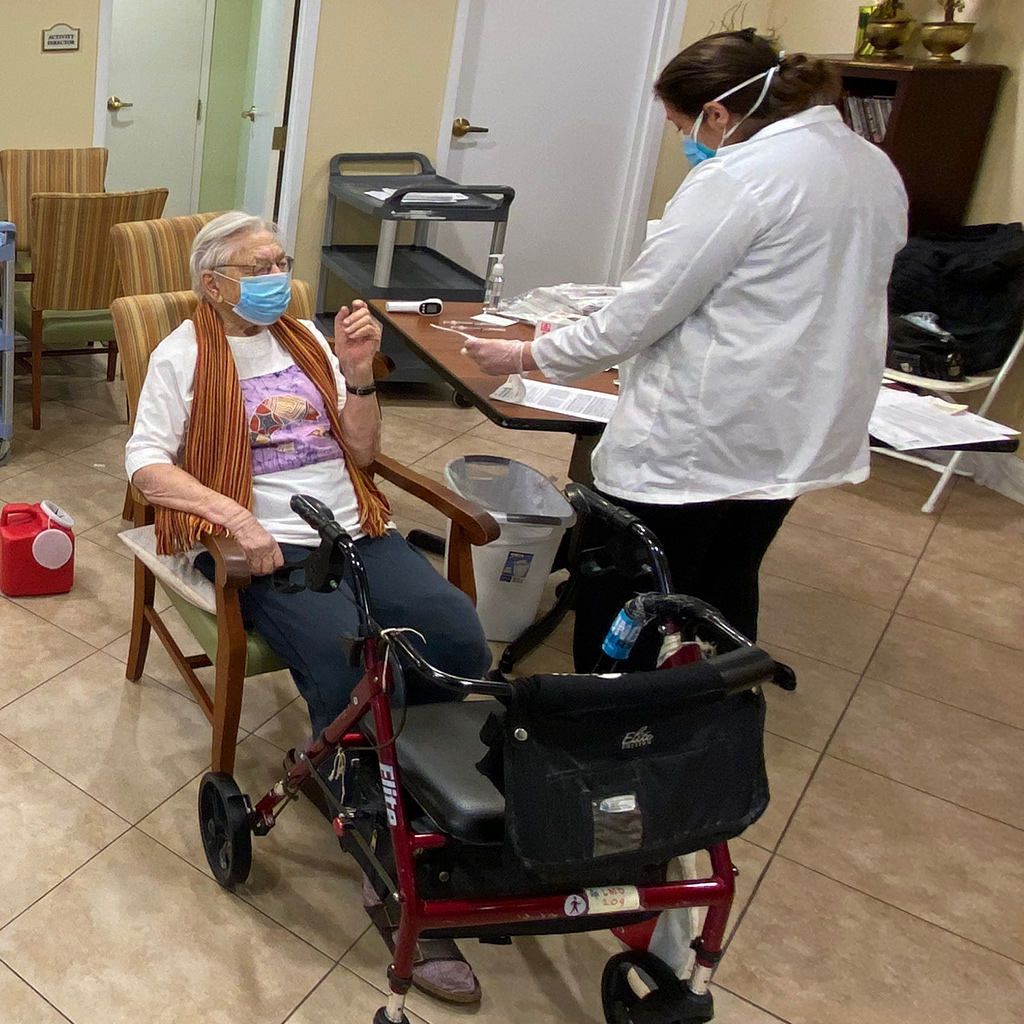 Thousands of older people who live in Cambridge become eligible for Covid-19 vaccinations in two weeks, yet it’s not clear who will give the shots and how. The same is true for essential workers, second on the list in the state’s Phase 2 category for coronavirus shots.

It’s part of confusion over vaccination priorities and supply from the top down. The state health department now puts people 75 and older at the top of the Phase 2 list, along with those with two or more serious health conditions that increase their risk if they get Covid-19, as well as tenants in public and private low-income housing developments for seniors. But the federal government introduced uncertainty this week by advising that anyone 65 and older be vaccinated now. (The first phase of inoculations included health care workers and residents and staff of nursing homes.)

The Cambridge Health Alliance had been planning to identify and communicate with its patients 75 and older about vaccination, but is now “awaiting guidance on how Massachusetts will proceed with updated information,” spokesman David Cecere said Friday.

The city health department is preparing a campaign to allay fears about the vaccine in communities of color. As for administering vaccinations, “our team will be prepared to assist vaccine distribution in any capacity as prescribed by the state,” chief public health officer Claude Jacob told city councillors Monday. According to U.S. Census figures, there are about 5,300 Cambridge residents who are 75 and older, and almost 13,000 who are 65 and older.

The state has not yet provided guidance. “I’ve been frustrated by the lack of planning and executions at the state level. We are well behind every New England state in number of vaccinations given per capita and we are currently 26th in the country,” vice mayor Alanna Mallon said Thursday in an emailed response to questions. “Here in the city, I hope we start to see a more fleshed-out version of how vaccinations will be handled throughout the phases to ensure effective vaccine delivery to our residents and workers. With the incoming Biden administration, things may start to move very quickly, and we need to be prepared when that happens.”

Gov. Charlie Baker did accede to a plea from providers of affordable senior housing, including the Cambridge Housing Authority, to move their tenants to the top of the Phase 2 list. The housing authority’s executive director, Michael Johnston, praised that decision but added that it shouldn’t have been necessary. Public housing residents could have been included in the federal program that used CVS and Walgreens pharmacists to vaccinate nursing home and assisted living residents and workers, he said.

The pharmacy partnership is already giving shots to tenants in private low-income senior housing that is financed by a different federal program, and “we serve the exact same population,” he said.

The Cambridge Public Health Department was also asked by Johnston to vaccinate tenants in CHA and other low-income senior housing developments in their own buildings. (The City Council’s Housing Committee voted Tuesday to support the request.) Johnston said Thursday he hasn’t received an answer, “but was told they would be planning for on-site vaccinations.”

Health department spokeswoman Susan Feinberg didn’t respond when asked if the department will vaccinate senior housing tenants onsite. On Friday, the city’s coronavirus update said the health department would play “a significant role” in vaccinating the public; that’s in Phase 3, estimated to start in April. The department has also started immunizing first responders – part of Phase 1. There was no mention of Phase 2, starting next month, where many of the questions remain.

Mallon spearheaded the push for onsite vaccinations in senior housing at Monday’s council meeting and at the Housing Committee. She said Friday the issue is “one of the biggest concerns I am hearing from residents and nonprofit affordable housing developers.” Mallon said Jacob “assured us that collaboration and partnership is happening” at Monday’s council meeting, though Jacob didn’t make a specific commitment.

She said she’s also hearing from food pantries and other organizations working to allay food insecurity, and their employees and others whom the state calls essential workers, including teachers, drivers, grocery workers and restaurant employees. They want to know where they fall on the list, how they’ll be notified that they can get vaccinated, and what evidence, if any, they must show of their job.

Mallon said she is “most interested in having clear plans on how to vaccinate our teachers and staff as quickly as possible” when it’s their turn in Phase 2, so schools can bring more students back to in-person learning.

Wary of the vaccine

Some scientists want less adherence to priorities and more relaxed standards, including the option of delaying a second shot past three weeks or a month, to get more people immunized more quickly. “A failure to act quickly and aggressively with this virus is costing lives,” Harvard T.H.Chan School of Public Health epidemiologist Michael Mina said Friday in a call with journalists. Mina said evidence from the clinical trials of one of the two approved vaccines showed that one shot could provide 90 percent efficacy after a month, although it wasn’t clear how long immunity would last.

“We should be doing everything to get the vaccine out,” Mina said. Anthony Fauci, the head of the National Institute for Allergy and Infectious Diseases, has disagreed, saying decisions should be made on the basis of science and the vaccines should be taken as they were tested.

Some people remain leery of vaccination, including health care workers who could be getting their shots now. The state isn’t keeping track of how many decline a shot, Baker said at a Jan. 7 press conference, because “people do have more than one chance to sign up, so I’m not really sure how you would collect that kind of data.”

Asked how many had turned down the vaccine at CHA, Cecere said 65 percent to 70 percent “of our frontline staff have been vaccinated.” Dr. Gerard Coste, who works at the health care system’s Covid-19 respiratory clinic in Somerville, prepared a video about the vaccine describing how he became convinced to get the shot; it has been posted on YouTube and CHA has sent it to other health care organizations.