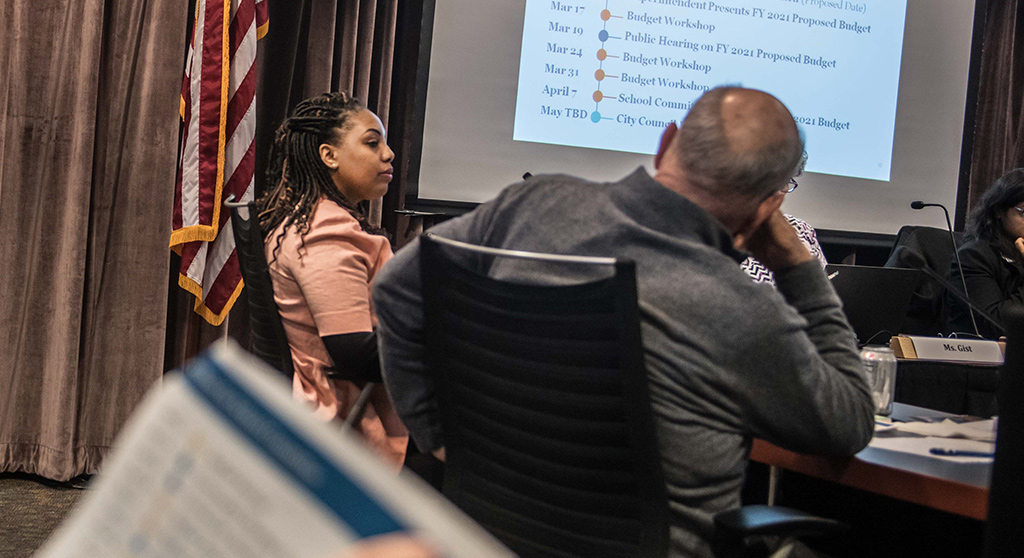 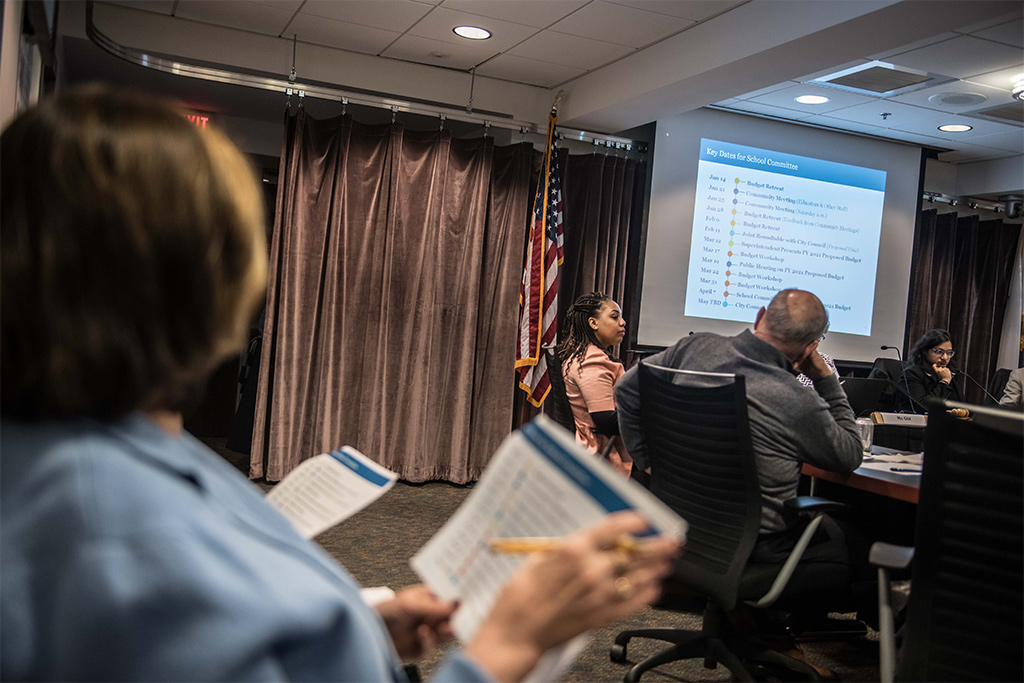 School Committee member Ayesha Wilson, seen in a pre-pandemic meeting, was a holdout on Tuesday’s vote on a plan to expand in-person classes. (Photo: Derek Kouyoumjian)

The first concrete step to expanding in-person classes across Cambridge Public Schools was taken Tuesday with School Committee approval of a plan by superintendent Kenneth Salim.

The proposal passed 6-1, with member Ayesha Wilson the sole vote against. A vote to prevent “reconsideration,” or further debate at future meetings, squeaked by 4-3.

A crucial aspect is the negotiations between the district and the Cambridge Education Association. Educators have expressed concerns about returning to in-person teaching in light of a citywide Covid-19 case surge and lack of trust in the district’s ability to adhere to safety measures. (Balloting on a no-confidence vote for school officials and district administrators goes through Friday, a CEA member said.)

Public comment was subdued though overwhelmingly in support of the proposal, a sharp contrast to the previous committee meeting, when more than 100 people with widely different points of view testified for more than three hours.

The proposal covered the basics, including a remote learning option; expanded in-person options for eligible students in grades four through 12; separate special education programs and Sheltered English Immersion programs for students in all grades; and changing two remote learning days, Jan. 27 and Feb. 3, to staff planning days. The district will keep reserving Wednesdays for remote learning for all students.

Under the plan, each principal and leadership team will tailor the requirements of in-person and remote learning to the unique set of conditions at each school.

The district plan to expand in-person classes perches on a classic chicken-and-egg dilemma: how to assign staff to in-person classrooms with an undetermined number of students.

As the district struggles to work out staff and student assignments, a major issue for educators is that the district changed how it evaluates and grants remote accommodation requests.

Many educators may have assumed that accommodations granted in the fall would apply to the entire academic year, committee member David Weinstein noted.

But the district shifted its criteria to align with the city’s guidelines and the need to bring more educators back into the classrooms as families select in-person learning, said Lisa Richardson, the district’s executive director for human resources.

A large majority of staff requests were granted, Richardson said: 192 due to child care issues, 32 medical requests and 272 personal requests, which will be effective through the end of the academic year. The district got 75 requests for remote accommodations that were not granted.

Families had been asked to select either in-person or remote learning for students by last Friday. Slightly more that half responded, Salim said, giving preliminary numbers for family requests at the elementary schools (57 percent in-person to 43 percent remote learning), upper schools (41 percent to 48 percent), and high school (32 percent to 67 percent).

Wilson asked for clarification on the percentages, and why only slightly more than half of families submitted the form.

Among the roughly 1,000 families not submitting the form, some didn’t respond because their current choice would be extended, while other families didn’t feel they had enough information to make a choice, said Lyndsay Pinkus-Brown, the district’s chief strategy officer. The district is continuing its outreach.

An updated enrollment report will be released next week, Salim said.

Member Rachel Weinstein, citing trust issues between the district, educators and families, proposed adding provisions that specify the required level of staff to students in remote classrooms; for school principals to develop their own classroom models; and for principals to present their plans to the committee in February. “I’m not particularly enthusiastic about the expansion proposal, even if it’s with the amendments I am proposing,” she said. “I think it is the best of bad options.”

Wilson said there wasn’t “a defined definition of what building trust looks like in this community. And I think that that’s really where we need to start doing this work, and doing it in a thoughtful way and in a transparent way.”

Salim said he appreciated the spirit behind the amendments, and that he incorporated educator views – relayed to him via frequent meetings with CEA president Dan Monahan and school leadership teams – into his decisions.

Some requested changes appeared to bypass the district’s oversight and approval process, including the request for school leaders instead of the superintendent to present school-level plans to the committee. Vice chair Manikka Bowman expressed concerns regarding the conversation around sharing power in light of the ongoing, private negotiations between the school district and the Cambridge Educators Association, and how the proposed changes could affect the school reopenings. It makes the process “way more complicated than it needs to be,” she said, since the framework to resolve these issues is already built into the system through negotiations between the union and the district.

She signaled that she would not support the amendments.

Ultimately two provisions were added: to maintain current staff-to-student ratios in remote classes, and for the superintendent to present the principals’ plans to the committee at its Feb. 2 meeting.

The administration was freed to enact the adopted proposal by a vote to prevent “reconsideration.” Any member may file for “reconsideration” of a motion within 48 hours of its adoption. If a reconsideration is filed, no action can be taken on the motion – essentially it is in limbo until the next committee meeting, where it will be discussed, possibly amended and voted upon.

Bowman, Fantini, member José Luis Rojas and Mayor Sumbul Siddiqui voted to close the door on reconsideration, while Rachel Weinstein and David Weinstein (no relation) and Wilson voted to allow it. The vote to not allow reconsideration means the administration can act immediately on the adopted motion without fear it could be put on hold for two weeks.