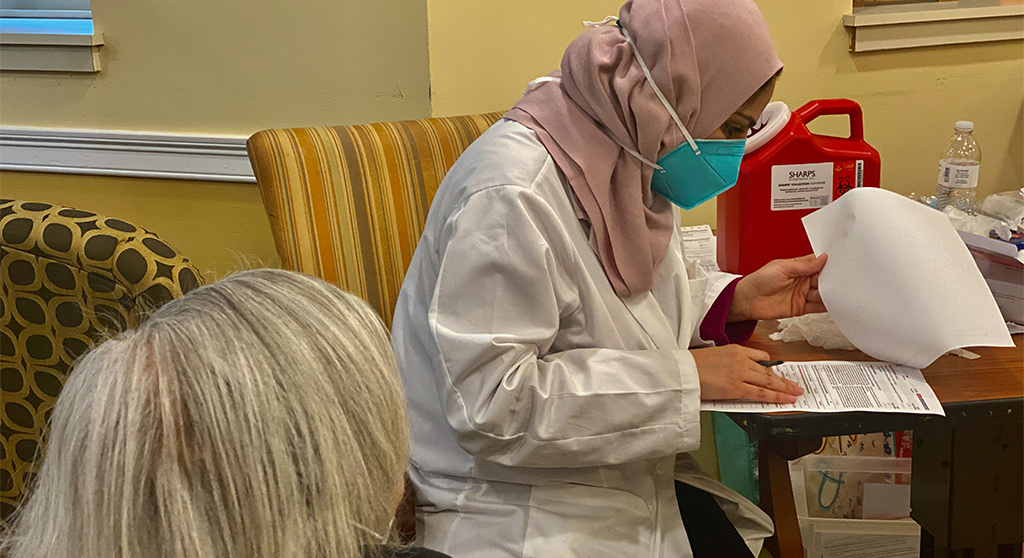 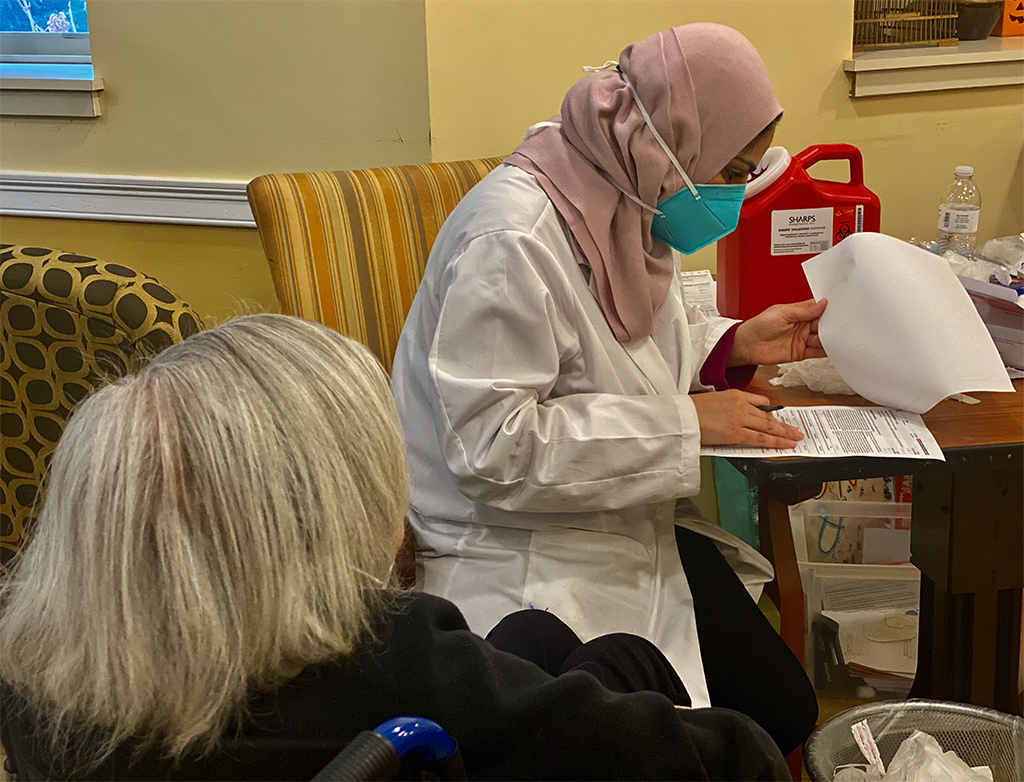 Amid the chaotic state rollout of Phase 2 of the Massachusetts Covid-19 vaccination plan, a Cambridge Health Alliance website crashed temporarily Wednesday when the Alliance started inviting patients 75 and older to make an appointment, and Cambridge public housing officials said they feared that a proposal to vaccinate frail tenants of low-income elderly/disabled housing developments in their buildings might be dead.

Several hours later the Alliance website returned, and on Thursday state officials tried to reassure operators, landlords and residents of affordable senior housing developments that the state would provide the necessary doses for onsite or local vaccinations. “There is a process behind the scenes to make this happen,” Emily Cooper, chief housing officer of the Executive Office of Elder Affairs, said in a Zoom conference call with 850 senior housing operators and residents. Officials of three state housing agencies also participated.

Still, Cooper said: “You may need to be patient” about getting the vaccine. Local agencies would need to give state officials details of proposed clinics and estimates of the doses needed. And onsite clinics in Cambridge affordable housing sites weren’t a done deal, at least in part because they require substantial staffing and advance education. The Cambridge Housing Authority and the Cambridge Public Health Department planned to have workers go door to door next week to persuade tenants to get vaccinated and get an idea of how many would accept a shot.

On Wednesday, people 75 and over were supposed to be able to sign up for an appointment for a vaccination at scores of state-sponsored sites in preparation for Phase 2, where that age group has top priority. Instead, they found missing appointment links, no appointments and a host of other frustrations.

In Cambridge, the Cambridge Health Alliance started sending invitations to patients 75 and older to make an appointment in its patient portal, MyChart. The site crashed and a telephone number for appointments had shut down for the day. MyChart returned within a few hours; however, CHA offered appointments at only two sites, Assembly Square in Somerville, and its Malden clinic, and only for the first two weeks in February.

Available slots at Assembly Square were on weekday nights only, while the ones in Malden were on weekends during the day. Alliance spokesman David Cecere said the health care system, which serves many low-income patients and Covid-19 hotspots such as Chelsea and Everett, is “developing plans” that follow government directives and guidance and “the vaccination process is evolving quickly.” He said the Alliance is “working on a central vaccination site that we hope to open when the state expands vaccine opportunities to residents and patients over the age of 65 and those with two or more co-morbidities.” (They are next on the list, along with residents of affordable senior housing).

The other Cambridge hospital, Mount Auburn Hospital, is part of the huge Beth Israel Lahey Health. Beth Israel Lahey is first inviting patients who live in Covid-19 hot spots along with randomly selected others across the state, according to a statement from the organization. There is a vaccination clinic in Cambridge; the statement didn’t disclose where.

Referring to the state rollout in general, not the Alliance or Mount Auburn, State Rep. Michael Connolly of Cambridge tweeted Wednesday: “Well, I would have liked to spend the day working on my agenda for the new legislative session – but instead, I’m trying to figure out why [the governor’s] plan for Phase II Covid-19 vaccinations depends on people having a good Internet connection, tech skills and an automobile.”

As for seniors in low-income housing, the Cambridge Housing Authority had joined other public and private affordable housing operators in lobbying the state to give higher priority to their tenants. In Cambridge they are among the poorest residents in a wealthy city; Covid-related deaths among housing authority residents, as reported to the authority, are disproportionately high when compared with public housing residents’ share of the total city population.

The state did move affordable senior housing residents into the priority list, to second in Phase 2, along with people with two health conditions putting them at increased risk from coronavirus. But they disappeared from the list when state officials suddenly elevated residents 65 and older to the second-place category as well, alarming low-income senior housing operators.

Then the state sharply reduced vaccine allocations to local health departments, including the Cambridge Public Health Department, which was being urged to conduct onsite vaccination clinics for affordable senior housing residents. The local agencies would get only 100 doses a week. Asked what the Cambridge health department could do with the reduced allocation, spokeswoman Susan Feinberg said, “Not much.”

Despite appearances, the priority list hasn’t changed, state officials said in the Thursday Zoom call. “If you’re concerned about the graphic [of the state plan that left out affordable senior housing] it was revised to be more simple for the average reader,” said Robin Lipson, Elder Affairs deputy director. And officials said that if local health departments planned to conduct onsite vaccinations at low-income senior housing sites, the state would provide the necessary doses in addition to their regular allocation, after housing agencies submitted the required paperwork.

The officials also reiterated another option – have residents in the permitted age categories get vaccinated at state sites such as Fenway Park or Gillette Stadium. That affronted housing authority executive director Michael Johnston and commissioners at a CHA meeting Wednesday.

“They’re telling us we should be advising our folks to go to a mass vaccination site,” Johnston told commissioners, referring to statements by Health and Human Services Secretary Marylou Sudders on a public conference call. “Have 75-year-olds with a walker or a wheelchair go to Fenway [Park]? It doesn’t make sense, especially in a state where they’re not distributing all the vaccine.”

Commissioner Elaine DeRosa, former head of the anti-poverty agency the Cambridge Economic Opportunity Committee, joined in the criticism: “Let’s get a bus of 75-year-old people and take them to Gillette [Stadium]. It’s outrageous.”

On Thursday, Johnston didn’t reply to an email asking whether he had been reassured by the Zoom call. Vice mayor Alanna Mallon, who has spearheaded efforts to have the health department conduct onsite vaccinations, said: “Navigating the current state system assumes these seniors have a car, access to the Internet and the ability to navigate multiple confusing sites, which is why I advocated for vaccines to be administered onsite to alleviate these challenges.

“I’ve spent the last two days working with seniors to navigate this system, which has been heartbreaking and frustrating. I hope the Baker administration rectifies this inequitable system to include onsite vaccinations at elderly low-income buildings who request it once we move into the next phase of 65-plus. Our vulnerable seniors’ lives are at stake.”

This post was updated Feb. 2, 2021, to attribute quotes to Emily Cooper, chief housing officer of the Executive Office of Elder Affairs. In a previous version they had been attributed to a different state official as heard in a Zoom call.