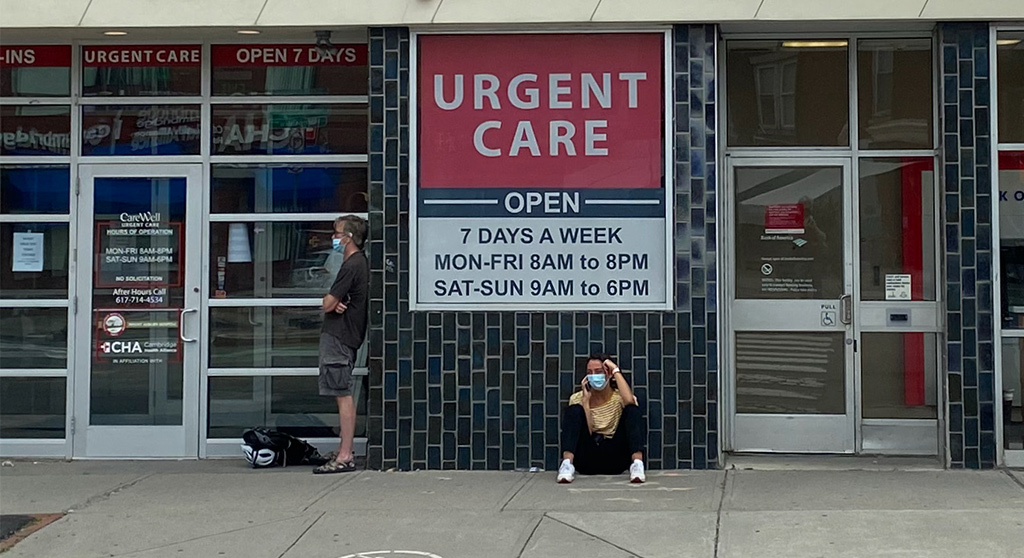 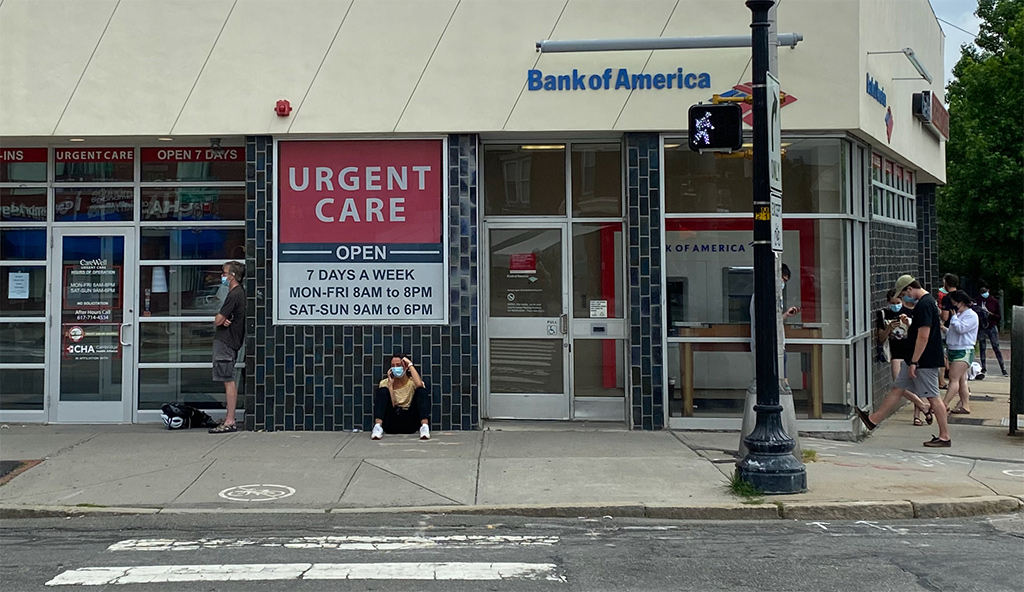 People line up for Covid-19 tests in July at a CareWell Urgent Care clinic in Inman Square. The chain has since offered vaccinations. (Photo: Marc Levy)

CareWell Urgent Care is telling some patients who got their first dose of Covid-19 vaccine at a CareWell clinic that the company can’t honor appointments for their second shots because it’s out of vaccine. A state Department of Public Health official said Friday that the state will deliver second doses to the company when it gets “a survey request for vaccines” from CareWell.

The official, who spoke on background, reiterated that the state has “been clear that we will ensure second doses to vaccinate all individuals who received first doses” at state vaccination sites. CareWell has clinics in Inman Square and near Fresh Pond.

Andrea LePain, a spokeswoman for the company, said the state “indicated [Friday] that they may be sending a new allocation of doses as early as next week.” She provided a statement from chief executive Shaun Ginter saying the state couldn’t “replenish our vaccine supply” because of “inventory and other logistical challenges” but pledging to provide second doses “to eligible residents at all 16 [CareWell] clinics in Massachusetts.” CareWell has administered 6,000 doses of vaccine, Ginter said.

State Rep. Mike Connolly of Cambridge said the reports of CareWell patients not being able to get their second doses are “just the latest issue in what has been a terribly chaotic and inequitable vaccine distribution effort led by the Baker administration.”

Health and human services secretary Marylou Sudders told a state legislative hearing Thursday that the Department of Public Health had “disenrolled” some urgent care clinics because they allegedly gave vaccine to ineligible people and didn’t report properly to the state immunization registry. Sudders didn’t name the clinics; however, The Boston Globe has reported that to avoid wasting vaccine, CareWell offered leftover doses to people who didn’t qualify under the state vaccination plan.

LePain, the CareWell spokeswoman, denied that CareWell had been disenrolled. She couldn’t immediately say if the company was expecting to get any more vaccine from the state for first doses.

The two vaccines approved in the United States so far require two doses: 21 days apart for the Pfizer vaccine and 28 days for the Moderna vaccine. Public health officials say people should get the same brand of vaccine at the same clinic for both doses. This weekend federal officials are expected to approve a third vaccine, by Johnson & Johnson, that requires one dose; supplies will be limited at first.

The federal government’s shipments of vaccine to Massachusetts, about 140,000 doses a week, are for first doses, Sudders said at the Thursday hearing. She said federal officials have guaranteed the state that they will provide the required second doses.