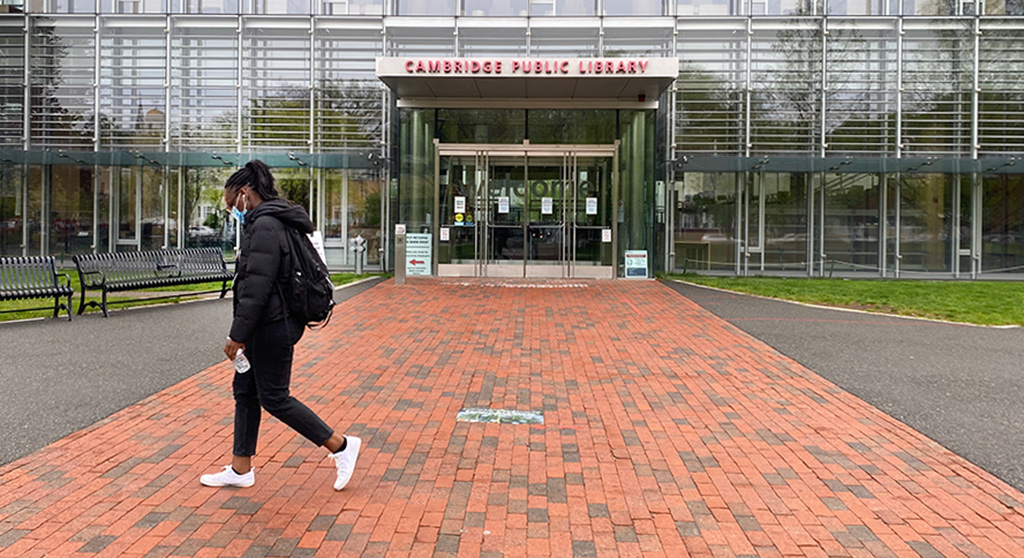 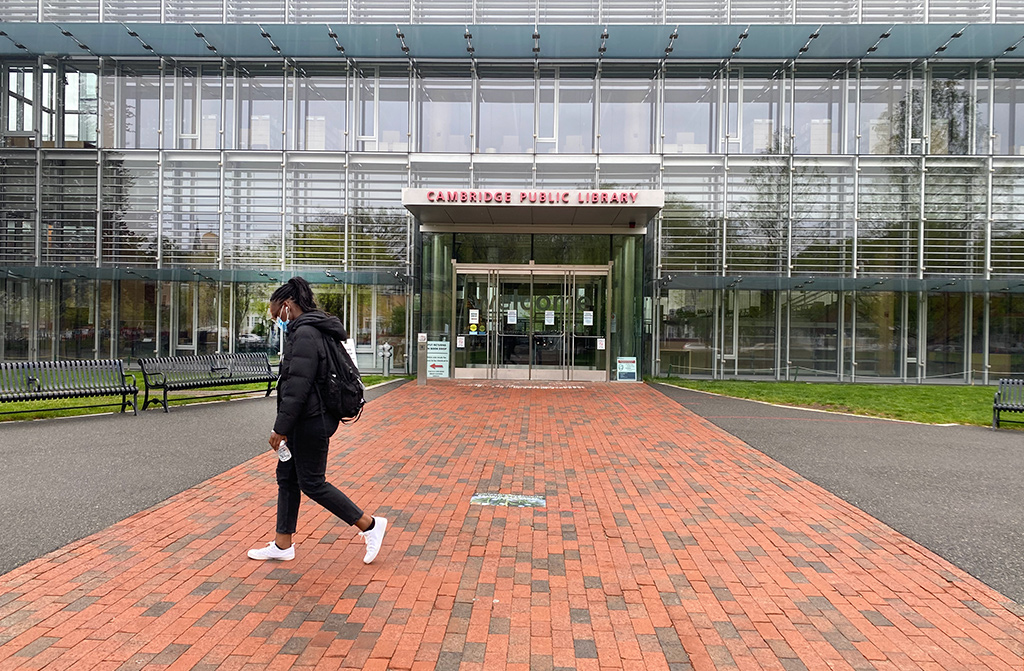 The Cambridge Main Library has reopened its doors after a long shutdown undertaken as a coronavirus safety measure. (Photo: Marc Levy)

The Cambridge Main Library has reopened its doors for people to browse five days a week, with no limit on how many can be inside (short of a fire code violation) or how long they can stay (except for closing times of 4 or 7 p.m., depending on the day). The catch in this “Library Express” that began Wednesday is that there’s nowhere to sit.

“It’s still limited in terms of what one can do. It’s really to familiarize people with being back in the space, and welcome people back,” said Maria McCauley, the city’s director of libraries.

(The main library patio is open with seating, and there are “a handful of seats for seniors” if they need to rest for a moment, said Jason Yee, assistant director.)

More seating, access to computers and browsing in additional areas, including the Children’s Room, are expected in the second half of June, and branch locations should transition from contactless pickup to the main location’s “Library Express” approach in late June or early July.

“We’re working very hard behind the scenes to roll out plans for that. And we hope to have an announcement soon. The logistics of turning over six branches from contactless holds is just taking a little bit of time, and we want to make sure that we can also continue to expand service at the main library,” Yee said.

It cannot be said with certainty when libraries will be back to how it was before the coronavirus, McCauley said in a Wednesday call. That includes access to never-used spaces at the main library called The Hive, Tech Bar and Learning Lab that are devoted to science and the arts. “We’re trying to make sure we’re in step with how the [rest of] the city is reopening,” she said.

The aim for the rest of this calendar year is to get libraries back to where they were before March 13, 2020, McCauley said, when the main library and six branch locations were open a collective 313 hours a week.

The proposed $16.2 million budget for the fiscal year that begins July 1 includes branch library hours increasing by 19 percent over pre-pandemic levels, though.

While some branch-hour expansion could “possibly” happen before Jan. 1, “we actually have a lot of hiring to do too to make that [expansion] continue through the whole fiscal year.” (The number of staffers is expected to stay at 82, with 61 of those at the main library, according to the current submitted budget.) “I don’t have any timeframe” for expanded hours, McCauley said, “but my intention is that we will have expanded-hour branches [in the coming] fiscal year.” That ends in the summer of 2022.

The library system’s slow approach to reopening has frustrated some city councillors and members of the public who have seen libraries in surrounding cities and towns – including Arlington, Belmont and Watertown – already reopened partially by February, including allowing people inside for browsing. McCauley and Yee offered no insight into the decision-making, at times ignoring questions they were asked to stick to on-message generalities about safety, consultation with other city departments and how “other cities might have had different circumstances around the pandemic in their very localized area.”

“I’m really proud of our work. I think that we actually did quite a bit. There were many different iterations of service during this time,” McCauley said, and staff “really came together during the pandemic to be able to offer these services.”

Whenever branch reopenings and expansion happen, all locations are expected to offer at least five days and three nights of service weekly, and Saturday hours will be offered at three branches. In a May 18 budget hearing, McCauley told city councillors that the O’Neill branch in North Cambridge was one of them.

The specifics around the added hours aren’t public, but according to a Wednesday email, before the pandemic the Central Square branch and Wellington-Harrington’s Valente branch were open six days a week; the O’Connell branch serving East Cambridge was open all five weekdays; and there was four-day service at the remaining three branches: for the O’Neill branch, weekdays minus Tuesday; for the Collins branch in West Cambridge, weekdays minus Wednesday; and for the Boudreau branch on Observatory Hill, weekdays minus Thursday. No Cambridge library has Sunday hours.

O’Connell branch hours were supposed to increase in 2020, “and although the pandemic disrupted us, we look forward to … fulfilling that commitment,” McCauley told councillors May 18.

Councillors didn’t ask at their May budget hearing about Sunday openings. Councillor Patty Nolan questioned whether expanding hours was as smart a move as simply shifting hours based on use – away from weekdays when libraries might see less traffic and into evenings and weekends. But the move to expand hours was based on patron input during a strategic planning process in 2019 and subsequent open hours study in early 2020, McCauley said.

The hearing revealed hopes for a full revamp of the Central Square branch, where short-term fixes made during the pandemic have include replacing furniture, shelving and computers, as well as some drywall touchup and repainting. “We replaced a bubbler, [which] seems like a little thing but it’s a big celebration because it wasn’t working for so very long,” McCauley said. “What I would like very much to happen is a complete overhaul of the Central Square branch so that it can be just as dignified and beautiful and exceptional physically as the main library and as the Valente branch and so many of our branches. The community deserves that.” A building program study is in the works to assess what a renewed branch would offer and look like, she said.

One of the few municipal hires in 2020 was for a Central Square branch social worker, and vice mayor Alanna Mallon asked what hire Marie Mathieu had been doing since March, considering the branch was closed. Mathieu has been “onboarding” with staff and local and national groups, helping people who are referred to her and “working to build relations with unhoused folks in the immediate vicinity of the Central Square library,” McCauley said. The hire went without public acknowledgment until the budget hearings, and the position and its services are not noted on the library’s website.

Also not quite explained by the library system was the meaning behind “Library Express,” in which the city borrows a term typically used by eateries to indicate faster and more efficient service, often enabled by advanced technology but with trimmed-down options. In this case, it was more about patrons speeding things up.

The term is a hangover from when the library planned to have timed entries for patrons by appointment, allowing a few in every half-hour and limiting their time inside. “Things have changed a little bit” from the period just before Gov. Charlie Baker announced the state was dropping its mask mandate, McCauley said. But the name stuck because “we’d already kind of labeled it.”