A story of enslavement; a Juneteenth reflection 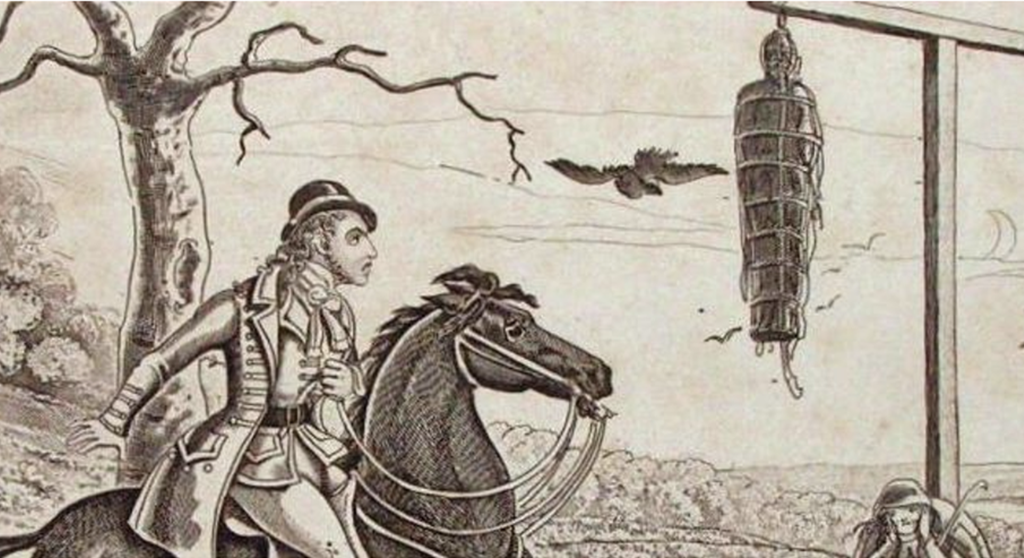 A story of enslavement; a Juneteenth reflection

This week’s column is written in recognition of Juneteenth, which celebrates June 19, 1865, as the day when federal troops arrived in Galveston, Texas, to announce that all enslaved people were free – two and a half years after the signing of the Emancipation Proclamation. State Reps. Bud L. Williams and Maria Duaime Robinson introduced a bill making Juneteenth an officially recognized holiday in Massachusetts, which Gov. Charlie Baker signed into law in July.

Trigger warning: This article contains violent content that may be disturbing to some. This brutal account is an essential part of America’s historical record.

Engraving of a man on horseback passing a gibbet. (Photo credit: University of the West of England Bristol)

Listen, my children, and you shall hear
Of the midnight ride of Paul Revere,
On the eighteenth of April, in Seventy-Five:
Hardly a man is now alive
Who remembers that famous day and year.
From “Paul Revere’s Ride” by Henry Wadsworth Longfellow (1861)

Missing from the iconic poem “Paul Revere’s Ride” is any mention of Mark, an enslaved person. In his own recounting of the ride, Revere uses Mark as an well-known landmark: “After I had passed Charlestown Neck and got nearly opposite where Mark was hung in chains, I saw two men on horseback, under a tree …”

To today’s reader, normalizing this kind of suffering may be shocking. Who was Mark, and why was he hanging from chains in the middle of the night on April 18, 1775?

The enslaved person, Mark, had been hanged on Gallows Hill in Cambridge; his body had been on display in Charlestown, rotting, for more than 20 years.

The strange tale of Mark and Phillis

On Sept. 6, 1755, Middlesex County Sheriff Richard Foster was given a warrant to execute two enslaved people named Mark and Phillis for the crime of petit treason – a charge of aggravated murder of a master or social superior by a servant or enslaved person.

“Thursday last, in the Afternoon, Mark, a Negro Man, and Phillis, a Negro woman, both Servants to the late Capt. John Codman, of Charlestown, were executed at Cambridge, for poisoning their said Master, as mentioned in this Paper some Weeks ago. The Fellow was hanged, and the Woman burned at a Stake about Ten Yards distant from the Gallows [in Cambridge]. They both confessed themselves guilty of the Crime for which they suffered, acknowledged the Justice of their Sentence, and died very penitent. After Execution, the Body of Mark was brought down to Charlestown Common, and hanged in Chains, on a Gibbet erected there for that Purpose.”

In court documents dated Sept. 18, 1755, Foster says he executed the warrant against both: Phillis was burned to death, and Mark was hanged by the neck until dead between the hours of 1 and 5 o’clock on that day. The executions took place at what was known as Gallows Hill, near Porter Square in the vicinity of 15-19 Lancaster St.

Being burned at the stake is an excruciating way to die, and only two people – both Black women – have been executed this way in Massachusetts. In 1681, Maria tried to kill her enslaver and was executed in Roxbury; Phillis spent her last moment in our city being incinerated, her pain and anguish on public display. According to research, the beginning of this burning process causes extreme pain until all the body’s nerves are burned away; for Phillis, the probable cause of death was smoke asphyxia.

After Mark was pronounced dead, his body was taken to Charlestown, where he was gibbeted, or bound in chains, suspended from a gallows-type structure and displayed as a deterrent to potential criminals.This fate was typically reserved for pirates. Mark’s body remained at Charlestown for an astounding 20 years and became a well-known landmark. The gibbet was near the Charlestown Common.

To anyone who has broken free from the oppressive white supremacist narrative that pervades our country’s history, this report of regret from two enslaved people about to be executed defies belief. In all the research done by this writer exploring how enslaved people felt, there wasn’t a single one who was not contemptuous of systemic American slavery or those who implemented it. A once enslaved man, Robert Falls, is quoted at the age of 97 by interviewer Della Yoe:

“If I had my life to live over, I would die fighting rather than be a slave again. I want no man’s yoke on my shoulders no more.”

To learn more about Mark and Phillis and the experiences of enslaved people during this period, check out these resources:

This post was updated June 15, 2021, to correct the description of what is seen in the illustration.