‘Val’: Kilmer, cinematographer of his own biopic, charming us anew through wit and perseverance 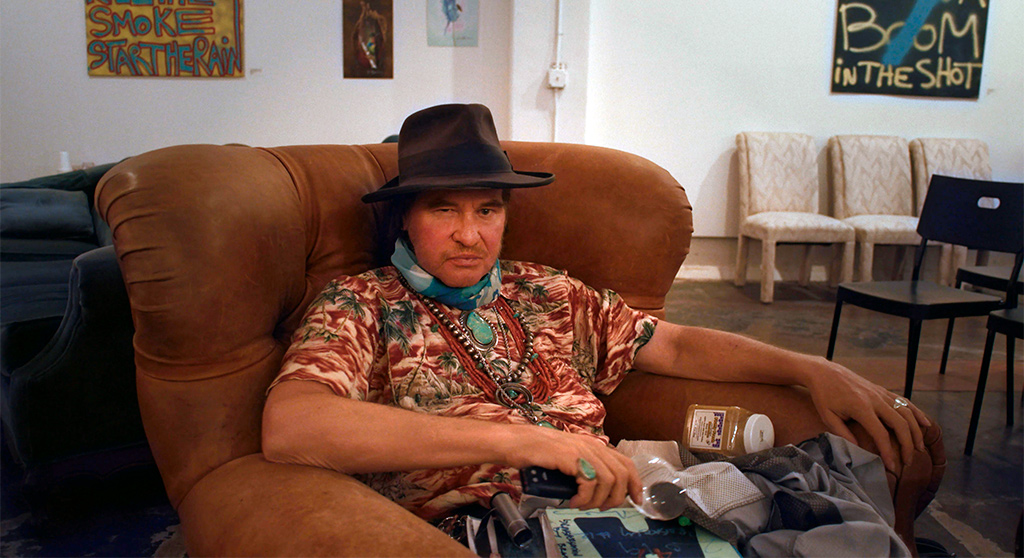 ‘Val’: Kilmer, cinematographer of his own biopic, charming us anew through wit and perseverance

I’m not sure I’d be writing this review if Val Kilmer didn’t videotape nearly every step of his life, or if the notoriously mercurial actor wasn’t in such a vulnerable state. Besides being the subject, Kilmer has credit as the cinematographer, and it makes great sense that editors-turned-first-time directors Ting Poo and Leo Scott helm the project; you can feel that much of the work was educing the narrative from Kilmer’s deep digital vault. We also often witness the current Kilmer, withered and with a voice greatly impaired by throat cancer – which is why much of the narration is left to his son, Jack. The confluence of highs and lows and Kilmer’s keen wit (if you didn’t know he’s something of a comedian, you’ll leave the film with a new appreciation) make for a deeply intimate and balanced retrospective.

Kilmer, whom we came to know as Iceman, Tom Cruise’s nemesis in “Top Gun” (1986), and later as Jim Morrison incarnate in Oliver Stone’s “The Doors” (1991), makes few apologies for things said and done, and fully embraces his situation. “I have behaved poorly. I have behaved bravely. I have behaved bizarrely to some. I deny none of this and have no regrets because I have lost and found parts of myself that I never knew existed,” Kilmer says at one point, adding, “and I am blessed.” Some lowlights: The actor came from a broken family, and one of his two brothers drowned in the family hot tub when he was 15. After Kilmer notched early successes, his father bilked him for money. And there was a tumultuous marriage to Joanne Whalley, whom he fell in love with from afar after seeing her on stage; the marriage came after they worked together on Ron Howard’s wistful fantasy flick “Willow” in 1988, but flamed out quickly as egos and Kilmer’s method acting (blasting Doors music 24/7 for over a year) triggered frequent clashes. We also see a young Kilmer getting cast as a Broadway lead, then informed he’s being bumped down to a lesser part when the production secured Kevin Bacon, then knocked down another rung (playing the fool in the play) when Sean Penn joins the cast. There’s a great, funny moment when the two actors drop their trou and give Kilmer a friendly, two-moon salute.

One of the more interesting chapters, in which we get a peek into Kilmer’s commitment to craft as well as his edgy side, comes from his footage from the set of the “doomed” 1996 production of “The Island of Dr. Moreau,” when Kilmer had a chance to work with his idol, Marlon Brando. But the Brando that’s depicted appears to be the same thespian imp that caused Francis Ford Coppola fits on the set of “Apocalypse Now” (1979), and Kilmer had deep disdain for brought-in-to-finish-the-film director John Frankenheimer (“The Manchurian Candidate,” “52 Pick-Up”) because of a project management style that Kilmer felt was grossly dismissive to his method-acting roots. It’s a telling behind-the-scenes look at the process and the potpourri of egos that can go off track over the smallest nothing. More recently, we get to drink in Kilmer convincingly inhabiting his literary icon, Mark Twain (whom he calls the original stand-up comic) in his solo stage play, “Citizen Twain.” At the time he was preparing to do a film version of the play, the cancer crept in and took center stage. Throughout, it’s pretty clear Kilmer’s a survivor, one who perseveres and looks for the silver lining no matter if it’s life that gives him the bad deal or he’s the maker of his own misery. It may be hard to see in that once-handsome mug, now wisened and winnowed, but you can always find the puckish twinkle of hope, humor and optimism in the corner of his eyes.